Alibaba shares rose sharply on Monday after the ecommerce group founded by billionaire Jack Ma said a record $2.8bn fine at the weekend marked the end of an antitrust investigation into the company.

Executives told an analyst conference that while regulators were still probing China’s broader tech industry over past mergers and acquisitions, they did not know of any more specific investigations into Alibaba’s business. The company’s Hong Kong-listed stock rose 6.5 per cent after the remarks.

“Other than the mergers review, we’re not aware of any other [antitrust issues],” said Joe Tsai, executive vice-chair of Alibaba, in a call with analysts. “We are pleased we can put this matter behind us,” he added.

China’s market regulators slapped the fine on Alibaba, worth 4 per cent of its 2019 domestic revenues, for anti-competitive practices against merchants using its ecommerce platform.

While the amount was a record for the country’s previously light-touch regulators, it was less than the maximum 10 per cent penalty possible under the regulations.

The antitrust investigation into Alibaba has been just one of the problems facing Ma. The $37bn planned offering of Alibaba’s sister payments company Ant Group was cancelled at the last minute at regulators’ request in November.

Ma has made only one brief public appearance since October, when he had given a speech at a forum in Shanghai that many believed offended China’s regulators. Authorities have also issued regulations restricting online lending, one of Ant Group’s former growth areas.

Regulators first announced their investigation into Alibaba in late December, sending its shares down 13 per cent in the period up to last week.

While Saturday’s fine marked the end of the probe, the group will have to comply with a “comprehensive rectification” programme, as well face scrutiny over past mergers and acquisitions.

In December, Alibaba received a nominal fine for failing to seek regulatory approval for past deals, ending a period in which foreign-listed firms had been de facto exempt from such approvals.

Alibaba and Chinese social-media rival Tencent are among Asia’s biggest dealmakers, investing in hundreds of start-ups every year.

“M&A investigations will have a very small impact on Alibaba,” said Huang Wei, a lawyer with Tian Yuan Law Firm. “According to the antitrust law, companies that don’t declare [deals] will only get a fine of up to Rmb500,000 ($76,300). Even if [authorities] fine a few hundred cases from Alibaba, that’s still a very small amount of money for them,” Huang said, adding that regulators were planning to amend the law to raise the maximum punishment. 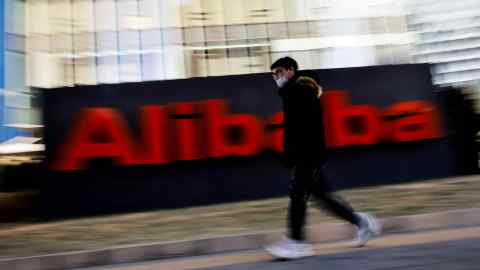 In its ruling on Alibaba’s anti-competitive practices, China’s State Administration of Market Regulation said the company had forced merchants to list exclusively on its shopping platforms, a practice known as “choose one of two”. On Monday, Alibaba said it would spend “billions of dollars” on initiatives to improve merchants’ experiences.

“We don’t need exclusivity arrangements to retain our merchants,” said Alibaba chief executive Daniel Zhang. He said the company would reduce the cost for merchants operating on its platform by, for example, offering some services for free.

Zhang added that the group would not appeal against the decision. That marked a contrast with Alibaba’s more assertive stance towards regulators six years ago, when it fought back against government criticism over counterfeit goods. On Saturday, Alibaba praised regulators as having “thoughtful” expectations for the internet industry.

China’s emboldened antitrust regulators have opened a frenzy of actions against tech companies, releasing guidelines to cover the sector in March.

But global investors should conclude from the antitrust push that regulators have backed Alibaba’s business model, coining in law the term “platform economy”, Tsai said.

“Our business model is fully affirmed by the regulators as good for the country’s economy and promoting innovation,” said Tsai, adding that the company was aligned with the government’s policy of digitising the economy.