My personal style signifier is my long hair. I’ve cut it short and shaved it all off before, but I feel my best when it’s long – it goes well with my dancing. My stylist is Eva Guide at Amour Cheveux Club, in République. I don’t use any special products – just Le Petit Marseillais shampoo. amourcheveuxclub.com

The last thing I bought and loved was a black sculpture. I went to the flea market in Saint-Ouen, and just as I was leaving, I saw it. The seller told me he picked it up in America years ago but he didn’t know who made it. It’s very heavy, and it reminds me of a big door, one which opens onto another world. It was expensive but I negotiated well – Saint-Ouen is full of enthusiasts, so if you show them that you’re passionate about something, in the end it comes off.

A place that means a lot to me is my best friend Marion Motin’s house in Normandy. Marion is a dancer and choreographer, and she has a house in the middle of the dunes, by the sea, in Agon-Coutainville, where I have been going for quite a few years. It’s often very cold there, with a chill that slaps you in the face. Every time, it re-focuses me and brings me back down-to-earth.

The last podcast I listened to was Picasso: Séparer l’homme de l’artiste, an episode from Julie Beauzac’s feminist podcast series. It really upset me. I had no idea the guy was such a monster. It’s a subject I’ve thought about a lot as an artist: the human side versus the arrogant part inside the artist that says, “I have to spit this out, loud and proud – just shut up everyone, and listen to me.” Sometimes I wake up in the morning and I feel like there is a kind of rage inside me. I have friends who try to keep me grounded, but at times they also extinguish a flame of creativity. You have to move mountains to be an artist. It’s not easy.

My style icon is John F Kennedy Jr. I like his flow: a bit chic, but poetic and sporty at the same time. He always broke the mould a little bit: he would wear a suit, his shirt a little bit open, a baseball cap worn backwards. He had a lot of charisma.

The more space there is for dancing, the better I feel

I have a collection of about 100 stones, kept between my house and my father’s house. I’ve collected them since I was little; I wanted to be an archaeologist as a child. Actually, I feel a bit like an archaeologist in what I do today. I have my bodies – my dancers – and I’m polishing them. I’m looking for things, searching for materials and colours. I still receive a lot of stones as gifts, as my friends and family know I love them – one person gave me a stone from Tahiti in the shape of a shark’s tooth.

The best gift I’ve given is a photograph of all my six aunts for my Portuguese grandmother Mamie Berta. One of my aunts was very ill, so I rounded up all the sisters from all over France, and asked my friend to do a shoot with them. They hadn’t seen each other for ages, and we got a photograph of the whole family together.

The last item of clothing I added to my wardrobe was a pair of Nike and Comme des Garçons sneakers I bought in Paris – they’re very cosy.

The best advice I ever received was not personal to me, but it’s a phrase from the German choreographer Pina Bausch, who said: “Dance, dance, otherwise we are lost.” It was something I learned in breakdancing battles when I was young. Lots of people would stand on the side talking and trading insults – it was brutal. The most important thing to do was stop talking and dance.

The last music I downloaded was “#20” by Aphex Twin. Earlier this year I did a one-week residency, staying in a beautiful house in the south of France called La Villa Galaxie. Every morning, I got up and listened to this music in the middle of the forest that surrounds the house. It was like being in a parallel universe. rivieraprod.fr/villa-galaxie

In my fridge you’ll always find coeur de boeuf tomatoes and mozzarella from Carrefour. It’s not stylish, but I don’t have much time for grocery shopping as I’m always working. Those two things go with everything – salad, pasta. I also have Mr Freeze ice pops. They’re the best. Very cheap.

Some of my best ideas come from letting go

I recently rediscovered New York. The city gave me an early career boost when I was touring with Christine and The Queens, and it opened up a lot of possibilities for me. It’s not a city I’d like to live in, but it has an energy that makes you feel like you can start from nothing and do great things. In France, I feel like there are lots of boxes and labels. In New York, you can be a musician, who owns a clothing label, who makes headphones, who does collaborations – you decide where you’re going in the world. Plus, I love Boom Boom Room at The Standard hotel.

An indulgence I would never forgo is roast chicken, especially from Villa Magnan, a beautiful guesthouse in Biarritz. I would go there just to eat their roast chicken. It’s incredible. A true Sunday roast, cooked in the oven with potatoes. instagram.com/villamagnan

The best gift I’ve received is a drawing by a friend. I was going through a complicated period, working very hard for my first show at L’Olympia in Paris, and I wasn’t really in contact with my friends. I felt very alone. A friend waited for me at home and gave me this picture, of my dancers against a blue sky.

An object I could never part with is my blue stone, a lapis lazuli I bought in Brussels. It’s a beautiful shape and has sat on my bedside table in my last three apartments. I don’t know why it intrigues me so much, but it makes me feel good.

My favourite room in my apartment is the living room, because it’s where I dance. I keep my home quite empty and minimalist – the more space there is for dancing, the better I feel. I’ve been practising for my new show, Maison d’en face, opening at the Théâtre du Châtelet in April. I just moved to a new place near Père Lachaise, in the 20th arrondissement, and I have a panoramic view over Paris. I can see the Eiffel Tower and Montmartre! It’s beautiful. chatelet.com

The grooming staple I am never without is my bottle of Terre d’Hermès. I’ve worn it since I was a teenager. I bought my first bottle with my pocket money when I was 13 or 14. £89 for 100ml EDT 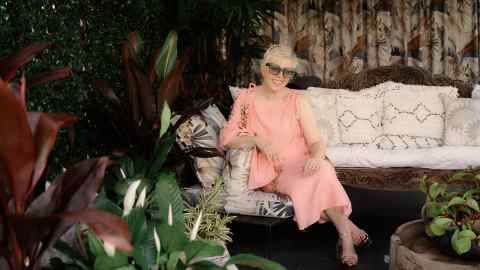 My favourite building is the French Communist Party headquarters in Paris, designed by the Brazilian architect Oscar Niemeyer. I made a video there, Jalousie, with the singer Angèle. I imagined every shot, every sequence, from the choreography to the styling. The design of the building is fabulous – period but futuristic at the same time. I also love the colour green and I’m obsessed with the green carpet under the dome. espace-niemeyer.fr

I have two favourite apps, the first is the Radiooooo app, where you can listen to music from all over the world and from any decade after 1900. I like to discover lots of different songs I didn’t know about before – for example, Nigerian music from the 1940s. And my second is Uber Eats. I love cooking but I never have time, so I usually order Vietnamese from Paris Hanoi near my apartment. I can’t eat anything too greasy, because the next day in rehearsal it sticks in my stomach and I can’t dance. radiooooo.com

The work of art that changed my life doesn’t exist. For me, it’s the human connections that have changed my life. [Hip-hop dancer] Thony Maskot taught me a lot about dance. And then my friend Marion introduced me to Christine and The Queens, which was my first proper job.

The best book I’ve read in the past year is an art book about Valentine Schlegel, the French sculptor and ceramicist. I don’t read novels – I have ADHD, and I can’t manage with my concentration – but I read lots of art books. Schlegel worked with white, soothing curves; what I love about her work is that it’s minimalist but it’s also very soft and warm. I was inspired by her for my set design, and I wanted to work with her on a project with Lacoste, but then my assistant tried to contact her and we realised she was no longer alive! So we ended up working with a friend of mine, the French artist Garance Vallée, who takes a lot of inspiration from Brancusi.

Some of my best ideas come from letting go. I’m very anxious, so it happens very rarely. And suddenly, when I am very emotionally charged and I let go – it really works. Whether it’s a little video on Instagram or a big project, that’s what gives me inspiration.