Brazil’s Oiapoque: a bridge too far

Built to stimulate trade, the long-delayed link to French territory stands near-idle, a symbol of ill-disciplined spending on infrastructure projects

A bridge from Brazil to France? The idea sounds like the fantasy of one of Europe’s more madly grandiose monarchs of old — a bridge to connect Europe and America: another continent just steps away.

And yet a great concrete bridge emerging above the Amazon jungle to span the Oiapoque river does just that: on the one side, Brazil; on the other, France. The Oiapoque bridge links the northern Brazilian state of Amapá to Saint-Georges-de-l’Oyapock in French Guiana, an overseas territory of France. Here, French is spoken and the euro accepted — you are, after all, in France, as the French border and customs officers greeting those crossing from Brazil make plain.

When the 378m-long bridge was completed in 2011 at a cost of R$61m (then about $50m), it held out the promise of prosperity for the 25,000 people of Oiapoque, a town where fishermen live under rusted corrugated roofs on the Brazilian banks of the river. But that promise has never come close to fruition: the bridge finally opened in March this year, and then only “partially”.

A series of long delays and disputes has continued to scupper what Brazilian and French leaders once envisaged as a pathway between the EU and Mercosur, the South American free-trade zone. One reason for the stalemate is vehicle insurance for drivers entering from Brazil: France is demanding levels of cover that are closer to those of the mother country. There has been anger about the lack of paved road on more than 100km of the 690km road from Oiapoque to Macapá, the Amapá state capital. Some works on Brazilian customs points languish unfinished.

The bridge “is the perfect example of a white elephant”, says Fabrício dos Santos, a young but senior lawyer at the ramshackle city hall of Oiapoque. “Ever since I was a child I’ve been hearing about the bridge — it’s become this dream that never materialises.”

Brazil is Latin America’s largest country but spends just 2.5 per cent of its GDP on infrastructure — less than one-third of what China spends and half of India’s spending, according to a 2016 report by McKinsey, the consultants. The report notes that Brazil is littered with white elephant projects, from Oiapoque to Chuí, on its northernmost and southernmost borders. They include 2014 World Cup stadiums, now barely used; the 1,700km Transnordestina railway, still incomplete after 10 years under construction; Petrobras’s Abreu e Lima oil refinery, mired in a huge money-laundering investigation; and the idle cable-car built to cross Complexo do Alemão, a favela in Rio de Janeiro.

The Romans had a goal when they built bridges. What is the purpose of this bridge? None

“This was a project between Paris and Brasília, without involving the locals,” grumbles a French official in Saint-Georges-de-l’Oyapock. A French flag flutters as he points to the other side of the steamy river. “They have put €24m into the bridge, while the people in Oiapoque still don’t have a sewage system.”

With the election this year of Emmanuel Macron, the saga is now into its fourth French president. Under a portrait of Macron, Eric Infante, French Guiana’s sub-prefect, says: “We have all the willingness to open it, all the willingness for the Brazilians to come here . . ” His voice trails off.

Brazilians currently need a visa to enter French Guiana and drivers require a 30-day, €175 car insurance policy to travel into the territory — a prohibitive cost for many locals on the Brazilian side. For Myriam Aflalo, head of French Guiana’s co-operation department, the problems arise from the fact that the project “was an issue of political will between presidents, without the technical work on its viability”.

Franco-Brazilian transport and insurance commissions are due to meet this year in Cayenne, and then in either Paris or Brasília in 2018, to try to solve the impasse. If that fails, some hope the EU and Mercosur will step in to overcome 18 years of dispute and agree a trade deal, which could lead to the bridge’s full opening.

As the Brazilian government embarks on a $45bn infrastructure plan in the wake of the country’s worst ever recession and a sprawling corruption investigation, Maria Orlanda Marques, mayor of Oiapoque, says the bridge should serve as a warning to Brazil to put aside poorly planned and overseen pet projects.

“The bridge could only be inaugurated after the road from Cayenne to Saint-Georges and from Oiapoque to Macapá is completed,” she says. “Cayenne finished [the work] swiftly, but here we have years of waiting. In Cayenne the road is divine, point-to-point asphalt. And here, well, here it is Brazil. It is what we have inherited from Brasília.”

Brazil, once the poster child of emerging economies, has bitter cause to lament the squandering of the gains from the commodities boom of the past decade. The country became a powerhouse but a wanton spendthrift. Now President Michel Temer is vowing to rein in its runaway spending.

Marques says the binational bridge was essentially a good idea, but now that all budgets are under the cosh, money still being thrown at the project could more usefully be used for cash-strapped local universities. “Certainly, that is my greatest sadness,” she says.

The border bridge exemplifies how Brazil struggles to handle infrastructure ventures. The two countries agreed to split the construction costs: Brazil would build the bridge and France would reimburse it for its half against receipts. “Brazil only sent the last receipts in December,” frowns Aflalo. That was more than five years after construction ended.

“This is part of the improvisation that many times has determined decisions in Brazil; I’d say most of the time,” explains Luiz Afonso Senna, professor of transport economics at the Federal University of Rio Grande do Sul and former chief of Brazil’s National Agency for Land Transportation. “There is lack of planning, structure and vision.”

The bridge was trumpeted as a boost to trade, fostering economic development in Amapá’s backwaters. Six years after completion, the bridge is open only to tourists. Brazilian businessman Ronilson Lima, who owns a riverbank restaurant on the Brazilian side and used to work on the French side, echoes Senna’s view: “The Romans had a goal when they built bridges. Here, now, what is the purpose of this bridge? None.”

French officials maintain the bridge will indeed one day spur development — but only in the decades to come. Meanwhile, locals like Lima have grown impatient. “The bridge is unnecessary,” he says. As he speaks, eight French customs officers take lunch at his restaurant; the bridge is closed at lunchtime.

Back at the bridge, bored Brazilian customs officers sit in the shade of the unfinished customs and immigration area, using matchsticks to tot up the number of vehicles that have crossed that day. “Two Brazilian motorcycles, a bunch of French cars,” one says. Over on their counterparts’ side, a French border policewoman jokes: “It’s not exactly Paris.”

Only private tourist vehicles are allowed to use the bridge, for now. Aflalo says the daily average is between 30 and 50, and that “99.9 per cent of them are French”. But, as Marques, mayor of Oiapoque, points out: “We have no structure to welcome tourism. Our roads have no lights, no signs, nothing. When tourists arrive, they don’t know what they are up against.”

Everyone else who wants or needs to cross carries on doing so by boat. Marcos de Barros Lisboa, a respected economist and president of Insper, a business school in São Paulo, estimates the cost of Brazil’s idle or inefficient infrastructure stretches into the “hundreds of billions” of Brazilian reals. He warns that investors will be wary of putting money into completing projects that are unlikely ever to offer a return on investment.

For Fabiano Pompermayer, an infrastructure specialist at government-led think-tank Ipea, says proper intervention and oversight are key. “The way to avoid white elephants is more government planning and as many concessions [to attract private investment] as possible, [so] the service that the infrastructure work will produce will repay the investment needed to build that infrastructure,” he says.

With budget deficits running at about 10 per cent of GDP, Temer has succeeded in passing a constitutional amendment that caps real spending increases by the federal government at zero, for up to 20 years.

This may be a blessing in disguise, says Pompermayer. The fiscal crisis could mean the end of fund-draining white elephant projects, “because the government does not have any more money to directly build public works”.

This enforced brake on public works may also curb the political patronage that has plagued so many infrastructure schemes. Further, the vast Lava Jato, or “Car Wash”, corruption probe may also scare off opportunistic rent-seekers.

During Chirac’s 1997 Brazil visit, the optimistic French president predicted that by the end of 2000 it would be possible to travel from Venezuela to Buenos Aires by road “without difficulty”.

Such optimism was doomed, according to Marques, and the numerous wasteful, and wasted, works that scar Brazil’s wild vastness signal why.

Get alerts on Brazilian economy when a new story is published

Explore the Special Report
READ MOREBrazil: the Road Ahead
A front-seat dispatch from a grain truck on Brazil’s notorious BR-163 highway 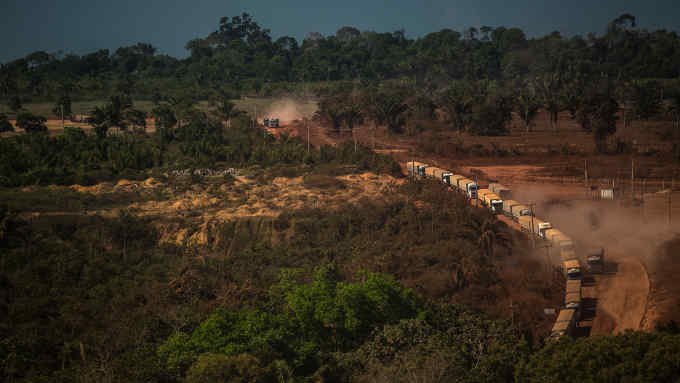 The World Economic Forum ranks Brazil 72nd out of 138 economies for the quality of its infrastructure, ahead of neighbouring Argentina but well behind Mexico at 57th. Now, Latin America’s largest country has a chance to put that right before the next peak in the economy