Boeing criticised for not acting faster on 737 Max concerns

Andrew Hill in London and Patti Waldmeir in Chicago

Until the very last moment, Boeing continued to insist that its 737 Max aircraft were safe to fly — even after the planes were grounded by every aviation regulator around the world bar the US Federal Aviation Administration. Then the FAA grounded them, too.

The safety issue will eventually be decided by aviation investigators based on hard facts. But investors who have knocked almost 11 per cent off Boeing’s market value are asking whether that will be too late to avoid irreparable damage to the company’s reputation. Will the two fatal crashes of Boeing aircraft in Ethiopia and Indonesia go down as one of those watershed moments when a large corporation made critical errors of judgment on crisis management?

Experts on crisis management in other areas of consumer product safety say Boeing should have tried harder to address the fears and frustrations of passengers, who took to airline Twitter feeds around the world to air their concern about the 737 Max.

Rupert Younger, director of the Oxford University Centre for Corporate Reputation, said Boeing should have acted faster to recommend grounding of the aircraft, echoing best practice over product recalls in other industries, such as carmaking.

“Irrespective of whether it’s their fault, in cases like this it’s almost always the case that organisations that immediately show humanity and empathy and put safety first perform better than those that don’t,” said Mr Younger.

Perceptions of a company can change, he said, but there is a distinction between how members of the public rate a company’s products and services versus how they rate its ethical character.

News in Focus podcast9 min listen
Why was Boeing slow to act on 737 Max concerns?

Corporate capability — based in this case on the safety record of Boeing aircraft — is traditionally quite stable, while character is more volatile, Mr Younger explained. He pointed to how Volkswagen’s character had been stained by the “Dieselgate” emissions test scandal, while customer confidence in its capability to build reliable vehicles sustained sales.

“The character issue is something [Boeing] can deal with more quickly; the capability issue is a much bigger threat to them,” he said.

Guy Corbet, an independent communications consultant, said: “From a reputational point of view, [Boeing] would have done better to get out ahead and put in some sort of firebreak.”

Chris Clearfield, founder of risk management adviser System Logic and co-author of Meltdown, a book about the handling of complex catastrophes, added: “It’s a classic failure of very sophisticated engineers to respond to the engineering question and not to the human question.”

Boeing did not respond to a request for comment on these issues. In a statement after the FAA decision, it said it was “supporting this proactive step out of an abundance of caution. Safety is a core value at Boeing for as long as we have been building airplanes; and it always will be.”

One of the first and best-known cases of a successful product recall was Johnson & Johnson’s withdrawal of its pain relief product Tylenol from the shelves in 1982 after a spate of deaths from poisoned capsules. The company pursued a forthright media campaign to explain its action and later restocked the product, in tamper-proof packaging. Its reputation recovered and was even enhanced by the way it handled the crisis.

Accusations of a lack of transparency were levelled at Rolls-Royce after one of its engines on a Qantas A380 exploded in 2010, prompting an emergency landing. The report into that incident identified serious failures in the UK company’s culture and manufacturing, with Rolls-Royce criticised for not being more open and communicative in the immediate aftermath of the incident. 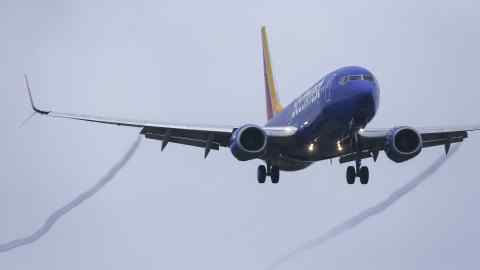 However, aviation experts were more cautious about suggesting that Boeing should have called for the immediate grounding of the 737 Max.

Jan Hagen, a professor at ESMT Berlin business school and author of a book on how the aviation industry deals with errors, pointed out that it is very easy after an air crash to leap to conclusions about causes, based on little information.

Without data to confirm that there was a problem with the aircraft, “it’s understandable that [Boeing has] been very cautious, because shareholders would jump on them if there were no reason to ground the planes”, Mr Hagen said.

John Hansman, director of MIT’s International Center for Air Transportation, said: “Most people don’t even know what airplane they are getting on. Historically even in cases where you had real airworthiness problems, the general public’s awareness of airworthiness issues has a lifespan of about three months. I don’t see this as being a long-term issue.”