Warning Britain will have to accept losing decision-making rights

Jim Brunsden in Brussels and Tobias Buck in Berlin

The EU’s chief Brexit negotiator has pledged to build a “close partnership” with Britain on foreign and security policy after Brexit, even as he warned that the UK would have to accept losing decision-making rights and other privileges that it enjoyed as a member.

Michel Barnier told an audience in Brussels that there “should be no uncertainty about our commitment” to security co-operation, echoing calls from Theresa May for the fight against terrorism, cyber attacks and other threats to be a fundamental part of the two sides’ future relationship.

But he stopped short of embracing proposals made by the UK this month for a detailed treaty that would seek to preserve many existing forms of operational co-operation between the EU and UK, saying that Britain’s exit from EU institutions and agencies meant that “it cannot be business as usual”.

Mr Barnier said that proposals published by the UK government this month on “internal security” issues, such as justice co-operation, read like a document from a country “that just begins the process” to join the EU, rather than leave it.

He added that the plans, which include continued use of instruments such as the European Arrest Warrant, and close links to Europol and other EU crime fighting agencies, even touch on areas where the UK was wary of involvement during its time as an EU member.

Mr Barnier’s comments are the latest sign of how the EU is trying to balance its firm desire for continued security co-operation with its concerns about setting any precedent that a country can leave while picking and choosing EU bodies and initiatives it wants to remain part of.

Britain and Brussels are already at loggerheads over whether UK companies can compete for contracts to roll out the EU’s €10bn satellite navigation project, known as Galileo, with resistance in the European Commission to continued British involvement. Brussels has argued that it cannot share the security-relevant proprietary information that underpins the project with non-EU countries — a stance Mr Barnier reiterated on Monday.

While insisting that the UK would be shut out of EU decision-making processes, Mr Barnier set out “five dimensions” of potential foreign and security policy co-operation, including “close and regular consultations” on sanctions and other key decisions, UK military involvement in EU-led operations and an agreement on the exchanging of classified information.

The FT ViewSpace industry
In a space race, Europe is better off with the UK 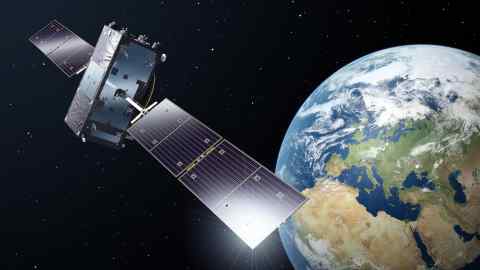 Mr Barnier’s comments came on the same day that the director-general of MI5, Andrew Parker, made a rare public intervention stressing the importance of EU-UK security co-operation after Brexit.

Mr Parker told an audience of security chiefs in Berlin that the threat posed by Islamist terrorism and Russia meant that “we must not risk the loss of mutual capability or weakening of collective effort across Europe”.

Others in the security community have stressed that, in reality, the nature of the common threat means that EU-UK co-operation will inevitably remain close.

Hans-Georg Maaßen, the head of the German domestic intelligence service, said on Monday that he had “no concerns” over post-Brexit co-operation.

Speaking at a press conference with Mr Parker, Mr Maassen added: “What is positive is that intelligence co-operation between German and European security services takes place outside the EU. That means that the level we have reached now in terms of close and trusting co-operation will continue independently of Brexit.”

Video: Listen: Britain and EU fall out over Galileo