Colombian financial entrepreneur David Vélez never found it much fun to visit a bank in Brazil.

When he was first posted to São Paulo in 2012, he found himself stuck in the bulletproof transparent rotating doors that banks use to screen customers for weapons on the way in.

It was after this experience that the Stanford-educated Vélez, then an executive at California-based venture capital group Sequoia Capital, hit on the idea of launching financial technology company Nubank in a country with one of the world’s most bureaucratic banking sectors, and one concentrated in a small number of institutions.

“I remember getting locked in those bulletproof doors a couple of times because I had my cell phone in my pocket and had guards looking suspiciously at me with guns,” he says about what is a regular occurrence for those who fail to fully empty their pockets before entering a Brazilian bank.

“People were paying 450 per cent in annual percentage rates of interest to get such a horrible customer experience,” Vélez says from Nubank’s office in a leafy area of São Paulo.

In 2013 and with seed capital of $2m, the Medellín-born Vélez started Nubank with Edward Wible, who is now the chief technology officer, and Cristina Junqueira, Vélez’s Brazilian business partner and a former executive at São Paulo-based bank Itaú.

“Nubank was born with the purpose of fighting the bureaucracy and complexity of the financial system, reinventing what banking means for Brazilians,” says Junqueira. With more than 20m customers, Nubank is now one of the world’s largest digital banks.

Our culture makes us hungrier to challenge the status quo

Nubank offers credit cards, personal loans and savings accounts by smartphone without the need for physical documents or branch visits, at more competitive rates than traditional banks and with zero fees. The company has so far raised $820m in seven funding rounds, including from Chinese tech giant Tencent. Nubank was last year estimated to be worth more than $10bn, making it the most valuable digital bank start-up globally, according to tech research company CB Insights.

“It was a very high-risk opportunity, but we had a lot of confidence in the team and we were attracted to the potential of the market,” says Nicolás Szekasy, co-founder and managing partner of Buenos Aires-based Kaszek Ventures, which alongside Sequoia contributed to Nubank’s initial seed investment.

Szekasy’s early bet paid off as the rise of Nubank — which also has an engineering hub in Germany — has spurred investor interest in the potential for disruptive financial technology start-ups in Latin America’s largest economy.

Last year, Brazilian fintech companies raised some $18bn in funding, according to Roberto Campos Neto, president of the country’s central bank. Compared with other emerging markets in Latin America, Brazil is in first place, he says. In the last three months of 2019, the central bank approved 13 new fintechs, with another 20 waiting in the wings.

That is no small feat in a country where the banking system remains concentrated into five big banks: three listed groups, Itaú Unibanco, Banco Santander and Bradesco, plus state-controlled Banco do Brasil and Caixa Econômica Federal. While most analysts do not see the fintechs toppling the big banks, the latter are scaling down their brick-and-mortar operations as technology advances. Itaú, for example, shut more than 370 branches last year because of an “increase in digitalisation” as customers look for alternative channels, the bank’s chief executive, Cándido Bracher, has said.

“There are people who exaggerate, saying that the [traditional] banks will end,” says Carolina da Costa, founder of the Center for Leadership and Innovation at Insper business school in São Paulo. “They will undergo transformations, they will have a greater demand for the use of technology to become more efficient and they will have to rethink their branches model. And I see the customers having more than one bank.”

Velez recalls that as competition from Nubank threatened the fat margins of the traditional banks, some at first did not allow customers to auto-pay their Nubank credit card bills from their bank accounts. “These days, they are cutting costs because they have to lower or cancel fees. So we are forcing these banks to shake up. They have changed the way they talk to their clients. They have got better — we like that — it is excellent to see that change in the incumbents,” says Vélez.

Bradesco and Banco do Brasil have since launched their own online credit card, Digio, in 2016. Itaú and Bradesco have also started their own fintech accelerators to nurture fintechs and benefit from their innovation.

Nubank’s attempts to shake up the banking sector extend to the look of its headquarters. Devoid of the expensive art usually found on the walls of traditional banks, the building has more of a university campus feel. Graffiti-style works adorn the walls, employees wear jeans and trainers, and buy lunch from a food truck parked outside. Business outfits for women and ties for men are nowhere to be seen. “This culture is our most significant competitive advantage,” says Vélez. “It also makes us hungrier to challenge the status quo. Nubank is based on four pillars: technology, design, user experience and data science. The combination of these enables us to grow.”

Nubank has placed the smartphone, whose penetration has grown in Brazil to roughly half of all mobiles sold, at the centre of its strategy, according to Statista, the German data provider, up from about a third in 2014 when Nubank was in its infancy. New customers apply for a card through their mobiles, with Nubank checking creditworthiness online using its own algorithms. Nubank charges no fees — it estimates this has saved $1.5bn in fees clients would have otherwise paid to traditional banks — and its consumer rates for credit cards, at 2.75-11.1 per cent a month, are well below the Brazilian average reported by the central bank, of 14.6-26.5 per cent a month.

Giovanna Castro, a 24-year-old who works in advertising, was among Nubank’s first clients. “I had an account at Bradesco and I hated it, because there was too much bureaucracy. I had to go to [a branch] every time I had a problem and there was always a huge queue,” she says. “I was an intern and had no money to pay the bank fees.”

The Brazilian unbanked are a huge opportunity for fintechs

While millennials such as Castro were Nubank’s original target clientele, these days about 10 per cent of its customers earn less than the minimum wage and another 7 per cent are over 60 years old. This has become a financial revolution in Brazil, a country of 210m people where the potential for growth is massive but where 45m adults are still outside the banking system, according to Brazilian consultancy Locomotiva.

“The Brazilian unbanked represent a huge opportunity for fintechs,” says Insper’s da Costa. “These are people who do not have a bank account and who need access to credit and means of payment. And they are customers that traditional banks do not absorb because they do not pass their more complex credit checks. So, I see fintechs playing a very important role in this sector.”

There are similar opportunities in other parts of Latin America. Nubank is venturing into Mexico, whose banking sector is dominated by foreign-owned groups such as Citibanamex, BBVA Bancomer and Santander, and has not had a new retail bank since Walmart of the US opened up there a dozen years ago.

Nubank has also made forays into financially troubled Argentina, which is wrestling with stubbornly high inflation and a deep recession. “We are a Latin American company that wants to free the banking industry for Latin Americans. There are 250m unbanked in Latin America, and we have a long-term vision,” says Vélez. 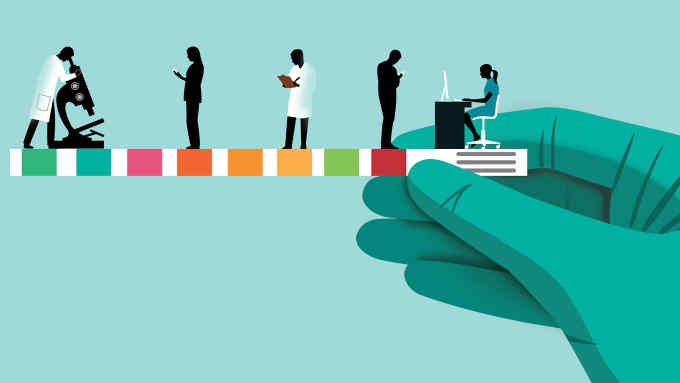