Hedge funds bet on further gains for the dollar

We’ll send you a myFT Daily Digest email rounding up the latest US Dollar news every morning.

Hedge funds are betting that the dollar still has further to rise after big gains this year, propelled by the US Federal Reserve’s determination to curb inflation with tighter monetary policy.

Hedge funds are running more wagers on the greenback advancing against the Canadian dollar, Japanese yen and euro than they are on it falling, according to data from the US Commodity Futures Trading Commission. Brevan Howard, one of the world’s biggest macro funds, is among the firms that have been betting on dollar strength, according to a recent investor letter.

Such trades come even as the US currency has climbed 18 per cent against a basket of six peers already this year, putting it on course for its biggest annual gain on record on the back of rising interest rates and a darkening economic outlook.

The Fed has raised borrowing costs by an extra-large 0.75 percentage points at each of its past three meetings, and signalled more aggressive action to come as it battles annual consumer price growth above 8 per cent. By comparison, the Bank of England and European Central Bank have been less vigorous in their tightening activity, while the Bank of Japan has drifted away entirely from the global trend by keeping rates in negative territory.

Higher interest rates typically draw in foreign capital as investors seek out better returns. At the same time, the greenback has also benefited in recent months from its traditional status as a haven asset during bouts of market stress. The US currency has hit a succession of 20-year highs, and the three months to September marked its largest quarterly gain since 2016.

Still, a number of hedge fund managers believe the dollar has further to soar, and are reluctant to sell out of the trade until there are clear signs that the Fed is ready to take its foot off the tightening pedal.

“I think there are further legs in the strong dollar trade,” said a senior executive at one major US hedge fund that has been profiting from bets on the dollar rising against peers, including sterling. The executive added that the trade was likely to continue to be profitable until the Fed signalled that it had tightened policy enough to tame inflation.

Much of the bullish positioning stems from computer-driven hedge funds trying to latch on to market trends. Such funds, which manage $360bn in assets, according to research house HFR, use complex algorithms to try to spot patterns in financial markets and have already been big winners from the dollar this year.

Bets on the dollar accounted for three of the six biggest winning positions late last month at Progressive Capital Partners’ Tulip Trend fund, according to an investor update.

And London-based Aspect Capital, which manages about $9bn in assets, is still long the dollar against the yen and euro, according to a letter to investors seen by the Financial Times, and also against sterling and other currencies, the firm’s director of investment solutions Razvan Remsing said. Its Diversified fund is up around 44 per cent this year, according to the letter. Currencies have been one of its most profitable asset classes in recent weeks.

The broader quant industry is still betting on the dollar rising against the yen, euro, sterling and other major currencies, according to Société Générale’s Trend Indicator, which models these vehicles’ positions.

Even after taking some profits, macro hedge fund traders were still long the dollar against currencies including sterling, the euro and Chinese renminbi, he said.

Ruchir Sharma
Biden should act now on the wrecking-ball dollar 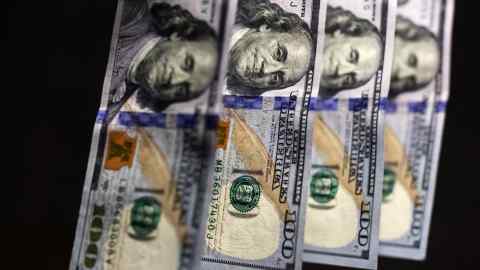 The war in Ukraine and fears of a major economic slowdown have bolstered the greenback even further, persuading investors to ditch emerging market and European assets in favour of dollar-denominated trades, seen as a safer home for their cash.

But despite the strength of the dollar wiping billions off US corporate earnings and helping drive up inflation in other countries, the Fed has repeatedly pushed back on speculation that it could pause its aggressive tightening. Markets are now pricing in expectations of a fourth consecutive rise of 0.75 percentage points in the federal funds rate next month.

Dollar strength would persist “until something breaks and the Fed has to ease off”, he said.