This all-American barbecue is a 68kg, four-wheeled temple to meat. Strictly speaking, the Traeger Ironwood 650 is not really a barbecue. You can barbecue with it, if your definition of barbecue is the application of radiant heat directly on to meat from a few centimetres’ distance – but Traeger’s speciality is wood-fired ovens for cooking meat of all kinds in a bath of delicious hot wood smoke. This means whole chickens, joints of beef, briskets, racks of ribs etc are now cookable in the great outdoors, with superb smoky taste effects. We also had a great success with creating some home-smoked salmon.

You load approved wood pellets into a big hopper on the side of the oven. They’re not too expensive and easily available in different flavours – cherry wood worked brilliantly for the salmon. The pellets are then slowly transported to the electric element (the grill needs mains electricity) by way of a kind of Archimedes screw called an auger.

It’s also WiFi-connected. So even if it’s raining, as it was both times we tested it, you can control the temperature, the ferocity of the cook and other parameters from a phone app from the safety of the great indoors. There’s an electronic probe to spike into cuts of meat that gives your phone or Apple Watch alerts if it’s getting too hot or not hot enough. You can then remotely adjust the heat and the smoke level from wherever you are. Traeger Ironwood 650, £1,499, traegergrills.com

Messing about with drones

China’s DJI is the Apple of drones – expensive, beautiful, superbly engineered and user-friendly. In 2013 DJI created the world’s first ready-to-fly drone that included an internal GPS system to help keep it stable – hence much easier to fly. Since then, it has tended to let competitors try new tech before releasing its own, honed and perfected version. So it is with FPV (first-person view) drones, which have onboard cameras that transmit the real-time view to you via VR-style goggles, so you can get the sense of being the pilot. There are plenty of decent FPV drones, but DJI’s first venture into this type is simply magnificent – easy and thrilling to fly, very hard to crash or lose, and incredibly responsive. 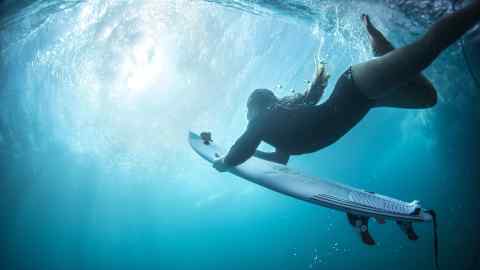 With a licence in hand (it’s essential you get this; there’s a test but it’s hard to fail) and obeying all the rules, I had a ball, taking off over a riverscape and semi-rural surroundings and scooting about at extraordinary speeds. The FPV can fly at up to 87mph with a theoretical flight ceiling of 6,000m, a height that would put you behind bars. But just bimbling about at 30mph, which seemed exceptionally fast, and staying under the legal 400ft, which is more fun than flying high, was truly like being a bird. DJI FPV, £1,249, dji.com

OK, I know. We need to spend less time attached to our devices and more time listening to the wind, the sea, the birds and all that. But I can’t ignore these Bluetooth-connected audio glasses from Austria because they are the first take on eyewear incorporating speakers and microphones in the spectacle arms that doesn’t look like something worn by the geekiest male character in a 1960s science fiction TV puppet show. Fauna Audio glasses are made for both men and women and look rather good. You can fit prescription lenses to them, tinted or clear, without invalidating the warranty, which is the issue with other brands. And they work really quite well for four hours of continuous audio and 20 hours’ standby between charges.

Nothing is inserted into your ears, which means you’re not isolated from the world. But the audio quality is modest at best. However, I think that’s a positive because they’re less immersive. You won’t be tempted to drown yourself in music, but for phone calls, podcasts or listening to the radio while you’re out and about, they’re perfect. And you’ll still hear the birds. Fauna Audio Glasses, €249, wearfauna.com

A new addition to a burgeoning market in esurfing, Fliteboard, is an electric hydrofoil that swoops you along while you’re seemingly floating 70cm above the water. This second-generation launch brings you a motor, propeller and wings beneath the water to power you to speeds of up to 34mph without the need for wind or waves. From a distance, efoiling appears almost like an optical illusion, or at least a skill for the supremely athletic and coordinated. But Fliteboard insists that, while you can scorch across the waves, you can also efoil so gently that a grandparent could do it. Tobias Lütke, the CEO/co-founder of Shopify, has described Fliteboard as “the most magical gadget on the planet” and I am not inclined to doubt him. Fliteboard 2, from €11,000, fliteboard.com

Smoothies are good for us, right? Particularly if we up the veg content. But they need a lot of power to make, which is why most blending gadgets run off the mains. Now the BlendJet, a portable, one-portion rechargeable blender from California, takes fruit and veg pulverising firmly off-grid. And what’s not to love? Perfect for camping, long walks involving a bit of foraging (nettle and wild garlic smoothie, anyone?), it’ll also be the focus of envy for those back in the office. You get around 15 blends per USB recharge and it comes in 16 colours, most of them appropriately fruity. Do bear in mind, though, that it’s a lightweight device and is less powerful than a mains machine, so if you decide to go wild with frozen strawberries you will defeat it. BlendJet 2, £36.95, blendjet.com