Just as London’s watch retail scene is experiencing the fruits of expansions and refurbishments planned in recent years, so New York’s jewellers are opening and reopening their stores throughout Manhattan to create a luxurious environment for customers. But while the weak British currency is buoying UK sales, the strong dollar — and previous electoral uncertainty — have been weighing on New York’s tourism and these outlets.

Consultants Bain & Co are predicting a slight fall in global luxury good sales to €249bn in 2016 and many jewellers are privately complaining about a slow year in terms of sales. Nevertheless, some observers are enthusiastic about the openings — planned as long as four years ago. “I’ve rarely seen this much activity in jewellery retail,” says Robert Burke, a New York-based retail consultant. “The economy has been less than stable but brands and stores are investing in long-term success.”

On Manhattan’s “luxury corridor”, which stretches up Fifth Avenue from 49th Street to 59th Street, Cartier recently celebrated the reopening of its US flagship store, now its largest boutique in the world, with an event during New York Fashion Week. Neighbouring Bulgari and Harry Winston are also among the luxury brands whose stores are undergoing extensive, lengthy and costly refits.

It took more than two years to complete the refurbishment of Cartier’s neo-Renaissance style mansion, originally acquired in 1917 in exchange for a string of pearls and $100. The jeweller has converted the store — once a user-unfriendly warren of different levels, sales floors and office space — into a cohesive, four-storey, 44,000 sq ft temple to luxury and heritage.

A few blocks away, one of Bulgari’s signature Serpenti snake-designs wraps itself around the hoarding of the Italian jeweller’s flagship on the corner of Fifth Avenue and 57th Street — prime real estate that is shared by Tiffany, Bergdorf Goodman and Van Cleef & Arpels. Daniel Paltridge, North American president of Bulgari, declined to share details about the refurbishment, which is scheduled for completion in the second half of 2017, except to say that it will bring “a slice of Rome to New York”. One block south, Harry Winston is is preparing to renovate its home of 56 years; it would not comment.

New York has the local wealth to justify these stores. It has the largest GDP of any metropolitan area in the US: more than $1.6tn, the Bureau of Economic Analysis reported last year. (Los Angeles was second, with $931bn.) More than 389,000 millionaires lived in the city in 2014, according to Spear’s magazine and WealthInsight, and it has the fourth highest percentage of millionaires per capita (at 4.6 per cent) behind Monaco, Zurich and Geneva. It also has 79 billionaires, with a combined wealth of $364.6 billion, a greater number than any other city in the world, according to Forbes.

It has plenty of tourists too. A record number — 58.3m — visited New York last year, according to NYC & Company, the city’s tourism marketing organisation. The most recent figures available show that in 2014, they spent $41bn, an increase from $38.8bn in 2013.

Taken together, this makes New York City a global hub for luxury spending. It accounted for more than 10 per cent of the global personal luxury goods market, according to Bain, in 2015. With €26bn in sales of watches, jewellery, bags and fashion, according to Bain, it was the top-performing city in the world. 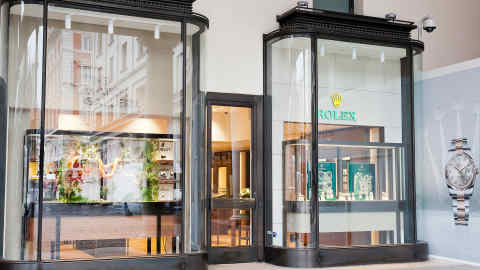 The outlook is not quite as rosy: Bain’s forecast of a fall to €25bn in 2016 is due to the closely-fought election, a slowdown in tourist spending and a shift by consumers towards spending on luxury experiences rather than goods. The Fifth Avenue luxury corridor was the most expensive for retail rent in Manhattan in spring 2016, with an average asking price of $3,358 per square foot, according to the Real Estate Board of New York. But this is down 8 per cent on spring 2015.

There are many other jewellers who have invested in their Manhattan offerings. Wempe, the German watch and jewellery retailer, fully reopened its doors in October on the corner of 55th Street after an $8m, two-year renovation. The family-owned business has more than doubled its retail space to 5,500 sq ft, introducing dedicated Rolex and Patek Philippe areas as well as a VIP room housing its offering of Buben & Zorweg watch winders and safes for dedicated collectors.

Ruediger Albers, president of Wempe US, says the expense of a Fifth Avenue lease is more than justified by the traffic such a location attracts. Wempe’s only US store is the top performer in its 32-branch network. “Thirty million people pass this building every year,” he says. “It’s the least expensive billboard in the world.”

Beyond the luxury corridor, brands are opening shops elsewhere in Manhattan. High-end department store groups are looking for new locations, to attract customers living in growing residential areas across the city and to reverse sagging fortunes elsewhere. Neiman Marcus reported that 2016 sales were down 2.9 per cent on the year before, with four straight quarterly declines. In August, Nordstrom reported its first quarterly revenue decline in seven years, and Saks Fifth Avenue’s most recent earnings reported a 1.3 per cent fall on the same quarter last year.

In the shadow of One World Trade Center, Saks recently opened its first downtown branch, one that mixes fine jewellery with fashion on the sales floor. A $250m overhaul of its Fifth Avenue flagship is also under way, including a new jewellery department called the Vault, which is scheduled to open in spring 2017.

Near Saks by Ground Zero, London Jewelers — a traditional watch and jewellery store — sits in the modern surroundings of Oculus, the recently opened shopping mall and transportation hub designed by Santiago Calatrava. Candy Udell, president of the company, says the Long Island family business was prompted to open its first Manhattan store to take advantage of the area’s burgeoning residential and retail development. “We wanted to be part of the wonderful, growing community here,” she says.

Jewellers who have been in the area for some time welcome the new shops. Blocks from the Oculus, Greenwich St Jewelers has been located on Manhattan’s southern tip for 40 years. Its toughest times came in the aftermath of the September 11 attacks on the World Trade Center, when its original premises had to close after suffering serious structural damage.

“It was like a ghost town in this neighbourhood. No one came down here for three years,” says Jennifer Gandia, who, with sister Christina Gandia Gambale, took over her parents’ business after they retired. Ms Gandia has seen the area change since then, initially thanks to the city subsidising business and residential development. Residents moved in first, luxury retailers followed. She does not feel threatened by the opening of Oculus and its neighbouring office and shopping complex Brookfield Place, home to Saks and brands such as Gucci and Omega. “We see them as an opportunity. Hopefully this will become a major shopping area,” she adds.

One retail expert, who declined to be named, is less sure: “There are a lot of visitors and commuters coming through the Oculus and Brookfield Place, but it remains to be seen whether there is a luxury customer at the high-end level there.”

New store Material Good, meanwhile, chose the heart of SoHo, an area not traditionally associated with selling watches and jewellery. The shop, which opened in September 2015, was created by Rob Ronen, former wholesale manager at Audemars Piguet, and diamond merchant Michael Herman, who spotted an opportunity to meet the needs of wealthy young consumers living downtown, who do not want to go uptown to shop.

While ecommerce, according to Bain, is the fastest-growing sector in luxury retail, bricks-and-mortar stores are realising they have a unique opportunity to create a memorable experience, a factor that is valued by the luxury consumer. “With the rise of online luxury sales, the client has become very focused on product and price,” says Mr Ronen.

Material Good has tried to create a different ambience from traditional, opulent Fifth Avenue stores. They have a first-floor, loft-apartment-style space with high ceilings, contemporary designer furniture and full kitchen. An Andreas Gursky photograph of a cityscape dominates one wall; a bank of watches lies along another in custom-designed, custom-lit vitrines.

Hosting regular private events and dinners, the store is designed to evoke what Mr Ronen describes as “unforced luxury”, an environment where clients can feel at home while they shop. As well as Audemars Piguet and Richard Mille timepieces, customers can peruse fashion, fine and custom-designed jewellery and a selection of Hermès handbags.

Those loyal to Fifth Avenue are not worried. Bulgari’s Daniel Paltridge says he is unconcerned about luxury retail expanding its horizons across Manhattan. “There are more than enough customers in the city, and it will be interesting to see how it evolves,” he says. One thing he does not doubt: “The Fifth Avenue corridor will remain the iconic location for watch and jewellery brands in New York.”

Get alerts on Bulgari SpA when a new story is published