Lead the way with 50% off
Automobiles

Lockdowns and jump in unemployment expected to cause further industry slump

Sign up to myFT Daily Digest to be the first to know about Automobiles news.

US car sales fell sharply in the first three months of 2020 as the coronavirus took a toll on demand, with job losses increasing and state governors ordering large swaths of the population to stay home.

General Motors and Fiat Chrysler both reported a sharp drop in first-quarter sales compared with a year earlier. US sales for GM slipped 7 per cent, while Fiat Chrysler fell 10.4 per cent. Analysts expect Ford to post a 16.1 per cent decrease when it releases sales data on April 2.

Both companies said that the sales decline was particularly dire in March, as more states and cities began ordering non-essential businesses to close and people to stay at home to help stop the virus from spreading.

“US vehicle sales for March are coming in every bit as bad as feared,” said Michelle Krebs, an automotive analyst. “April is expected to be even worse with dealerships and factories closed for the month, shelter-at-home orders expanding and unemployment skyrocketing to historic levels.”

State and local governments have issued orders covering more than three-quarters of the US population to stay at home. While dealerships in many states are designated as “essential” businesses, allowing them to remain open, most customers are steering clear. 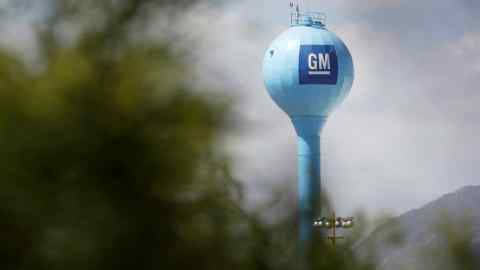 The companies also are facing production problems. GM, Fiat Chrysler and Ford have shut down their plants in North America to help curb the spread of the virus.

If the March sales rate were annualised, the industry would sell between 10m and 12m vehicles in the US in 2020, Ms Krebs said — after selling 17m in 2019. She estimated the car industry would sell “well below” 16m this year, or less than 14m in the “worst case”.

Fiat Chrysler reported 446,768 vehicles sold between January and March compared with 498,425 for the same period a year earlier. The company said the “strong momentum” of the first two months of the year was offset by declines in March. Retail sales comprised just over two-thirds of sales, while fleets made up the rest.

GM, the largest US carmaker, sold 618,335 vehicles in the first quarter. The company is trying to sell more vehicles online as customers stay home. Kurt McNeil, US vice-president for sales operations, said the company and dealer network were “offering concierge service, providing courtesy transportation to customers in need and offering home delivery where permissible”.