“A time bomb ready to explode” is how the World Bank describes the global rise of overweight and obesity, a burden it says has nearly tripled since 1975.

The condition has long been recognised as a key driver of type-2 diabetes, making healthier eating an important plank of any efforts to contain the disease.

A record 2m people in England alone are at risk of developing type-2, according to new NHS data — a conservative estimate given the country’s bulging waistlines.

The fight against childhood obesity is one of the key missions of The Guy’s and St Thomas’ Charity (GSTT), an urban health think-tank, social impact investor and one of the UK's largest and oldest charitable foundations. It has been based in the same area of south London for more than 500 years, giving it a unique long-term insight into the health problems of city dwellers.

Kieron Boyle, its chief executive, is a leader in using behavioural economics to effect social change. In 2010 he helped set up the UK government's “nudge unit”, since spun off as a private company operating worldwide as Behavioural Insights.

In its research and data-driven funding initiatives, GSTT focuses on the issues that disproportionately affect urban lives. “Cities shape our health in fascinating ways: postcode is just as important as genetic code,” says Mr Boyle.

Precisely how health and wealth intersect changes over time. According to Professor Edward Gregg, a public health specialist at Imperial College London, the relationship between diabetes and income has flipped. “Decades ago, diabetes was seen as a condition of affluence,” he says. Now UK five-year olds from the poorest income groups are twice as likely to be obese than those from the richest, and by age 11, they are three times more likely, according to a study in the European Journal of Public Health.

People living with multiple long-term conditions — a common problem for those with diabetes — is another area of focus for GSTT. “Where we work, of every five people who have diabetes, just one of them only has diabetes,” says Mr Boyle. “There’s no underlying biological reason for this and the patterns aren’t random — you can literally plot them on a map.” The data correspond to many of the factors associated with city life, such as high population, ethnic diversity and income inequality.

GSTT takes a very applied approach, says Mr Boyle. “We pull together lots of different types of data — statutory, NHS — but then ally that with commercial data: where people are shopping, where they’re buying things, Transport for London data, how and where people are moving to and from. And we do that to help us identify if a particular neighbourhood might be interesting to work with.”

Its interventions on obesity focus on diet rather exercise. Physical activity should be promoted “but no one can outrun a bad diet”.

These initiatives range from helping low-income families get vouchers for fresh fruit and vegetables to its “Better Everyday Takeaway” project.

This aims to offer healthy alternatives to standard takeaways on apps such as Just Eat, replacing meals with an average calorie content of 1,155 calories with a healthier 450-550. Following successful trials in Birmingham, the project is now operating in parts of south London.

A big problem for families in poorer areas is “over-employment”, where people work in multiple — often low-wage — jobs. “Lots of families are very clear what a healthy diet is, but time is a real issue. Batch cooking is quite a good way into that,” says Mr Boyle.

One thing common to poorer urban areas is the disproportionately high numbers of fast-food outlets and corner stores.

It is the latter that play a key role in driving childhood obesity, says Mr Boyle. “Almost nobody focuses on convenience stores, but actually that’s where a lot of families, and particularly those with lower incomes, are buying a lot of their food and this is where you get the frozen pizza that costs £3 and has thousands of calories.”

The charity’s “Healthy Returns” report, a collaboration with Big Society Capital and the Food Foundation think-tank, identifies a range of “challenger brands” that philanthropists and social investors can help bring to scale, such as Ugly Drinks, a flavoured sparkling water marketed at teenagers that is much healthier than larger soft drink brands.

GSTT is working on a £1.5m prototype investment fund that supports brands offering affordable and healthy products, with the aim of launching a multimillion-pound fund later this year.

There is a substantial market opportunity for investing in healthier food environments, the charity argues: families on less than £20,000 a year spend more than £6.5bn a year on food.

When was the last time you saw ‘buy one, get one free’ on carrots?

GSTT also works with ShareAction — a charity that promotes responsible investment — to influence food manufacturers and retailers via their shareholders.

Sugar-laden foods are a particular target. “We're engaging with institutional asset holders and pension funds, talking to them about the business risks and reputational regulatory risks of high sugar-content food,” says Mr Boyle. “There’s no silver-bullet solution to childhood obesity but if there’s one thing that would really help, it’s reducing the amount of sugar in cheap food.”

His organisation is also taking part in a series of “behavioural nudges” with big supermarkets across 230 stores to see if customers can be prodded towards healthier — and affordable — options. These include removing sugary cereals from children’s sightlines and price promotions on fruit and veg. “When was the last time you saw buy one, get one free on carrots?” Mr Boyle asks.

With the help of the University of Oxford, GSTT is examining till receipts from the stores to see whether people’s purchases have become healthier and — whether they affect store profitability. “The big issue has to be: is this sustainable?” asks Mr Boyle. Results of the trials will be published in June.

Above all, the charity wants to change the perception that childhood obesity stems from lack of willpower or bad parenting rather than the environment that children grow up in.

“Cities set our health paths at early ages, so we need to engage before it’s much too costly to do otherwise,” argues Mr Boyle. “That’s a big ask, but not impossible.” 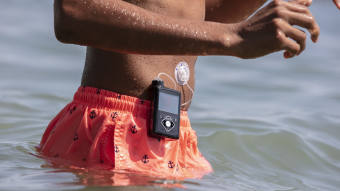