Where to eat to cure a hangover

A global guide to the best breakfasts, soup stations and spice stations to set you back on your feet

The furthest I’ve ever travelled for a hangover was a 90-minute taxi from north-east Los Angeles to République, a café near the La Brea Tar Pits. In part, the LA traffic was to blame for the length of the journey. But it was all about the potato pancake with creamy hollandaise and soft poached eggs. I needed a cure. The pancake was it.

That was a fairly luxe hangover – République has been nominated for numerous awards for its breakfasts, and queues often snake around the block. Had I been feeling more frugal, I might have gone to West Hollywood’s Breakfast by Salt’s Cure, an elevated diner with a build-your-own griddle cake. Likewise, if I’d been in Barcelona or Melbourne, I might have settled for Hardware Société’s croque madame. But wherever you are, a hangover should be an “anything goes” situation. When else is it acceptable to order a burger before midday?

Jesse Burgess of YouTube food duo TOPJAW is very much an anything-goes eater: recent videos include a tour of New York in 20 pizza slices and a guide to London’s best pubs. “I’ve travelled an embarrassingly long time for a date with The Convict,” he says, of the speciality at south-west London café Milk, a muffin stuffed with bacon, sausage, egg, hash brown and “hangover” sauce (smoked chipotle ketchup). “Its smiley team, who are likely to be as – if not more – hungover than you, will nurse you back to health in no time.” Another favourite is Parlour in Kensal Green. “If you don’t make it there for brunch, get a roast in you. Don’t fancy that? Have a Desperate Dan’s Cow Pie [beef, bone marrow, onions, mushrooms and a suet-pastry crust].”

According to psychology lecturers Sally Adams and Craig Gunn, the need for a fatty, carb-heavy breakfast is not unfounded: foods such as bacon, eggs and cheese are rich in the amino acid cysteine, which scientists claim can decrease levels of acetaldehyde, a toxic chemical produced when the body metabolises alcohol. This is most likely why I spend weekends pining for the sandwiches at New York cocktail bar Double Chicken Please, where tenderised chicken thighs are paired with Thai basil aïoli and house-made hot honey. (Co-founder GN Chan doesn’t regularly overdo it, but recommends nearby Madame Vo, Fish Cheeks and Raku as his favourite fixes.)

Others swear by salt, small amounts of which can help restore sodium and glycogen levels. The best way to do this is with ingredients such as soy sauce and miso – fermented seasonings long thought to support gut health. “I get straight to Yang’s Kitchen in Alhambra for its set meal that has grilled fish, rice, pickles, miso soup,” says LA-based writer and cook Julia Sherman (aka Salad For President). Similarly, in Jakarta, supper-club host Rahel Stephanie is pulled by the aromatic soup at Soto Mie Pak Kadir Gunung Sahari. “While there are numerous kinds of Soto dishes across different regions of Indonesia, this clear East Javanese version is most invigorating when hungover – always with a side of sambal,” she says.

Like Sherman and Stephanie, I tend to lean towards something restorative – be it a bowl of decadent noodles at Mayfair’s Park Chinois or the ferocious Tom Yam Mama at Speedboat Bar. Most recently I’ve been heading to the new Peckham branch of Luke Findlay’s Supa Ya Ramen, where sell-out dishes include cheeseburger mazesoba and Cumberland sausage Tantanmen, a spicy broth with sesame miso and a large, jammy egg.

“When we opened the first shop in Dalston it was typical for people to wait around an hour and half to eat,” says Findlay, who started the restaurant in his flat before launching officially in 2020. “The legendary Zain, who had a restaurant on the third floor of his clothes shop in Pakistan, has undoubtedly travelled the farthest. He invited me over to do a week-long residency to introduce ramen to the people of Lahore, and eventually came to London for a weekend to have a bowl.” 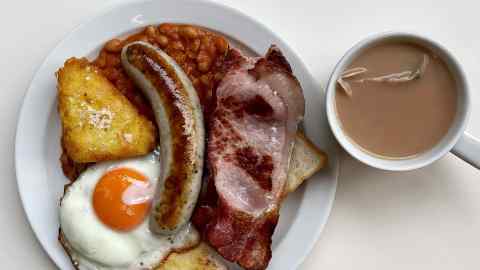 Ask anyone sensible and they’ll tell you that the best hangover cure is to prevent one in the first place. “Drink wines lower in alcohol,” says Dalston Wine Club founder Hannah Crosbie, who recommends Can Sumoi’s 11 per cent La Rosa (£22, shrinetothevine.co.uk). But, in worst case scenarios, Crosbie lugs herself to hallowed greasy spoon E Pellicci, on Bethnal Green Road, for a “fine classic set”. “I’ll need McDonald’s hash browns too,” she concludes. “It’s a well-known fact that grease absolves a multitude of sins.”