A London-wide police ban on protests by Extinction Rebellion climate activists last month was illegal, the High Court has ruled.

Superintendent Duncan McMillan had “no power to impose” a blanket ban on the group’s “October Rebellion”, Lord Justice Dingemans and Mr Justice Chamberlain said on Wednesday.

Extinction Rebellion’s two-week action involved thousands of activists blockading roads around the heart of the UK capital. It was designed to cause widespread disruption to roads, workers and the government.

The Metropolitan Police imposed the ban midway through the “rebellion” and declared that further demonstrations by the group anywhere in the city were an arrestable offence. But the judges said the police had been wrong to define all the Extinction Rebellion protests as a single “assembly”, taking place in a clearly defined public space, that could be banned.

During the protest, Extinction Rebellion demanded that politicians and the media “tell the truth” about the risks posed by climate change and called for greater action to prevent it, including that the UK government’s deadline for reaching net zero carbon emissions be brought forward from 2050 to 2025.

The Met’s order prompted an immediate backlash from protesters and freedom of speech campaigners. Politicians and campaigners, including Green party MP Caroline Lucas, launched a judicial review to challenge the decision, claiming the police had abused its power and the ban breached human rights. They asked for the ban to be lifted before the end of the protest, but a judge deemed the matter too complex to be decided in time.

“Extinction Rebellion is delighted with the court’s decision. It vindicates our belief that the police’s blanket ban on our protests was an unprecedented and unlawful infringement on the right to protest,” said Tobias Garnett, a lawyer in the group’s team.

Ms Lucas said the ruling was “brilliant news”. “Peaceful protest is a fundamental right in a democracy and must not be arbitrarily shut down,” she said. 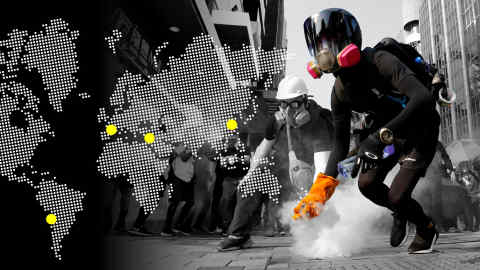 More than 1,800 people were arrested in London during the protests and hundreds more were detained in the 60 other cities around the world that joined the action. Many activists defied the London ban and continued to protest, several hundred of whom were arrested for failing to comply with the order. Those charges are now likely to be dropped, campaigners said. Extinction Rebellion added that those arrested might sue the Met for wrongful imprisonment.

After an initial hearing, and in order to accelerate a ruling, the seven claimants agreed to drop their argument that the ban breached the rights to freedom of expression and assembly, and argued instead that the police had been wrong to treat all Extinction Rebellion protests as a single assembly that could be banned across the entire city.

The Met said it was “disappointed” by the ruling and would “carefully consider the judgment before deciding on our next steps”.

The decision to impose the ban was taken “after much thought, and followed more than a week of serious disruption to London which required a significant police response in challenging circumstances”, it added. The Met said that policing the protests cost just over £24m, with thousands of officers working 12-hour shifts.

Get alerts on Extinction Rebellion when a new story is published