This week: SFO probe into its director’s conduct, plus TV interior escapism

Home working during lockdown has either meant minimal disruption or a highly stressful experience, depending on individual circumstances — and in the legal sector it has also exposed a divide between junior and senior lawyers.

Despite efforts from law firms to upgrade technology to improve home office spaces, the reality for many in junior roles has meant fighting flatmates for space in cramped kitchens, while also facing exam delays and missing the lack of face-to-face support from senior colleagues.

It is one of the many ways that Covid-19 has disrupted the legal sector, which the FT has been covering as part of our ‘Lawyers in a Crisis’ series.

This week the FT reports on investigations into the head of the UK’s Serious Fraud Office, who has been criticised by a judge for letting a freelance agent acting for potential suspects become involved in a probe into alleged corruption in the Iraqi oil industry.

What started with a complex bribery case into the Iraqi oil industry has turned into an investigation into the behaviour of the UK’s most senior anti-corruption prosecutor.

Lisa Osofsky, director of the Serious Fraud Office, has been criticised by a UK judge for engaging with “flattering” messages sent by a US private investigator seeking positive outcomes for his clients who were potential suspects in an SFO case.

The judge’s ruling on Ms Osofsky’s contact with Florida-based David Tinsley was made public for the first time on Monday as reporting restrictions were lifted on the convictions of two British businessmen convicted of a bribery plot in the Iraqi energy industry.

It made for uncomfortable reading. Ms Osofskfy “made herself vulnerable” to Mr Tinsley’s flattery, Judge Martin Beddoe said, and should not have been speaking to him, which she did against the wishes of her staff. Lawyers say the UK attorney-general should get involved.

I’m interested to hear what impact you think Brexit will have on the City of London and the UK legal market. Do you think we risk opening channels for flows of dirty money? Will the reputation of English law be dented? Or is it all a lot of hot air? Let me know @katebeioley_FT.

Lawyers, opposition politicians and campaign groups have criticised Suella Braverman, the UK attorney-general, for staying out of the SFO’s investigation into the conduct of its head, despite its role overseeing the agency.

“Charles Falconer, the shadow attorney-general and a former justice secretary, said the attorney-general should ‘get to the bottom of this’ and ‘appoint a judge or retired judge to prepare a report for her on the facts and the ramifications’.”

Former Barclays banker Roger Jenkins apologised for calling financier Amanda Staveley a “tart” in testimony in front of London’s High Court and said his then wife Diana had been “jealous” of press coverage of Ms Staveley’s role in a 2008 emergency fundraising.

“The trial has already heard that Mr Jenkins complained about Ms Staveley taking the limelight from his ex-wife over the fundraising. The bank contends that Sheikh Hamad — not Ms Staveley — introduced Abu Dhabi’s Sheikh Mansour as an investor in October 2008 and Qatar was paid £66m for the introduction.”

The $6bn judgment pitting Nigeria against a London court

Three years ago an obscure company founded by two Irish businessmen won an arbitration award from the west African state now worth a quarter of its foreign reserves, for an oil and gas project that never broke ground. We look at the corruption risk lurking in international arbitration, and a case with more twists and turns than a thriller.

“The UK capital in particular fosters confidentiality through rules in applicable law, which means the bulk of the arbitration court’s decisions never become public. Parties benefit from keeping their commercial or state secrets hidden, but a roster of cases have triggered questions about the extent to which they should remain confidential.”

We must maintain the UK as a world leader in law

Shadow secretary of state for justice David Lammy makes an impassioned call for support for lawyers to get them back to work during Covid-19. Legal services contribute around £60bn in gross value to the UK economy each year and support some 552,000 full-time employees — lawyers are not the “fat cats” some think they are, he says.

“After watching Harvey Specter in Suits or Miranda Hobbes in Sex and the City, you would be forgiven for putting lawyers near to the bottom of your priorities as Covid-19 rips through the world’s economies, leaving mass unemployment in its wake.”

The FT’s Miles Johnson exposes the chilling activities of an Italian Mafia group making riches from plundering the country’s public health system, including establishing monopolies on faulty ambulances, transporting blood, and even taking away the country’s dead.

“An investigation by the Financial Times has established how the trail of money from these crimes washed into the financial centres of London and Milan. Over the past five years, profits gained from the misery of patients in Calabrian hospitals were packaged up into debt instruments using the kind of financial engineering typically favoured by hedge funds and investment banks.”

For those of us sick of our own four walls, the FT’s Life and Arts section offers some respite in the form of TV interiors this week — a feast for the eyes as well as the mind. Take a tour through the sumptuous sets that make up the BBC’s feted Killing Eve and better understand the drama of Little Fires Everywhere through the characters’ differing styles.

“No setting is more revealing than characters’ homes. ‘All design should inform the viewer and complement the character,’ says Lucy van Lonkhuyzen, production designer for BBC drama Normal People, another lockdown hit with detailed interior set design. ‘Every item on set must give us a glimpse into the character’s personality before they say a word.’” 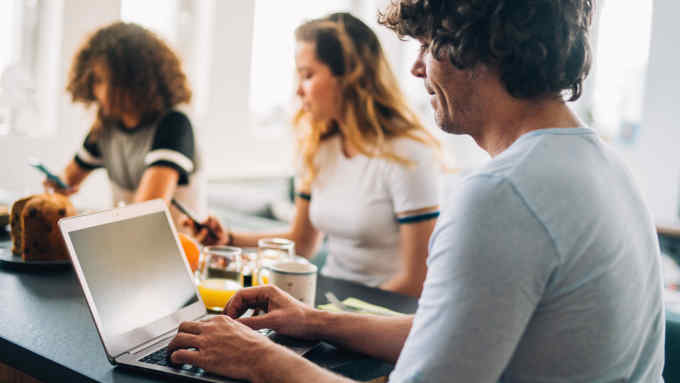