Harvard tops the list of the world’s most influential business schools based on teaching power — a new measure of how much their academics’ work is used on other business courses.

Other institutions with a faculty whose books on business, accounting, marketing and economics are widely recommended by their peers include Warwick and Portsmouth in the UK, the Sloan school of management at the Massachusetts Institute of Technology and Kellogg at Northwestern in Chicago.

The ranking, compiled for the Financial Times by Open Syllabus, a US non-profit organisation, tracks the extent to which the work of professors and their business schools is assigned to students. It provides a different measure to the citations received from researchers in academic journals.

“Universities do two things: teach and research,” says Joe Karaganis, director of Open Syllabus. “Research leaves a public record but teaching has been a black box. Faculty get credit for published work cited in journals. We hope we can help revalue teaching by helping them to claim credit for work they do with significance in the classroom.”

Karaganis says his project could encourage the wider sharing of courses and help students prepare for study. It could also provide greater credit to academics for their teaching at a time when the focus on performance is concentrated on research.

The “teaching power” ranking has been formulated by calculating the business publications with the most references in course descriptions and reading lists since 2015. These citations must be freely available online and credited to the business schools where the authors are based, retired from, or with which they have a long association.

The most frequently cited individual academic is Philip Kotler, professor emeritus of marketing at Kellogg School of Management at Northwestern University, whose books include Marketing, Marketing Management and Principles of Marketing.

Just 10 per cent of the most cited works are by women, led by Emma Bell from the Open University, for her Business Research Methods.

The business school with the largest number of cited academics overall is Harvard, whose faculty includes Michael Porter, a professor specialising in competitive strategy, and John Kotter, emeritus professor of leadership.

The ranking is dominated by textbooks, many of which were written years ago and reprinted many times. One example, which came out in 1989, is Organisational Behaviour in the Workplace by Laurie Mullins, a retired lecturer from Portsmouth university. Pearson, the publisher, says the book has been used by 500,000 students.

The “teaching power” ranking draws from 5m titles cited in more than 7m syllabuses in nearly 7,400 universities in 96 countries. It is dominated by US colleges followed by those in the UK and Canada.

Across all subjects taught in universities, William Strunk’s classic Elements of Style is in top position and Karl Marx’s The Manifesto of the Communist Party is fourth, ahead of Plato’s The Republic.

But the largest single number of syllabuses, nearly 600,000, are in business studies. Many of the syllabuses for business courses made available online are from institutions in the UK which cite works by other British academics. This helps to explain the high placings achieved by several UK schools. The analysis excludes institutions in countries where concern about political persecution could put teachers at risk.

Open Syllabus made its assessment based on four academic disciplines that it was able to categorise with a machine-learning algorithm. However, it could not easily distinguish the precise courses or level of study in which publications are cited, the size or status of the different classes or how widely the assigned books are actually read.

Points were awarded for the number of citations of each work divided between the number of authors who could be associated with a particular business school as their principal employer. The works must be on reading lists produced for courses since 2015 to provide a reasonable degree of “freshness”.

Get alerts on UK universities when a new story is published 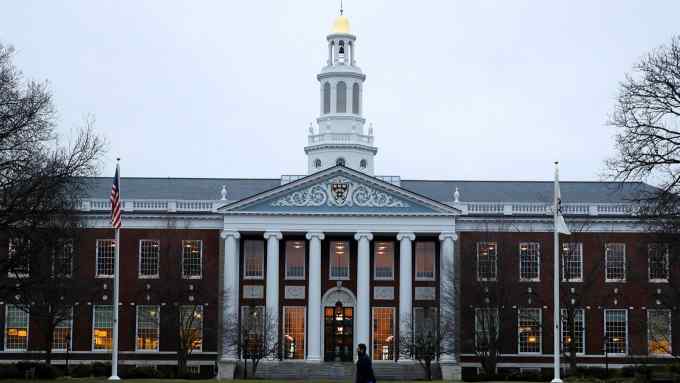