Why size matters at arts fairs

Bigger often proves better at art fairs, where large-scale works tend to emerge the most memorable. Expectations are therefore as high as the works at Meridians, Art Basel Miami Beach’s first section for large-scale art.

When the fair opens next week, 33 installations will be presented in the new Grand Ballroom of the Miami Beach Convention Center. Another Meridians work — “Los Límites de lo Posible” (2019), six sculptures by José Davila that were originally made for this year’s Havana Biennial ($475,000, with Sean Kelly gallery) — will stand outside the fair’s north entrance, on the newly created Collins Canal Park.

Organising this inaugural section of the fair is Magalí Arriola, an understated but highly respected Paris-born curator, who added another string to her bow since taking on the Meridians project when she was named director of Mexico’s Museo Tamayo in April. Her other recent roles include curating Mexico’s pavilion at this year’s Venice Biennale.

Arriola is unfazed by the commercial environment of a big-brand art fair — she has previously worked with the arteBA fair in Buenos Aires and at Arco in Madrid — though the scale of Meridians has proved a new challenge.

“It’s been interesting to think about how to present expansive works,” Arriola says. She plans to make the section as free of booths as possible — as well as “walkable, sort of like being outdoors while inside”, she tells me over Skype from Mexico City.

The Meridians section is “not tightly curated, but certain themes still emerge”, she adds. These include issues of race and identity, something Arriola describes as “in the air all the time at the moment”. She cites “Dance of Malaga” (2019), a film directed by the Chicago-based artist Theaster Gates, which revisits an island off the coast of Maine from which an African community was evicted in the early 20th century, as explored in Gates’s exhibition earlier this year at the Palais de Tokyo in Paris. The film is brought to Miami by Richard Gray, Regen Projects and White Cube galleries, and priced at $150,000.

Hanging opposite the Gates work, “Dynastie” (2012), a 20-metre long, frieze-like watercolour by the Cameroonian artist Barthélémy Toguo, depicts visions of war in Africa with images of weapons and torture ($150,000, Galerie Lelong).

Prouvost and Lamothe are two of only six female artists in the Meridians section. “Unfortunately, this time around, we didn’t receive that many applications from the galleries to represent projects by women. It wasn’t a curatorial decision,” Arriola says.

Perhaps surprisingly, for a section dedicated to ambitious, large-scale work, there will be plenty of painting on view. In the centre of the ballroom will be “Constructed Paintings” (1971-73), a four-part series by the self-taught US artist Allan McCollum ($575,000, Petzel gallery). A six-by-three metre painting by the late California painter Sam Francis will hang on the east side of the room (“Untitled”, 1980, $1.45m, Galerie Thomas). And a similarly monumental painting of a Mexican desert scene, “Fool’s Gold” (1982) by Alexis Smith, will also be on display ($250,000, Garth Greenan gallery).

Arriola highlights the strong “Americas” feel to the Meridians section, whose name alludes to the north-south lines on a map. More than two-thirds of the artists on show come from the US, Canada and South American countries including Mexico, Cuba and Brazil.

Their presence ties the section to the rest of the Miami fair, which has proved an important hub for Latin American and other American galleries on an international stage. “Art Basel has been a way to build bridges between countries in the Americas,” Arriola says. For large works, there is also a practical benefit to showing in Miami. “Shipping art has become very expensive, so an American gallery could struggle to show a work such as the Luciana Lamothe overseas,” she adds.

Perhaps surprisingly, for a section dedicated to large-scale work, there will be plenty of painting on view

Arriola has an unmistakable French accent — her mother’s family is from France and she studied art history in Paris — but she exudes the Americas, too. She grew up in Mexico and lived in Mexico City and Los Angeles with her previous partner, the Mexican conceptual artist Mario Garcia Torres. She has been back in Mexico City since 2009, when she took on her first role at the Museo Tamayo, as its chief curator, a position she held until 2011. She went on to work at the city’s private Museo Jumex until 2014.

She is, she says, very pleased to be back at the Tamayo Museum but keen to keep her new role separate from her work with Art Basel. “They are two different kinds of jobs, directing a museum and curating a fair, though they help each other, for sure. I’ve got to know lots of artists through the [Meridians] application process,” she says.

Her plans at the museum include growing its international reach — but for now she is focused on the fair. “It’s going to be intense. For months I’ve been looking at so many of these works on a computer screen and am really excited about seeing them in real life,” she says. 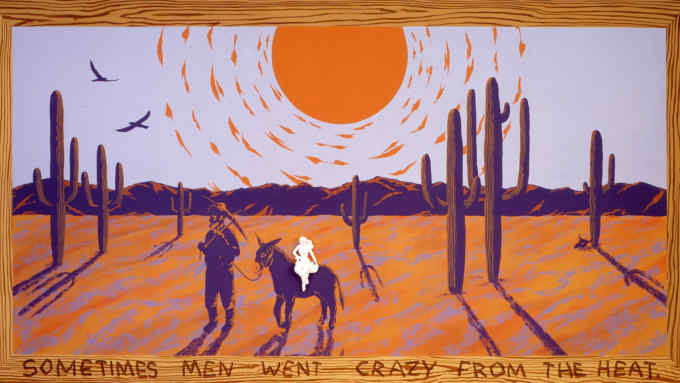