Lawyers who merge business, law and technology are redefining corporate legal departments. Plus: five general counsel who stand out for developing new products

In-house legal teams often find themselves cast in the role of unhelpful naysayers, out of line with the company’s strategy and its approach to risk. The “department of progress prevention”, is how one chief executive puts it. As it happens, that business leader salutes their company’s general counsel, but speaks for many other executives who assume the legal team’s starting point is to put on the brakes.

In addition, as more companies undergo digital transformation — a trend currently being boosted by the pandemic — lawyers are finding it harder to keep up.

Mark Tan at GLP, the Singapore-based international logistics company, is responsible for the IT department as well as running the legal team of 40 or so lawyers. “It sounds like the two areas are disparate,” he says. “But as we move into big data, it becomes essential to marry the two worlds of technology and law.”

It sounds like the two areas are disparate . . . But it is essential to marry the two worlds of technology and law

Mr Tan studied computer science and worked in software development before pursuing a legal career. Commercial colleagues describe him as a rare breed of lawyer who not only asks good questions, but helps GLP meet its strategic objectives and comes up with ideas.

A number of general counsel who are business leaders do have experience in technology. Brad Brubaker, general counsel at UiPath, the US robotic process automation business, studied physics and worked in systems engineering before turning to law.

John Zecca, general counsel at Nasdaq, leads a 215-strong team, half of whom are lawyers while the other half comprise different professionals, including data scientists, technologists and an aeronautical engineer. Nancy Laben, chief legal officer at Booz Allen Hamilton, started out as a tech lawyer for IBM. “We have to keep up with the pace of technology to be able to advise,” she says.

Being digitally savvy enables a general counsel to contribute competitive advantage, and change internal perceptions of legal from cost centre to revenue generator.

Mr Zecca’s team sells consulting services directly to Nasdaq’s customers, other stock exchanges, on how to draft their rules and conduct surveillance. He does admit that “it is hard for lawyers in-house to sell their services because of who they represent”. Nasdaq’s legal group does not have its own profit and loss account but consulting revenues are tracked.

I can see a collapsing of other functions into legal . . . I can see legal departments taking more control

Mr Brubaker’s legal team at UiPath also interacts directly with customers. Lawyers in the team have automated various processes such as contracting, using the company’s own platform, and are now sharing these products and knowhow with legal departments in other companies and big law firms. Seven legal automations (called bots by Mr Brubaker) are live and 15 more are in the pipeline.

The contracting bot is a particular point of pride for Mr Brubaker. It bridges the gaps in standard contracting processes and does so while working with existing systems. The legal team is already on to the next phase — dealing with non-standard contracts.

Unlike a number of market commentators who predict that corporate legal departments will shrink, Mr Brubaker sees a different and powerful future. “I can see a collapsing of [other] functions into legal,” he says. “For example, if you automate all the processes around procurement, soon you will be in a position where you do not need the procurement department. I can see legal departments taking more control.”

Five of the best general counsel for developing new products

After 25 years working for SAP, the German software company, Brad Brubaker was ready for a new challenge. He joined robotic process automation company UiPath in 2019 to lead a 38-strong legal team that has a sideline in product development. Its lawyers have developed tools or automation bots that streamline repetitive legal and business processes for UiPath and are now selling these to law firms and other corporate law departments. Mr Brubaker, who started his career as a systems engineer before becoming a lawyer, was brought in to ready the company for a potential initial public offering.

When the big accountancy firms began their foray into the legal sector in the mid-1990s, Nancy Laben was responsible for setting up the Asia-Pacific legal practices for Arthur Andersen and then Andersen Consulting, which became Accenture. A seasoned technology lawyer, who bypassed law firms to start her career at IBM, she has used her seven years at Booz Allen Hamilton to broaden the remit of the legal function to include corporate affairs. One project where the lawyers’ expertise in law and technology melds well is in helping to streamline US government vetting processes for security clearances.

Over the past five years, GLP, the Singaporean real estate and logistics business, went private, raised its assets under management from $11bn to $89bn and expanded into new markets including the US, India and Europe. As the real estate industry moves from selling products to services, GLP has developed new business models for warehouse clients. Instead of charging fixed costs for renting space, clients are charged on the flow of goods through GLP’s warehouses. Mr Tan’s unusual combination of roles, as both the head of legal and IT, means he has played a critical role in GLP’s rapid transformation.

Katherine Tew Darras leads a team that combines legal and technology expertise to help differentiate ISDA from other financial trade associations. Initiatives include a fallback solution should an interbank offered rate (Ibor) fall into disuse. The solution allows industry participants to change all their contracts that refer to Ibor. In addition, the legal team has developed an online global negotiating platform, ISDA Create, to reduce the time and cost of contractual negotiations. Chief executive officer Scott O’Malia describes Ms Tew Darras as combining deep market knowledge with the ability to “embrace change as if she came from a disruptive start-up”.

Promoted to overall general counsel in 2019, John Zecca has served nearly 20 years at Nasdaq, the financial services business, which operates several US and European stock exchanges. In that time, he has helped to develop various legal and technology innovations. They include a machine learning tool to process 46,000 Securities and Exchange Commission filings a year and Nasdaq’s surveillance technology, which is used to visualise trading patterns and detect market abuse. Alongside the lawyers, the 215-strong legal and regulatory function houses technologists and data scientists who are market experts and product developers. 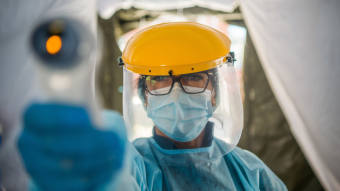