Peter Saville first came to Paris Fashion Week in the 1980s. At the time, the graphic designer — most famous as the creator of the indelible sleeve art for Joy Division, New Order and, later, Suede and Pulp — was collaborating on advertising campaigns with the Japanese designer Yohji Yamamoto. They were unsettling, featuring caustic slogans — “Game Over” — and showing neither models nor clothes. “Yohji gave the people he worked with total freedom,” says Saville. “No brief. The only proviso was that if he didn’t like it, he couldn’t put his signature to it, and therefore it couldn’t be published.”

You win some, you lose some. And this season Saville — surely Britain’s best-known graphic designer — has found himself once again much in demand. You could see his hand in the typography of the slogan T-shirts at Paco Rabanne and in the restyled logo for the French house of Courrèges. And it was Saville who masterminded the new logo, monogram and pattern for Riccardo Tisci’s first Burberry collection — a mighty responsibility. And yet he bats away any idea of a creative renaissance. “I have a late career plan, which is basically about tidying things up before I die,” he says. “And occasionally people ask me to do work, which is fine.”

The collaboration with Tisci came about suddenly, and had to be turned around in a matter of weeks — “with inappropriate haste for a corporate identity,” says Saville. “Keeping the same look in a trench and a chiffon blouse, that’s difficult. A trench has a certain feel, and it’s not like a lightweight, feminine garment. That was the problem.”

Their solution was a series of designs in what Saville calls “utility modern”. “The references were on a spectrum between Range Rover and British kink — Emma Peel’s costumes in The Avengers, that sort of thing,” he says. Although Saville is pleased with the results, which were plastered across billboards, buses and buildings in the run-up to Tisci’s London Fashion Week debut, his feelings about the industry at large are equivocal.

“There are moments where there’s a synergy between the disciplines, when fashion and art and design and music all reflect the now,” he says. But he finds the mercurial nature of the industry hard to handle.

“There was a moment in the 1980s when there was a new functionalism in fashion that was coherent with something I was feeling more generally,” he says. “And then it was suddenly dropped in favour of polka dots! That’s why I thought, ‘My God, I can’t do this.’ Fashion people don’t stay anywhere for very long, they move on to the next moment.”

His own involvement in fashion has come, he says, “in cycles”. His time working with John Galliano at Dior in the mid-1990s was creatively fruitful — they produced painterly campaigns shot by photographer Nick Knight — but ended, he says, with his being fired by Bernard Arnault. “What we produced was not what Mr Arnault interpreted as advertising,” he says.

Why have so many designers turned to Saville now? “[Factory Records’ co-founder] Tony Wilson would often refer to what we were doing as the art of the playground,” says Saville. “The record covers reached people at an extraordinarily formative moment in their lives. Now those individuals have worked their way through the hierarchy and have arrived into positions where they’re the decision makers.”

That would include Tisci, Courrèges’ creative director Yolanda Zobel, and Raf Simons, who drafted Saville in to remake the Calvin Klein logo last year. “I am not a big fan of the cartels who own fashion,” he says. “But I can’t help but be respectful of the founders of those organisations — of André Courrèges or Thomas Burberry or Calvin Klein.”

When he redesigned the Givenchy logo in the early 2000s, Hubert de Givenchy was still alive: “I felt him looking over my shoulder,” he says. “Somebody is going to do this work — whether it’s me or someone else. And if this work is going to be done, it should be done respectfully. That, I can do.”

For more trends and all of our fashion week coverage, visit ft.com/womenswear.

Explore the series
READ MORE
A shore investment: why luxury brands are headed to the beach 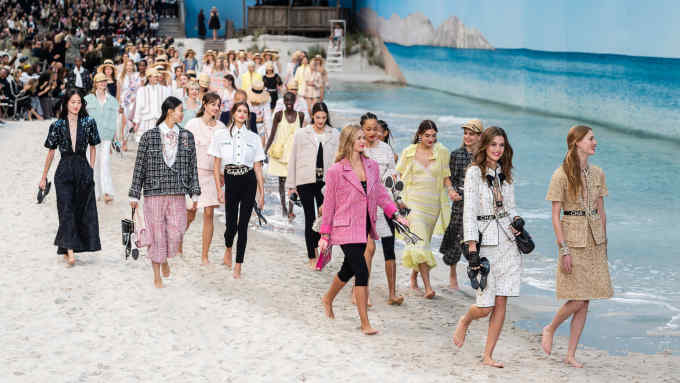