Business school students find voices in an age of protest

MBAs are turning to campus activism, inspired by business leaders

When Keith Scott was shot and killed by a policeman in North Carolina in September, Matt Bubley felt compelled to join a rally organised by his fellow students at Dartmouth College’s Tuck School of Business.

The second year MBA student and intern at McKinsey, the management consultancy, says he was surprised by the level of support the organisers, a group of his classmates called Black Students at Tuck, attracted. Three-hundred students — close to half of those enrolled at the school — joined a demonstration on the front steps of Tuck’s main campus building against police violence towards black people.

“Most of the student body, like me, are white, so I was moved by how many people turned up,” Mr Bubley says, adding that the credit should go to the organisers. “It is a feeling that business people ought to be concerned about what goes on in the broader world around them.”

Business schools have not traditionally been regarded as hotbeds of activism. Even at the height of US civil rights protests in the 1960s, when students on campuses such as University of California, Berkeley, battled with police, those on MBA courses were conspicuous by their absence, according to staff and alumni.

But political events of the past few years, including the policies of President Donald Trump and concerns about gender equality, have changed the mood among many studying at top business schools both in the US and Europe.

The shift reflects the world of business, where leaders such as Bill Gates and Mark Zuckerberg use their positions to push for change in healthcare and the environment, according to Bill Boulding, dean of Duke University’s Fuqua School of Business.

Students are disappointed with the political process in effecting social change, Mr Boulding notes. “MBA students are recognising that they have a strong voice in society and that business provides a platform for addressing many issues,” he says.

Mr Bubley agrees. “We have done a lot of work on racial justice in the classroom, and people see that it is important to business,” he says, noting that implicit bias awareness testing is now part of the core leadership curriculum. 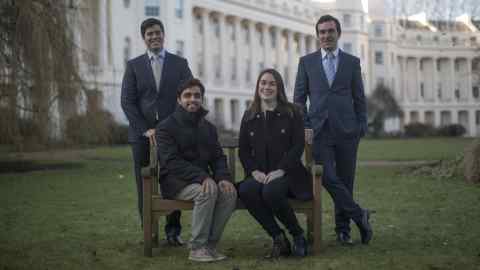 Another reason why MBA students are willing to campaign is efforts by schools to broaden their appeal beyond people hoping to fast-track careers in investment banking and consultancy, to executives from the public sector and not-for-profits. Increasing numbers of applicants put “social impact” goals in their business school applications, according to Paul Bodine, founder of Admitify, the MBA admissions consultancy.

Theo Grzegorczyk, who worked as a local field organiser on Barack Obama’s 2008 presidential campaign before moving into television production, is in the final year of an MBA at Berkeley’s Haas School of Business.

When he learnt in January that an Iranian student in his MBA class might not be able to return to campus because her homeland was listed in Mr Trump’s first attempted travel ban, Mr Grzegorczyk wrote an open letter of protest to the school’s dean, which attracted 1,000 student signatures in 24 hours.

Many signatories were studying for business and management qualifications other than the MBA, but those on Mr Grzegorczyk’s course were a driving force in getting people to sign, he says.

“We are a tight-knit community of 250 students at the full-time MBA programme at Haas,” Mr Grzegorczyk says.

Ms Smith joined the MBA programme following guidance and support from Management Leadership for Tomorrow, a not-for-profit body helping minorities to apply and matriculate at American MBA programmes, something Ms Smith claims fostered a desire to help others.

Not everyone in Ms Smith’s MBA class is so eager to take a stand. “Some people want to help but don’t know how.”

Political activism brought Winnie Fuchs to London Business School. She was choosing between MBA offers when the school invited her to attend a weekend conference on gender equality organised by Women in Business, the student lobbying group, held on the Regents Park campus.

Ms Fuchs is now co-president of the LBS Women in Business Club, which encouraged students to attend the recent women’s march through London, part of a global demonstration to show opposition to misogynistic comments by President Trump.

She admits that the group did not march in an official LBS capacity. “We wore LBS backpacks but we didn’t make a banner.” But she stresses the wider value of campus activism to the MBA experience.

“The current political environment has taught us to be more vocal about our opinions,” Ms Fuchs says. “At LBS, that means students seek out the discussion with others.”

Business schools are often very diverse, with students from many different countries. This can be a barrier to rallying support for public protests on campus, according to Winnie Fuchs, an MBA student at LBS, where 95 per cent of MBAs are from outside the UK.

“Brexit is a major concern for me as a European, but not so much for Americans in my class,” she says. “People care about what is going on in the world as a whole more than . . . in a particular country.”