The prime minister also said the Conservatives would double public research and development spending to £18bn by 2024-25, compared with 2017 levels, in a move that would offset the loss of EU funding after Brexit.

While some plans had been previously announced, Mr Johnson’s speech in Coventry involved some significant new commitments by the Tories.

He said a future Conservative government would ensure every household was within 30 miles of an electric vehicle charging point through a £500m investment in a “fast-charging network”.

Mr Johnson also announced a new target for offshore wind power capacity, increasing it from 30 gigawatts to 40GW by 2030, which he claimed would create up to 9,000 new jobs.

He said £800m would be invested in technology that captures carbon dioxide gas produced by burning fossil fuels and pumps it deep underground, while £500m would be spent helping energy intensive industries reduce their emissions.

Successful science is not based on money alone. We will also need to maintain full participation in European funding schemes

The prime minister announced plans for an advanced research projects agency that would support “blue skies research and investment in UK leadership in artificial intelligence and data”.

Business and science lobby groups welcomed the prime minister’s commitment to increase research and development spending if the Conservatives are re-elected, but warned that Mr Johnson appeared to be signalling a damaging U-turn on collaboration with EU partners.

His proposal to “replace” EU funding with the £18bn package implied that a Tory government would no longer take part in the bloc's Horizon research and innovation programme, said one group.

“It is two steps forward but could be one very big step back for business,” said Felicity Burch, director of innovation and digital at the CBI. 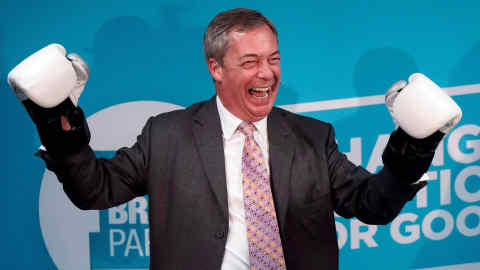 “We welcome the ambition and commitment to R&D spending . . . But moving away from European collaborative opportunities would be a big concern for British business and investors in British science and innovation.”

Venki Ramakrishnan, president of the Royal Society, Britain’s national scientific academy, said: “Successful science is not based on money alone. We will also need to maintain full participation in European funding schemes and the collaboration that they promote, rather than trying to replace them.”

Further education colleges welcomed the spending. David Hughes, chief executive of the Association of Colleges, called the “long overdue” investment “great news for the 2.2m people who study and train in colleges every year and who deserve the best facilities”.

Keep up with the latest UK election news

Subscribers can add ‘UK general election’ to myFT to receive instant alerts about new stories or a daily/weekly round-up.