We use cookies (opens in new window) for a number of reasons, such as keeping FT Sites reliable and secure, personalising content and ads, providing social media features and to analyse how our Sites are used.
Manage cookies
Accept & continue
Trump Russia ties

President Donald Trump held a second, private encounter with Russian president Vladimir Putin at the G20 in Hamburg that US officials did not disclose at the time despite the intense scrutiny on the first meeting between the two leaders.

Mr Trump and Mr Putin met for the first time at the G20 summit where they held discussions for 135 minutes. There was huge attention on the meeting, which was also attended by the US and Russian foreign ministers, particularly after Mr Putin claimed that Mr Trump had accepted his denial of Russian interference in the US election.

But Mr Trump had a second meeting with Mr Putin at the closing dinner when both men pulled away for talks attended only by Mr Putin’s interpreter. The meeting underscored the elusive nature of relations between Mr Trump and the Russian president that has been in sharp focus since he launched his campaign for president.

“The Fake News is becoming more and more dishonest!,” Mr Trump tweeted on Tuesday night. “Even a dinner arranged for top 20 leaders in Germany is made to look sinister!”

The latest Russia-related revelation came on the day that it emerged that Robert Mueller, the special counsel leading the FBI Russia probe, is looking into a meeting that Donald Trump Jr, the president’s son, held with a Russian lawyer in June 2016. 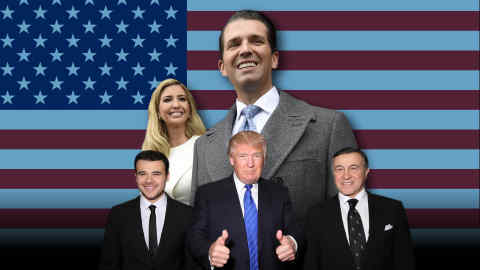 Scott Balber, a New York lawyer whose client Ike Kaveladze also attended that meeting, told the Financial Times that one of Mr Mueller’s team had contacted him to arrange a meeting between Mr Kaveladze and FBI investigators. “We have agreed for him to co-operate fully and that includes speaking with Mueller’s team,” he said.

The second Trump-Putin meeting was revealed by Ian Bremmer, president of Eurasia Group. Sean Spicer, White House spokesperson, played down its significance, describing the situation as a “brief encounter” that occurred during the final dinner.

One White House official stressed that Mr Trump had talked to many G20 leaders at the dinner hosted by German chancellor Angela Merkel. Each leader was allowed one interpreter, which was a Japanese speaker in the case of Mr Trump since he was seated next to the wife of Shinzo Abe, Japan’s prime minister. The official said Mr Trump therefore had to rely on Mr Putin’s translator when the two leaders held their private conversation.

“The insinuation that the White House has tried to ‘hide’ a second meeting is false, malicious and absurd,” said the official.

The day after returning to Washington from the G20, Mr Trump tweeted that it was “time to move forward” with Russia and stop fixating on the Russia probe that he calls a “witch hunt”. He also denied that he had not pressed Mr Putin on the US intelligence community view that Moscow orchestrated cyber attacks to meddle in the election. 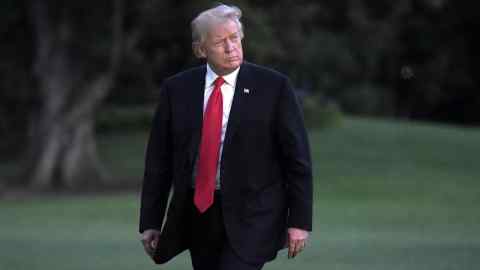 Mr Trump faced another damaging Russia revelation after his return over the claim that his son had met a Russian lawyer named Natalia Veselnitsaka in 2016 to obtain information about his election opponent Hillary Clinton. Don Jr — as his son is known — initially claimed the meeting was unrelated to the campaign, but after shifting his explanation several times he released emails that contradicted that version of events.

When told over email by a British music publicist that the top prosecutor in Russia could provide incriminating information on Mrs Clinton, Don Jr had written: “I love it.” The email exchange undermined the repeated claim by his father that none of his campaign officials had any connection to Russia or the Kremlin.

Don Jr came under further scrutiny after it emerged that the 2016 meeting was also attended by Rinat Akhmetshin, a US-Russia national who served in the Soviet military in the 1980s but has more recently been a lobbyist in Washington working for clients aligned and opposed to the Kremlin.

Separately on Tuesday, the White House nominated Jon Huntsman, the former Utah governor and US ambassador to China, to serve as its ambassador to Moscow. His nomination comes days after Sergei Kislyak, the Russian ambassador to the US who has been one of the key players in the Federal Bureau of Investigation’s Russia investigation, completed his tour in Washington.