Economies of scale are working in favour bigger groups

Employers are trying to do more for retirement savers in the US by providing them with better value and encouraging them to put more money into defined contribution retirement schemes such as 401(k) plans. As a result, the large financial advisers that guide DC plans are growing to offer a greater number of services — but this is squeezing out small practitioners.

That growth among larger groups is evident in retirement assets. The advisers in the FT 401, the Financial Times’ fifth annual list of top DC plan advisers in the US, manage an average of $1.65bn in DC plan assets across corporate, non-profit and government employers. That is 31 per cent higher than the $1.26bn averaged in last year’s FT 401 listing thanks to a mix of rising financial markets, organic growth and industry consolidation.

Some 38 per cent of this year’s list are advisers with $1bn or more in retirement assets, up from 33 per cent last year. Part of that growth is due to a 14 per cent rise in the number of DC plan clients, to an average of 84 per adviser. 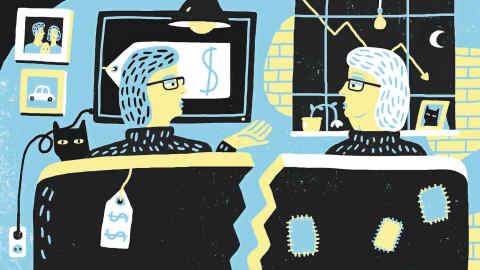 Employers’ heightened demands benefit advisers and companies that focus on retirement and they have taken market share from advisers that serve just a handful of DC plans.

Specialist plan advisers, which includes the advisers in the FT 401 ranking, control roughly two-thirds of DC plan assets, according to the Retirement Adviser University, a professional education provider.

Employers are asking retirement advisers to do more for employees participating in DC plans. FT 401 advisers say the service most often sought by plan participants is financial literacy education, followed by advice on how to handle savings after retirement.

Some 91 per cent of FT 401 advisers say they conduct one-on-one meetings with plan participants to discuss retirement investing and planning while 86 per cent offer on-demand assistance to participants via phone or internet.

Providing these services often requires an adviser to have the scale to make these time-intensive activities economical, or have the capital to buy technology (such as online dashboards) that can assist in providing advice.

This pressure has prompted many smaller advisers to seek mergers, while some have abandoned the retirement business. Mergers are helping make the large, elite retirement advisers even larger and more dominant.

Just under half the advisers in this year’s FT 401 have added business through acquisition over the past three years. These advisers estimate that such transactions have added an average of 14 per cent to their DC plan assets.

Retirement advisers have become common takeover targets in recent years. Insurance brokerage Hub International has bought several retirement-orientated advisers in the past two years; its biggest purchase was in September when it took over Global Retirement Partners, headquartered in San Rafael, California, which manages roughly $40bn in retirement assets.

These deals have rearranged and changed the names of the top retirement advisers. This year’s FT 401 advisers hail from 40 states and Washington. Understandably, more populous states such as California, Texas and Massachusetts have more advisers on the list.

The increased pressure to improve efficiency, which is behind many of the mergers, is also pushing DC plan advisers to seek lower-cost investments for these plans.

This imperative has helped build demand for passive index-tracking funds, which tend to cost less.

Such passive vehicles charged on average just 0.08 per cent last year, compared with 0.14 per cent in 2011, according to the Investment Company Institute, an industry body.

A drift towards cheaper index investing continues. Among the FT 401, passive funds have risen from 33 per cent of DC plan assets in 2018 to 36 per cent this year.

Managing business costs is not easy, especially as advisers are often asked to do more for a lower fee. While the FT 401 cohort in 2018 cited lowering their fees as its biggest challenge, the main task for the 2019 group is managing the business of their advisory practices, including structure, staffing and profitability.

The core of these advisers’ work remains helping employers improve the retirement prospects of their staff. To that end, advisers have continued to help popularise the practice of automatically enrolling workers in DC plans though individuals can still opt out. FT 401 advisers say that, on average, 52 per cent of their DC clients use automatic enrolment, whereas only 50 per cent of DC clients did so in 2018.

Advisers also consult employers on their fiduciary duties: their obligation to oversee employees’ retirement assets as though they were their own.

This issue will soon be in the spotlight. The US Department of Labor is expected to propose rules before the end of the year governing the fiduciary responsibilities of advisers and brokers in relation to DC plans.

Any proposals designed by the federal agency to enhance consumer protection will come just months after the introduction of rules, by the US Securities and Exchange Commission in June, that cover brokers’ responsibilities to clients.

Both agencies have sweeping powers and responsibilities for policing the investment and savings sector.

No one knows exactly what to expect from the proposals, nor how well any suggested rule changes put forward by the labour department will align with the recently revised SEC regulations. The only sure thing is the growing complexity of retirement advice business.