Tech rout pulls Nasdaq down to worst week since March

Technology stocks extended losses into a second day on Friday, although a late rush to “buy the dip” in the likes of Apple and Tesla mitigated some of the damage from what has been a wild week on Wall Street.

The Nasdaq Composite index, which fell 5 per cent on Thursday and was down a further 5 per cent in morning trading on Friday, pared back the losses to 1.3 per cent for the day.

Shares in Apple, the largest US company, turned positive late in the session, reversing an initial fall of 6 per cent, which came on top of an 8 per cent decline on Thursday. At its Friday low it had lost more than $300bn in market capitalisation in less than two days. It closed 0.1 per cent higher on the day.

The electric car maker Tesla also suffered heavy selling early on Friday before rallying to a 2.8 per cent gain.

The S&P 500 index ended down 0.8 per cent, as investors refocused on a US employment report that showed the world’s largest economy added 1.4m jobs in August. The figure met economists’ expectations and contributed to a notable improvement in the unemployment rate, to 8.4 per cent from 10.2 per cent in July.

Quant funds that run momentum strategies will have built up a big bias to tech. The higher volatility is a trigger for these quant funds to sell off

The drop in tech stocks will naturally trigger “a fairly big buying of the dip” from investors “standing on the sidelines, waiting to fill their portfolios with the octane” of growth-oriented companies, said Jim Paulsen, chief investment strategist for the Leuthold Group.

Jonas Goltermann, senior markets economist at Capital Economics, characterised the recent run in tech stocks as “frothy” but pushed back on comparisons to the dotcom bubble that burst roughly two decades ago.

“Unlike in 2000, the largest tech firms today are highly profitable and their valuations, while punchy, don’t look so obviously unsustainable,” he said. “So while this correction may well have further to run, and we continue to think that tech stocks will fare less well than most other sectors as the economic recovery continues, we don’t expect that a collapse in tech stocks will drag the entire market down for an extended period in the way that it did in 2000-02.”

The turbulence on Wall Street this week has been amplified by funds that execute trades automatically using algorithmic models, said Remi Olu-Pitan, multi-asset fund manager at Schroders. A sharp rise in measures of expected volatility probably pushed them to begin selling, she said.

“Quant funds that run momentum strategies will have built up a big bias to tech,” said Ms Olu-Pitan. “The higher volatility is a trigger for these quant funds to sell off.”

She added that “nervous retail investors” who had bought heavily into the tech rally were also now selling out of fear of seeing more large downward moves.

The Vix, a measure of expected S&P 500 volatility, fell on Friday to 30.4 after initially rising to 37.5. It still remains well above its long-term average of about 20, having pushed higher since late August. 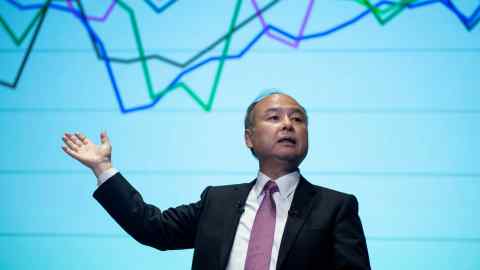 Investors reacted to the jobs report by pushing down the price on US government bonds, sending yields rising. The yield on the benchmark 10-year Treasury note rose more than 8 basis points to 0.716 per cent. The dollar, which has weakened significantly since July, was flat against a basket of six peers.

Some analysts warned that the better than expected report could deter Congress from acting quickly to pass another relief package to blunt the economic damage from the coronavirus outbreak.

“If Congress does not approve [a new package] ahead of the election, there is definitely a risk you could have a slowdown in growth,” warned Chetan Ahya, chief economist at Morgan Stanley.

Oil prices were dinged by concerns over crude demand and signs of rising supply from Opec producers. Brent, the international benchmark, fell 3.8 per cent to $42.40 a barrel and West Texas Intermediate, the US benchmark, dropped 4.5 per cent to $39.52.

In European equities, the continent-wide Stoxx 600 index shed large gains after Wall Street opened to close down 1.1 per cent.

Still, the continent’s financial shares performed strongly after the Spanish banks Bankia and CaixaBank entered exploratory talks on a potential merger to create the country’s largest domestic lender, with total assets of more than €650bn.

Shares in Bankia and CaixaBank rose 33 per cent and 12 per cent respectively, with their rival Banco Sabadell climbing 14 per cent and investors loading up on other European bank stocks amid speculation about more such deals to come between the bloc’s struggling lenders.

Shares in France’s Société Générale gained more than 5 per cent, while Germany’s Commerzbank climbed over 9 per cent and Bank of Ireland rose 4 per cent.

Video: What if inflation returns? | Charts that Count
Reuse this content (opens in new window) CommentsJump to comments section