In a former Bath stone mine 100ft below the rolling Wiltshire countryside, one low-profile company is benefiting from a renewed thirst this year among retail investors for trading markets.

Octavian — a 1m sq ft wine warehouse holding more than 10m bottles at a temperature of 13C to 14C — has received a surge in business as investors have flocked to invest in fine wines.

“We’ve seen a lot more interest from investors wanting to open an account,” said managing director Vincent O’Brien, whose mine was used to store missiles and torpedoes during the second world war before being converted into a wine store about 30 years ago.

Inquiries have more than doubled compared with a year ago, while new account openings are up 70 per cent. Younger customers, in their late twenties and early thirties, were becoming more interested, he added.

A rollercoaster year in financial markets, in which stocks plunged in March over concerns about coronavirus before rebounding to new highs, has prompted a resurgence in retail investor day trading.

Fine wine, an investment market that has fallen in and out of favour with retail investors over the years, is also enjoying renewed interest this year. While only a tiny fraction of the size of global equities markets, it is wine’s ability to act as a haven, rather than to provide astronomical gains, that has attracted investors.

Wine’s relatively stable performance, which includes a fall of just 1.1 per cent during March’s market turmoil, comes despite the impact of US tariffs on French wine. It also comes in spite of lockdowns in many countries that forced the closure of restaurants, which are large buyers of wine, and made tastings, a key part of the sales process, more difficult.

Tom Gearing, chief executive of £150m-in-assets Cult Wines which held tastings with wineries over Zoom during lockdown, capitalised on growing investor demand this spring. Spotting an opportunity to pick up wines at bargain prices, he raised a £5m special opportunities portfolio in four weeks from 80 investors, of which 31 were new clients to the company. The portfolio is up 17.5 per cent this year, according to Mr Gearing, who was previously a finalist on the UK version of The Apprentice.

Gregory Swartberg, chief executive of London-based wine investment company Cru Wine, who trades the company’s own money and also on behalf of clients, says his book of clients has risen by about two-thirds this year.

“To our surprise, even considering the fact that restaurants were not taking in a lot of stock and tried to sell stock, [the wine market has] seen a tremendous amount of demand coming from private clients,” said Mr Swartberg.

And at wine merchant Bordeaux Index, the number of new trading accounts opened is 60 per cent higher this year than in 2019. “Most notably, [wine] did not drop materially during the Covid crisis,” said head of wine investment Matthew O’Connell, adding that “wine has shown little correlation with financial assets during disruptive market events”.

Some parts of the market have been especially fizzy. Liv-ex’s Champagne 50 index rose 8.3 per cent, driven by top-end vintage champagnes such as Louis Roederer’s Cristal, Dom Pérignon and Salon. Bollinger’s La Grande Annee 2008, for instance, rose 27.4 per cent. Italian wine, as measured by Liv-ex’s Italy 100, rose 6.7 per cent.

The market’s quirks have also thrown up trading opportunities. 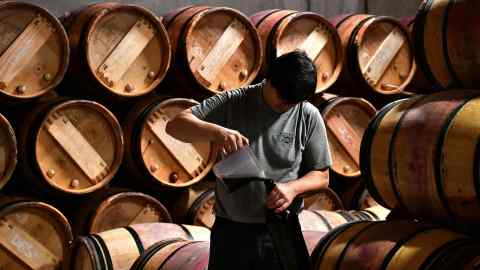 There had been speculation, for instance, that Château Lafite Rothschild would change its famous label for its 2018 vintage, which marks 150 years since the Rothschild family bought the Pauillac winery. Cru Wine’s Mr Swartberg bought a large amount of the wine for clients and the company’s own account this summer.

When the label was released two months ago, it featured a tiny hot air balloon with the letters CL — Roman numerals for 150. Mr Swartberg made a quick profit of about 30 per cent as collectors snapped up the wine, which will not be bottled until next year.

While trading costs remain much higher and liquidity is far lower than in stock markets, there are signs that the wine market is becoming easier for retail investors to access. Octavian this year launched a portal allowing its customers to trade with each other. Mr Gearing’s company advises customers on how they should rebalance their portfolios and uses an algorithm to help determine which wines and regions to buy and sell.

“The days when you would get an allocation of wine, put it in the cellar for 10 years and forget about it are over,” said Mr Gearing. “More analytics now allow you to trade.”