Coronavirus induces strong and long-lasting cellular immunity after infection, new research shows, suggesting people are unlikely to quickly catch the disease again and increasing the chances vaccines will be effective.

“Our study is the first in the world to show robust cellular immunity remains at six months after infection in individuals who experienced either mild/moderate or asymptomatic Covid-19,” said Professor Paul Moss of the University of Birmingham. Prof Moss heads the UK Coronavirus Immunology Consortium that studied 100 UK healthcare workers who were infected early in the Covid-19 pandemic.

The findings, which have not yet been peer-reviewed, are an encouraging sign for the development of vaccines that aim to induce immunity without causing disease, the researchers said. They also suggest that few people will be reinfected with the Sars-Cov-2 virus responsible for Covid-19 soon after suffering a first infection.

The human immune response to viral infection is extremely complex, involving the production of both antibodies and cells — particularly T-cells — to fight the virus. Other research has shown that antibody levels often decline quickly after Covid-19 patients have recovered.

In contrast, the results of the new study “show that T-cell responses may outlast the initial antibody response, which could have a significant impact on Covid vaccine development and immunity research,” said Shamez Ladhani, an epidemiologist at Public Health England and an author of the research.

“This is promising news,” said Fiona Watt, executive chair of the Medical Research Council, which co-funded the project. “If natural infection with the virus can elicit a robust T-cell response then this may mean that a vaccine could do the same.” 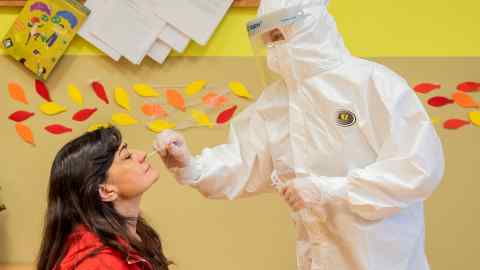 Antibodies — relatively small protein molecules — are much easier to detect and analyse in blood samples than the far larger and more complex T-cells, so have been studied more extensively by Covid-19 researchers.

The UK Coronavirus Immunology Consortium tested blood from 100 healthcare workers who tested positive for Sars-Cov-2 during March and April: 44 had no symptoms and 56 had mild or moderate respiratory symptoms but none were ill enough to need hospital treatment.

All 100 blood samples had T-cells that targeted a range of proteins in Sars-Cov-2, including the key “spike protein” which the virus uses to enter human cells and which is a target of Covid-19 vaccines. In contrast, antibody levels in some people had dwindled to undetectable levels within six months.

The size of the cellular response varied markedly between individuals. On average it was 50 per cent higher in people who had experienced symptoms than in those who were asymptomatic six months earlier.

More research was needed to discover whether this heightened cellular immunity would provide more protection against reinfection in people with more serious symptoms, said Dr Ladhani. Asymptomatic individuals may be able to fight off the virus without needing to generate a large immune response, he added.

A few cases of people being infected twice with Sars-Cov-2 have been reported but numbers are “reassuringly low” among tens of millions of Covid-19 cases, said Dr Ladhani: “We would expect only a tiny minority of people to be reinfected.”

Eleanor Riley, professor of immunology at the University of Edinburgh, who was not involved in the research, added: “This is all very good news and bodes well for the long term, in terms of both vaccine development and the possibility of long-term protection against reinfection.”