If you think the same, join us
How To Spend It Interiors

With her new product line and social initiative, the designer is setting a new style agenda for Generation Y

“I feel like the maddest woman in the world for looking to open a retail space at the moment,” says Sophie Ashby. In the meeting room of her headquarters in Ladbroke Grove, the South African-born, British-raised interior designer seems in possession of all her faculties. At once earnest and serene – despite the broiling heat outside – she possesses a kind of boyish glamour and poise that anyone elegant would adore in their interior designer.

She is, of course, entirely sensible. How could she not be, when in six years she has built Studio Ashby up from “a one-woman band with a laptop” to a 12-strong team that is playful and youthful in its aesthetic, but mature in its ethos and professionalism? Projects run from multimillion-pound apartment developments and luxurious family homes in grand parts of London to country retreats in the Cotswolds. She has designed the Robertson Small Hotel in South Africa; Ikoyi, the Nigerian restaurant in St James’s; and is currently working on a 17,000sq ft, Grade II-listed home in Belgravia. On top of that, she found time during lockdown to start a charity to encourage diversity in the interior-design industry. All by the age of 32.

Unsurprisingly, Ashby has become the poster girl of interiors for the millennial. One part of a design power couple, she has been married for two years to the handsome tailor and consummate suit-wearer Charlie Casely-Hayford. Their former flat in Television Centre (the old BBC headquarters), with its flashes of mango yellow and contemporary African art, is a familiar reference for anyone who follows fashion interiors on social media or just dreams of being Sophie Ashby.

She has come to the fore as Instagram and Pinterest have inspired a new generation to care about how they style their homes. “There’s been this big revolution, hasn’t there? Interior design used to feel so distant,” she says, sitting at the long table in her meeting room. “Other people did that and you went to Ikea or John Lewis or Habitat. Interiors wasn’t something that was part of the lexicon, but now people are obsessed.”

It’s this obsession that has led Ashby to create Sister, a retail brand launching online this month, with a central-London store coming next year. Promising products “from 20 quid”, her aim is to satisfy that younger demographic, many of whom follow her work but can’t possibly afford the full Studio Ashby interior rehaul. “At 32, who can?” she says.

“We don’t sell the pieces we make or commission, but Instagram makes you realise there’s a market for them. I get so many messages – ‘Can I buy that headboard? Where did you get that table?’ – but we’re not set up to do that. Most of the people who follow us are 23-to-35-year-old women. I wanted to open up our world to them.”

The name and spirit of the brand was inspired by Ashby’s younger sister Rose, the head chef at Spring, Skye Gyngell’s innovative London restaurant. “She’s so free-spirited, so much fun, although she has a lot of responsibility. That’s what I’m trying to get back to a little bit,” she says. Ashby is also hoping to emulate something of the atmosphere of her husband’s Chiltern Street shop, a tailor founded with his late father Joe Casely-Hayford, which she designed. “It’s so personal – you have a whisky, come with your best man if you’re getting married,” she enthuses of the space. “I want to give people an experience. So much of what we do with homes is thinking of all those things that come together to make somewhere feel wonderful.”

Sister will comprise a small collection of made-to-order furniture, including the soon-to-be-cult Polar chair, which is like a gloved hand in teddy-bear fabric, and the Bloomsbury Group-inspired cabinets with brushstrokes by artist Claire de Quénetain. They’ll sit alongside antique pieces like the pair of 1950s wing chairs, reupholstered in a cream bouclé, in her meeting room.

Chunky Italianate marble plinths, a bowl of Carrara marble eggs and outsized patchwork cushions made from offcuts from fabulous past projects are examples of the “bits and bobs and knick-knacks” you can buy straightway: “All of our soft furnishings are made out of scrap fabric: napkins, blankets, entry-level-type products. I’ve been collecting the fabric for years.” She’ll also sell art: “Affordable, wonderful, colourful art. The sort of stuff we put in our interiors all the time.”

Art is where all Studio Ashby interiors begin. “In a room in a house, out of all the stuff that I might put in there as an interior designer, the most important thing is the art,” she says. “If you get it right, that’s what sets the mood.” She studied history of art at Leeds University, but the emotive power of art was something she learnt as a child. “My parents have a few pieces that aren’t investments but are just nice, and we moved house so many times that it became clear to me that when those pieces were unwrapped and put on the wall, that’s when it became home. You feel more than what you feel when you look at a chair,” she says.

Much of the time, her clients already have the artwork that she uses as a starting point. What if she hates it? “That’s hard, but it doesn’t happen that often,” she says, diplomatically. “For the most part we’re not clashing, but art is a very personal thing. If it makes the client feel good or feel something, if it’s doing something for you and your soul, that’s good enough for me.”

She and Casely-Hayford are building their own collection of contemporary African art. “It’s not big, but a lot of collectors would advise you to find a little area in the world of art that speaks to you and begin there,” she says. “Then the work tells a bit of a story and they all connect to each other in some way.” The couple, who are renting a rather magnificent Georgian house in Spitalfields (the former home of the writer Jocasta Innes), met on a blind date set up by a friend. “Thank God for that friend,” she laughs.

It all sounds lovely, and Ashby is acutely aware of the tremendous privilege she enjoys. In June, the Black Lives Matters movement and the Blackout Tuesday social-media protest were a wake-up call about her industry. “I posted a black square [on Instagram] and thought, ‘This is just not good enough’,” she says. She looked at the top 100 interior-designer lists from across the world. “If there was one person of colour in there, it was amazing,” she says. The rest was “purely white. And it wasn’t just white people. It was a certain class of white people, like myself. I started thinking about the future and what it might mean for our children.” 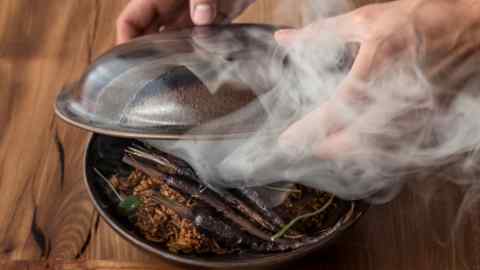 Now, alongside interior-designer Alexandria Dauley, she has founded United in Design, which will come into operation next year and aims to address the lack of representation in the industry from black, Asian, ethnic minority and disadvantaged socio-economic communities. Magazines and industry players have signed up and committed to its pledges; some will create apprenticeship schemes, with the aim of having a real impact on employment opportunities and youth outreach. “I don’t think in any other time I would have been able to set up a charity in four weeks,” she says. “But it felt really urgent and with lockdown there was a space to do it.” That’s Sophie Ashby, making even the gloomiest spaces brighter.