Within days of the UK’s 2016 vote to leave the EU, pharmaceutical companies began planning for a worst-case scenario — well ahead of many other sectors.

But, with barely a month to go before Britain’s scheduled departure, industry anxiety is mounting over a no-deal Brexit’s impact on the supply of drugs, as well as on the UK’s outsized share of global life sciences investment.

“We’ve all worked very, very hard to be ready for whatever happens,” Pascal Soriot, chief executive of AstraZeneca, the Anglo-Swedish drugmaker, told the FT. “But it’s not optimal because there’s a lot of things we have no idea about.”

Despite all the industry’s planning, many potential problems are beyond its control — such as congestion at ports and the regulatory regime on both sides of the English Channel. Both could affect whether there are sufficient supplies of vital drugs.

Moreover, both the UK government and business have recognised that investment in the sector could be dented, because Brexit implies extra costs for pharmaceutical companies, which in turn could affect patients’ access to medicines.

David Jefferys, an executive at Eisai, the Japanese pharma company, who has the regulation brief at the Association of the British Pharmaceutical Industry, said companies could not eliminate the possibility of patients facing drug shortages in the event of no-deal.

Eisai has stockpiled around four months’ worth of medicines, considerably more than the six weeks that the UK health department has instructed companies to keep.

But the industry is also facing a more bureaucratic but equally serious problem: how to ensure medicines licensed in another European country can continue to be sold in the UK.

The Medicines and Healthcare Products Regulatory Agency, the UK drugs regulator, has agreed in principle to recognise approvals already granted in one of the 27 remaining member states. But these licences now have to be translated into the British system, so that, in Mr Jefferys’ words, “they’ll have currency in the UK on March 30 as they did on March 29”.

Dossiers covering each medicine, including safety information, will have to be deposited into a new agency database because the EU will not permit data to be transferred directly from its computer systems.

“This is a big database to build and they’ve got less than a month to build, test and validate it,” Mr Jefferys warned.

Many in the industry also fear the UK will find itself excluded from European clinical trials, which not only generate significant income but can give participating patients the chance of a life-saving or life-enhancing treatment.

To minimise the disruption caused by no-deal, the UK government is pushing through so-called “statutory instruments” — amendments to primary legislation — covering areas from medicines approvals to clinical trials regulation.

But some in the industry are privately complaining the measures are being rushed through with too little consultation.

An official “impact assessment”, published in January to help establish the MHRA as a standalone regulator, made clear the risk that additional bureaucracy and cost may lead companies to decide against launching a medicine in Britain.

It acknowledged “a possibility that some medicines that would have been authorised in the UK” when the country was part of the European Medicines Agency — the EU body previously based at Canary Wharf — “will not be submitted to the MHRA due to business decisions”. It added: “This could have an impact on access to certain medicines and therefore to public health.” 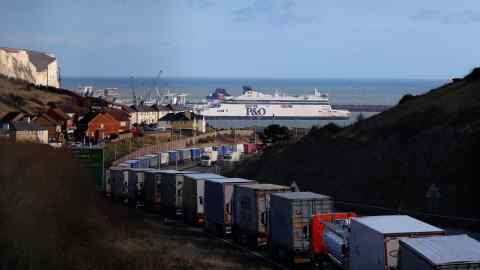 Life sciences is one of the UK’s most important industries, generating more than £70bn a year and employing nearly 241,000 people.

The size of the sector is out of proportion with the domestic market, highlighting Britain’s role as a platform for the international pharmaceutical business. The UK accounts for 3.5 per cent of global life sciences investment, the highest share in Europe if exchange rate effects are excluded, but its share of global sales is only around 2.6 per cent.

But now the costs of the British sector are going up, largely because of Brexit contingency spending and duplication.

Eisai has spent around £10m on transferring licences for about 60 medicines to Germany as well as on its stockpiling.

Larger companies have spent much more. GlaxoSmithKline last year estimated the cost to the company of the duplication of facilities at around £70m, while AstraZeneca last week said it anticipated spending between £40m and £50m.

While the Anglo-Swedish group is pouring £500m into a new life sciences campus in Cambridge, it is holding off on a potential further investment into a manufacturing facility it owns in Macclesfield, Cheshire, due to Brexit uncertainties. It invested £220m in the plant between 2015 and 2018 before calling a halt.

Asked what would determine his ultimate decision about whether to resume investment, Mr Soriot told the FT he needed “simply clarity” about how medicines were to be moved across borders post-Brexit.

“We just need to know what [the future trading environment] is . . . because if we have a manufacturing activity here, we have to export our products,” he added.