In a world in which government debt is rapidly rising, it’s hardly surprising that there’s growing interest among investors in Modern Monetary Theory. After all, one of its central claims is that budget deficits are, from a financing perspective, an irrelevance. So long as increased government borrowing doesn’t lead to inflation — and, at the moment, there really isn’t much of it around — we can all afford to relax.

As Stephanie Kelton notes in her book The Deficit Myth, governments with access to a printing press are “currency issuers” (exceptions include, most obviously, members of the eurozone). As such, all their spending could, in principle, be financed via the creation of cash. Taxes may serve other purposes — the redistribution of income and wealth, the discouragement of “sinful” behaviour — but, in the world of MMT, they serve no useful macroeconomic role.

In the real world, however, taxes are crucial. The fundamental difference between government finances and those of companies and households is not access to a printing press but, instead, the coercive power to raise taxes. A company making a severe loss cannot reduce that loss by imposing taxes on everyone else. A government can. A worker receiving a pay cut cannot force others to make up the difference. A government can.

Armed with this knowledge, creditors are understandably willing to accept mostly lower returns on government bonds than on other investments. Put simply, the risk of government default in the face of an adverse economic shock is lower than for other would-be borrowers.

Admittedly, there are limits, dictated largely by the political capacity of a government to raise revenues in difficult circumstances. Emerging markets often end up resorting instead to devaluation, default or inflation. In anticipation, borrowing costs spike.

Still, imagine for a moment that governments embrace MMT. Imagine too, as MMT proponents suggest, that control of the printing press is taken away from unelected central bankers and given to “accountable” elected fiscal representatives. Would we be any better off?

Far from it. Giving elected representatives the keys to the printing press is the equivalent of giving a gambling addict the keys to the casino. For many politicians, the primary objective is to remain in power. As such, they will too often be incentivised to pursue instant gratification at the expense of longer-term stability. In the early-1970s, the UK embarked on what became known as the “Barber boom”, thanks to the efforts of Conservative chancellor of the exchequer Anthony Barber to engineer an election victory in 1974. As it turned out, the Tories lost and, two years later, the UK ignominiously had to accept a bailout from the IMF. Central bank independence provides a useful bulwark against such behaviour.

More importantly, inflation and taxes are, in many ways, simply two sides of the same coin. Those governments without access to tax revenues can instead “debase the coinage”. Supporters of MMT claim this will never happen, yet history suggests otherwise: after all, it has been a tried and tested policy of kings and queens over hundreds of years. Too often, those with access to the printing press are prepared to take undue risks in the hope that “this time it’s different”. 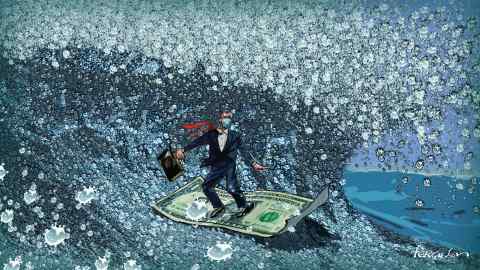 In truth, inflation helps solve the financing issues that proponents of MMT claim no longer exist. Negative real interest rates, a result of higher-than-anticipated inflation, serve to redistribute wealth away from private creditors (pensioners, for example) to public debtors. Much the same could be achieved through a wealth tax. At this point, we come full circle: the distinction between the printing press and taxes begins to break down.

Thanks to Covid-19, government debt is rising rapidly and, for that matter, appropriately. In the face of recurring lockdowns, we are better off allowing companies and workers to enter a period of economic “hibernation” in the hope that, once the virus is under control, they can thaw out. The alternative of multiple business failures and mass unemployment is of no use to anyone. In the process, however, we are in effect borrowing from our collective economic futures. At some point, some of us will be presented with a bill which, if hibernation policies succeed, we will be in a reasonable position to pay. The political process will decide whether that bill comes in the form of higher taxes, more austerity, rising inflation or eventual default. That, I’m afraid, is the deficit reality.

Citizens are not necessarily saddled with national debt / From Thomas Michl, Professor of Economics, Colgate University, Hamilton, NY, US