Advisers must prepare clients for ups and downs

A 13 per cent increase in the S&P 500 index over the first quarter of the year has provided some welcome relief for investors in US stocks, who had endured a torrid end to 2018.

Although the Dow Jones Industrial Average shattered several highs last January and again in October, these peaks were followed by a sharp fall that left the equity index down 5.6 per cent at the end of the year. The broader S&P 500 index similarly fell 6.2 per cent over the same period.

After several previous years of generally steady progress in stock valuations, advisers say factors that have helped induce the recent bout of volatility, such as US-China trade strains and Brexit, remain firmly in play.

“Volatility is more the norm, not the exception,” says Andy Schwartz, principal at New Jersey-based Bleakley Financial who is among the FT 400 Top Financial Advisers 2019 listing published on Thursday. “We got lulled into no volatility for all of 2017 and into 2018 and then all of a sudden everything sort of got crazy.”

On February 5 last year, the surge in market volatility caused the collapse in the valuation of XIV, an exchange traded note that allowed traders to bet on the US stock market remaining tranquil, in a day so torrid that US traders have since dubbed it “Vol-mageddon”.

Since then, financial advisers have had to deal frequently with clients anxious over sharp market falls. They have instead resorted to applying strategies to make the most from volatile conditions while keeping their clients’ long-term goals in mind. 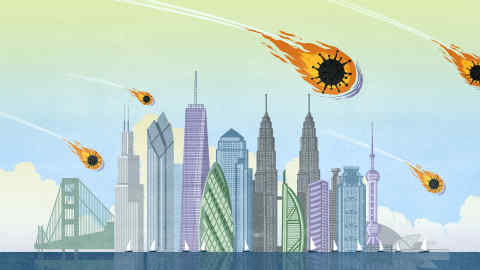 Yet advisers fielding such calls from clients about sudden market shifts often warn them against making knee-jerk changes to their portfolios.

“The two biggest emotions that drive people to do crazy things are fear or greed,” says Kevin Myeroff, chief executive of Ohio-based NCA Financial. Mr Myeroff urges his clients not to be unnerved by financial commentary which is often aimed at traders rather than long-term investors.

Advisers say older clients in particular — those retired or close to retirement — tend to worry more about downturns. For such investors, advisers manage volatility based on the client’s comfort and risk tolerance.

“For owning stocks and getting better returns in stocks over other asset classes, the price you have to pay is volatility,” says Patricia Baum, a Maryland-based adviser with RBC Wealth Management. “Typically, the financial plan will assume a rate of return based on how clients are allocated. If, for example, we have assumed a 5.5 per cent rate of return, we can go back and say: ‘Even though you are down this year, your average over three, five and 10 years is better than 5.5 per cent,’ ” adds Ms Baum, an FT Top 400 Adviser since 2013. 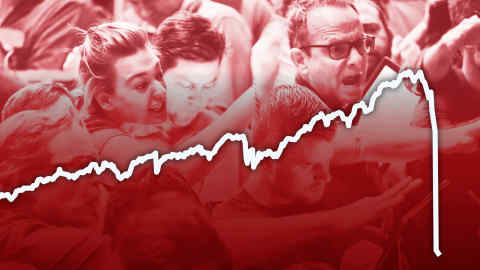 To guard against falls, Mr Schwartz says he asks clients what cash liquidity they need for events such as a child’s wedding or a property purchase that would require selling stocks to raise funds.

“As human beings, we have a tendency to take the immediate past and extend it out into the future,” he says. “The last recession has left a permanent mark in people’s mind.”

The stock market slide of late 2018 may have worried investors, yet many advisers saw it as a chance to increase their clients’ equity exposure. Nannette Nocon, an adviser with Ameriprise Financial, explains this principle using a shopping analogy: “If tuna is on sale and you like tuna, would you walk away from a sale or do you buy a couple of cans?”

Another benefit of markets tanking in late 2018 was the opportunity for advisers to harvest tax losses. This technique helps offset capital gains tax on profitable investments by incurring losses on others.

Get alerts on Markets volatility when a new story is published