François Hollande urges Europe to stand up to Donald Trump

French president François Hollande has called on Europe to respond firmly whenever Donald Trump promotes the break-up of the EU, adopts protectionist trade measures or refuses to admit refugees.

“Whenever there are statements from the US president on Europe and whenever he talks of Brexit as being a model for other countries, I believe we must respond,” Mr Hollande said on Saturday.

Speaking to reporters on the sidelines of a so-called Club Med summit of southern European leaders in Portugal, the French president added: “When [Mr Trump] adopts protectionist measures, which could destabilise economies . . . and when he refuses to accept refugees, while Europe has done its duty, we have to respond.”

“The talk we hear coming from the United States encourages populism and even extremism,” Mr Hollande said. He urged Europe to hold firm to its responsibilities as “a space for liberty and democracy” and to resist populist movements.

On trade, the French president said protectionism was not part of “the European genome”.

Weakening Europe is not an option

Mr Trump’s first week as president has been unsettling for many EU leaders. He signed an executive order on Friday limiting immigration and refugees from some mainly Muslim countries.

In talks with Theresa May, the British prime minister, Mr Trump described Brexit as “a wonderful thing” and dismissed the EU as a bureaucratic “consortium”. Earlier in the week, he used his executive powers to withdraw the US from the Trans-Pacific Partnership trade deal.

The US president was scheduled to talk to Mr Hollande in a phone call later on Saturday. Mr Trump was also due to telephone Angela Merkel, the German chancellor, and Vladimir Putin, the Russian president.

At the summit in Lisbon, the leaders of France, Italy, Spain, Greece, Portugal, Cyprus and Malta called for greater economic convergence within the EU to promote growth and employment. 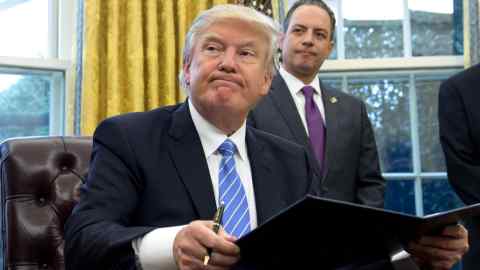 “We believe that in a world confronted with growing uncertainties and instability, we will be stronger by acting together,” they said in a joint statement. “Weakening Europe is not an option.”

The statement added: “We need to develop a robust trade policy based on fair exchange, the promotion of our standards and the safeguarding of our way of life. Protectionist reactions are not the right answer.”

António Costa, Portugal’s Socialist prime minister, urged better co-ordination of EU monetary, fiscal and incentive policies to “reduce imbalances between member states” and to protect the bloc from external shocks. “At a time of great international uncertainty, it is vital that Europe unites more strongly in defence of its beliefs in democracy, freedom and international free trade,” Mr Costa said.

Paolo Gentiloni, the Italian prime minister, said the EU would “find a way to work with the US administration”, but urged the bloc to remain faithful to its core values, including human rights and anti-protectionism.

The summit was the second of what are planned to be regular gatherings of southern Europe’s leaders following an initial meeting in Athens in September.

Some German politicians have voiced concerns that the so-called Club Med group of governments could form a blocking minority within the EU that would seek to obstruct laws and reforms not to their liking.

In their joint statement, the seven leaders said it was a matter of urgency that the EU responded to new challenges in regard to defence and security, a goal that required reforming economic and monetary union so that the eurozone could “fulfil its original role”.