For most Americans, admission to Yale is as unlikely as it is unaffordable, with high academic standards matched by fees of up to $80,000 a year. Yet to one family “client” of Rick Singer, a private operator of “college counselling”, the sticker price was a trifle compared with the $1.2m illicitly offered to ease their child’s entry.

Some question the ethics of the burgeoning US industry of private college counsellors, those advisers paid large sums by wealthy students to coach university choices, tutor for exams and provide feedback on applications to enhance the chances of admission.

As Melissa Korn and Jennifer Levitz describe in Unacceptable, a book as depressing as it is gripping, such questionable but legal activities were only the start. Over the past decade, the US Department of Justice says Singer offered much more to at least 30 wealthy couples, from the actress Felicity Huffman to the corporate attorney Gordon Caplan and to the social impact fund manager Bill McGlashan. McGlashan is fighting the case, pleading that he made a $50,000 donation but paid for “legitimate college counselling” and did not understand that Singer's approach involved bribery.

The broader context awaits a more comprehensive treatment. But so too does the scandal itself: money still trumps merit in US college admissions

As league tables have reinforced the superiority among elite institutions, so competition for places has increased, triggering anxiety for children and insecurities for their parents. The uncertainty of entry through the “front door” allowed Singer to tempt well-heeled clients with an alternative “side door” into Yale, Stanford, Georgetown and the University of Texas, among others.

The University of Southern California — which became his preferred venue — had not always been in such prestigious company. That changed during the tenure of former president Max Nikias, who from 2011 oversaw a plan to boost research and sporting prowess, pivoted around a $6bn fundraising campaign.

This offered a chance to Singer, who recruited sympathetic doctors to diagnose learning disorders to buy students extra time to take college admissions tests, and even paid directly for stand-ins to take their exams. He fabricated claims that applicants were African-American or the first generation in their families to go to college.

As a fiercely competitive former basketball coach, he developed a particular speciality of trading “donations” — sometimes tax-deductible — to college sports in exchange for recommend­ations for entry, based on fabricated claims of applicants’ prowess backed up by false testimonies and images. After admission, students would take “walk-on” roles, sometimes never competing before pleading pressure of work and dropping out of their teams.

Singer proved a canny judge of character, recruiting coaches who felt underpaid and pressured to raise large sums, and identifying rich parents tempted to cross the lines of morality. He played on self-righteous claims that they only wanted the best for their children, often concealing a more selfish desire for bragging rights — or at least an indifference to the perpetuation of inequality.

Parents proved willing to refer Singer to others while remaining discreet about his methods, until investigators stumbled across one scheme during an unrelated probe of one of his clients. “Operation Varsity Blues”, co-ordinated out of the Massachusetts district attorney’s office, spiralled once prosecutors turned to Singer, tapping his phones to gather testimony from others.

The authors highlight that while there is a legitimate case for recognising learning difficulties, most beneficiaries come from affluent neighbourhoods. While sports scholarships can provide a boost for talented children of minorities to enter universities, teams’ ranks are in practice dominated by white students.

They could have made much more of such analysis. Unacceptable reads at times like a rushed attempt to flesh out the colourful indictment and subsequent court reporting, when it could have dug much deeper. There is little on the effects of parents’ cheating on their children, for instance, and the reactions to the scandal of the examiners and the universities get scant treatment.

The legal battles are not over. Several of Singer’s clients contest the accusations. A parallel trial in Massachusetts, now on appeal, rejected claims that Harvard discriminated against Asian Americans to maintain a diverse intake, but revealed the extent to which it granted preferential access to athletes, applicants on the “dean’s interest” list, children of faculty and “legacy candidates” whose alumni parents had given generously.

Some of Singer’s clients — including Huffman and Caplan — pleaded guilty and were convicted for their efforts to buy admission into elite universities through the side door with bribes. Yet others able to donate 10 times more can still legally buy a way in through the “back door”.

The FT ViewThe editorial board
FT View: US college admissions scam tells only half the story 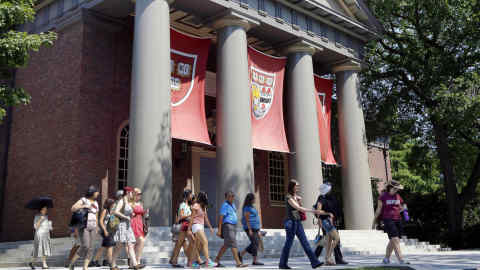 This broader context awaits a more comprehensive treatment than Unacceptable offers. But so too does the wider scandal itself: money still trumps merit in US college admissions.