When Martin Czurda devised a proposal last year to cut the huge pile of non-performing loans held by Greek banks, he was surprised initially to receive a non-committal response from the country’s finance ministry, given Greece’s push to improve its financial position.

“We put forward the idea of an asset protection scheme based on the GACS [state guarantee] model used in Italy. We thought it could be applied successfully to the Greek situation,” says Czurda, a veteran Austrian banker and chief executive of the Hellenic Financial Stability Fund (HFSF), the body established by Greece’s bailout creditors that manages the Greek state’s stakes in the banks.

“My concern was that the pace of eliminating bad loans was too slow and that unless it could be accelerated, the country would be unable to return to sustainable growth,” says Czurda, whose fund is a minority shareholder in the country’s four systemic banks after taking part in three recapitalisations during the financial crisis.

The banks — Piraeus, National Bank of Greece, Alpha Bank and Eurobank — are burdened with €85bn of non-performing exposures, equal to 45 per cent of their loan books and to almost half the country’s forecast gross domestic product for 2019.

They have cut non-performing loans (NPLs) by 21 per cent over the past four years through write-offs and sales of packages of soured loans, but are still struggling to meet rising demand for liquidity as the Greek economy recovers.

An unusually high percentage of NPLs at Greek banks compared with other EU member states hit hard by the financial crisis — Spain’s percentage of NPLs is about 6 per cent — is the result of a long period of inertia by bank boards and regulatory authorities, says Emilios Avgouleas, professor of international banking law and finance at Edinburgh university in the UK.

Close relationships between politicians, bankers and favoured businessmen slowed the process of tackling bad loans, he says, while bankers and politicians were concerned that rigorously pursuing claims against household borrowers and small businesses would deepen the financial crisis.

“This mountain of bad loans is the biggest challenge the banks face. It’s been taking far too long for their balance sheets to be cleaned up, but there’s been sizeable progress recently,” says Nikos Karamouzis, former chairman of Eurobank. 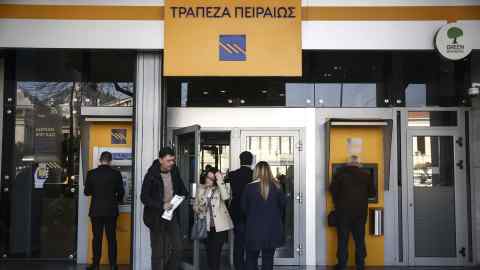 The European Central Bank’s banking watchdog, the Single Supervisory Mechanism (SSM), in March injected a new sense of urgency into the lenders’ effort to reduce their piles of soured loans. Under pressure from the SSM, the banks agreed to slash their bad loan portfolios by more than €60bn by the end of 2021, cutting NPLs to below 20 per cent. The ECB watchdog has kept the banks under close scrutiny even though Athens last year finished its third international bailout and has resumed borrowing on the international capital markets.

“The SSM is the key player behind the recent push to cleanse the banks’ balance sheets,” says Avgouleas. “It’s already provided the impetus [for a clean-up] by ensuring members of Greek bank boards were replaced with more dynamic and energetic executive and non-executive directors,” he says.

Two plans to further reduce NPLs could be a catalyst for banks to achieve the ambitious targets set by the SSM. But both still have to be approved by the EU’s competition directorate. One is a new version of the original HSFS plan presented last year. The finance ministry appointed JPMorgan Chase to complete the proposal, which was loosely modelled on the US bank’s rescue of Italy’s Banca Monte dei Paschi di Siena.

The scheme calls for transferring bad loans to a special-purpose vehicle and securitising them using a state guarantee for the senior tranches. An amount of €5bn in state guarantees would suffice to remove €15bn-€17bn from the banks’ balance sheets, says Czurda.

The second plan, devised by the Greek central bank, could wipe as much as €38bn off the NPL pile and would not require additional state funding. The banks would transfer €7bn of deferred tax assets to a special-purpose vehicle, which would then issue bonds and use the proceeds to acquire NPLs held by the banks. Deferred tax assets were granted to the banks to offset losses suffered during a restructuring of Greek government debt in 2012. They comprise some 60 per cent of the capital at the country’s banks. The competition directorate must decide whether the tax credits could be considered as illegal state aid if they were transferred to a separate unit selling bonds.

“We argue that no state aid is involved as the bonds would be sold at market prices,” says Yannis Stournaras, governor of the central bank, adding that investors “responded enthusiastically” to the scheme at roadshows held by the Bank of Greece in London and New York. Rothschild is advising the central bank.

“It’s not an unusual solution — Portugal, Spain and Italy have all used deferred tax assets for securitisations,” says Stournaras. He notes that the scheme, if successful, would reduce the NPL stock by almost 50 per cent and cut the contribution of deferred tax assets to the banks’ regulatory capital to 30 per cent. “At the end of the process, we would have profitable and much healthier banks with fewer provisions that would qualify for investment grade ratings. They would also have unloaded most of the deferred tax assets, which are not the best quality form of capital.”

If all goes to plan, the finance ministry would launch the first bond issue at the end of 2019, followed a few months later by the central bank. Greek bankers have welcomed both schemes as a useful extra weapon in the battle to reduce their NPL percentages to low single digits in line with the EU average.

“I can see light at the end of the NPL tunnel,” says Christos Megalou, chief executive of Piraeus Bank, the largest Greek lender. “We think both plans are good: they’re complementary and cater to different segments of the market. We’d use them alongside our other NPL-reduction projects.”

Piraeus reported the sector’s highest percentage of non-performing exposures at 49 per cent of its loan book in December, compared with 48 per cent for Alpha Bank, 41 per cent for National Bank of Greece and 37 per cent for Eurobank. In the meantime, the banks will continue selling and writing off soured loans. All the banks are expected to sell packages of secured corporate loans this year.

Eurobank, the third-largest lender by assets, has made the most progress, thanks to a €780m EU-approved takeover of Grivalia Properties, a Greek real estate fund that gave the bank’s capital base a significant boost.

The merged company plans to securitise about €7bn of bad loans, which would be transferred to a special-purpose vehicle that would issue senior, mezzanine and junior notes. Eurobank hopes to cut NPLs to 15 per cent by the end of 2019 and to single digits by 2021.

Yet the struggle to make the banks investible again is far from over. The SSM will continue to keep a close watch on progress as part of an “enhanced surveillance” programme agreed with the EU after Greece emerged from its third bailout last August.

“The Greek banks have a good chance of becoming attractive and viable business propositions, provided that co-ordination among the key stakeholders — the European institutions, the Greek authorities, bank boards and private investors — is reinforced,” says Avgouleas.

Get alerts on European banks when a new story is published 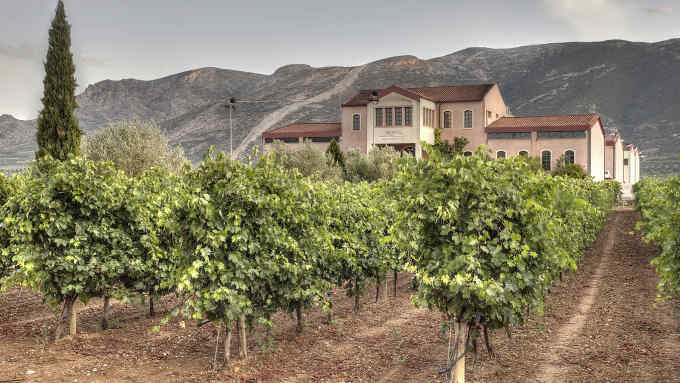