Is India following the example of Myanmar, which is now battling genocide accusations at the International Court of Justice over the crackdown on the country’s Rohingya Muslim minority?

This month, India’s parliament approved new citizenship rules that redefine the nation — a pluralistic secular democracy with a sizeable Muslim minority — as a natural homeland for Hindus and adherents of other “Indic” faiths, from which Islam is pointedly excluded.

Hindus, Sikhs, Jains, Buddhists, Parsees and Christians that came to India from nearby Muslim-majority states — Pakistan, Bangladesh and Afghanistan — prior to December 2014 will now be offered a fast track to citizenship, the first time India has incorporated religious criteria into its naturalisation or refugee policies.

Prime Minister Narendra Modi’s government says the rules are an innocuous, humane effort to end the legal limbo of religious minorities that have looked to India for refuge from Muslim persecution, the unfinished business of the traumatic 1947 partition of the Indian subcontinent.

“It’s their natural home,” says MP Swapan Dasgupta, who supported the bill. “These people look at India as ‘mother India’.”

But critics see the bill as breaking with Mahatma Gandhi’s inclusive vision of India as a home for people of all faiths, and signalling to India’s 200m Muslims that they do not fully belong.

“The danger is you essentially create a two-tier structure of citizenship with a privileged community and a marginalised community that feels they are members of a permanent underclass,” says Milan Vaishnav, of the Carnegie Endowment for International peace.

It sounds familiar: Back in 1982, Myanmar adopted a citizenship law recognising eight ethnic groups as “national races”, whose members were entitled to citizenship. But Rohingya — a mostly-Muslim population reviled by Burmese as illegal migrants from Bangladesh — were excluded. They instead needed “conclusive evidence” that their ancestors had lived in Burma prior to its 1948 independence — impossible for most to provide.

Rohingya remained in Myanmar despite tight restrictions on their movement, education, employment and marriage. Decades of persecution culminated in the mass expulsion of 700,000 Rohingya into neighbouring Bangladesh in 2017.

The context for the Indian bill has also raised alarms. The government — which claims India is being swamped by illegal Muslim migrants from Bangladesh — is gearing up for a massive national exercise to assess which of India’s 1.3bn residents is eligible for citizenship.

Echoing demands once made on Rohingya, Indians are expected to have to prove their ancestors were resident in India in the first years after independence — or face the prospect of being declared illegal migrants, liable to detention and deportation. 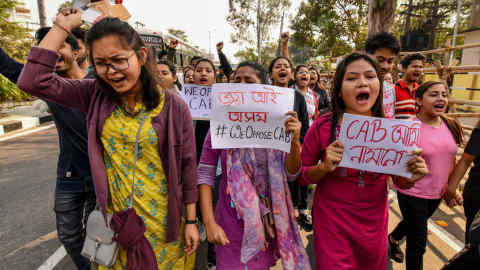 Yet Hindus and other groups now deemed refugees by the new rules will be protected. The spectre of statelessness falls therefore mainly on Muslims.

“For the first time in its history, India is going to make a distinction between citizens and non-citizens,” says Yale professor Jason Stanley, author of the book How Fascism Works. “If you are non-Muslim, there is a now rapid path to citizenship. But millions of Muslim residents of India — whose families have lived there forever — are going to be deemed illegal immigrants.”

What fate awaits those whose citizenship cannot be verified is unclear. Amit Shah, the home minister, has repeatedly vowed to deport those he calls “infiltrators” and “termites”. But there is little likelihood of any other country accepting them, and India is now building detention centres to hold those stateless foreigners.

Yet Meenakshi Ganguly, south Asia director of Human Rights Watch, questions whether India can even afford to detain huge numbers who are likely to fail to meet the citizenship criteria.

“Are you going to take them out from sustainable livelihood and have the state feed them? Are there going to be slave camps,” she asked. “It’s very hard to understand what the plan is. But millions and millions of Muslims are feeling extremely insecure.”