A Sino-American agreement is welcome but much is still unresolved

Jaw-jaw is better than war-war. These words, falsely attributed to Winston Churchill, give the right response to the announcement of an agreement on 10 initial points in the “US-China comprehensive economic dialogue.” The fact that this limited agreement is being hailed by the Trump administration gives us reason to hope that the risk of trade conflict is falling.

The points announced on May 11 are in themselves modest. It is, in any case, inconceivable that any deal could eliminate the US trade deficit with China, which exceeded $300bn in 2015. But the fact that the two superpowers are talking is a good sign. That Donald Trump is willing to call Xi Jinping, his Chinese counterpart, “a great guy” reinforces the optimism.

So what has been agreed?

China has agreed to allow imports of US beef by July 16. Its national biosafety committee is to hold a meeting by the end of May, to evaluate the safety of all of the eight pending US bio-technology applications. The Chinese are committed to letting foreign-owned financial service businesses provide credit rating services on their soil, too. China is also to allow US-owned suppliers of electronic payment services to begin its licensing process. Finally, China is to issue bond underwriting licences to two US financial institutions by July 16.

In turn, the US is committed to supplying liquid natural gas to China. The two countries also agree to resolve issues affecting the export of cooked poultry from China. The US consents to apply the same prudential standards to Chinese banking institutions as to other foreign institutions. The US Commodity Futures Trading Commission intends to extend the current “no-action relief” to the Shanghai clearing house for six months, with further extensions for up to three years. The US will in addition send delegates to the “Belt and Road Forum” in Beijing this month. Not least, the US states that it “welcomes direct investment by Chinese entrepreneurs as it does by entrepreneurs from other countries”.

What is noteworthy about these decisions is that they fit well into the template of past trade agreements: they contain no numerical targets for exports or imports, for example. Also noteworthy is that both sides have offered concessions. In all, this looks like a fairly traditional trade negotiation. 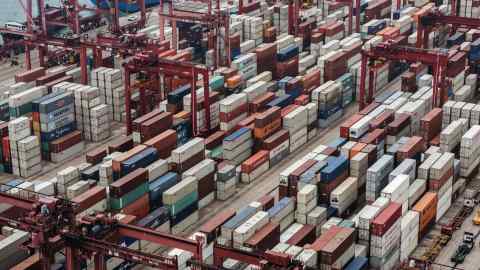 So what of the future? This agreement is intended to be the first fruit of a 100-day action plan. Let us see what follows. Moreover, what will happen if, as seems probable, the agreements ultimately reached do not change the US-China bilateral trade imbalance significantly? Will Mr Trump be content or will he reignite his complaints all over again?

Two further issues arise. The first is whether this process will succeed in opening China’s economy. Chinese policies aim to promote national champions. They raise obstacles to foreign-owned businesses, be they located abroad or inside China. Complaints from foreign businesses are legion. The China-US dialogue is an opportunity to address these concerns. China may be a developing country. But it is also a superpower. If it genuinely wishes to preserve an open world economy, it will have to tailor its behaviour to foreign concerns. This also applies to how it manages its economy, currency, financial system and balance of payments.

The question here is how far the “America first” orientation of this administration will address such issues. This links to a second and still broader issue. It will be very worrying to the rest of the world if the future of global trade is largely hammered out in bilateral discussions between the two superpowers. A way needs to be found to expand these discussions to include the concerns — and address the interests — of others. The US may not be interested in this. But, as a global leader, it should be.

Right now it looks as though talk is replacing conflict. We should be happy about this, even if results prove modest.

Get alerts on Audio articles when a new story is published