Object & Thing: an art fair in a jewel of modernist design

When Gerald Luss designed a house for his family in 1955 — at Ossining, 45 minutes from New York up the Hudson River — he wanted its occupants to feel like they were floating in the trees. He certainly got it right. To be inside its glass-walled sitting room is to be at one with nature.

Luss lived here for three years with his family. At the time he was designing the interiors of the Time-Life Building in New York, made famous nearly 50 years later when they were painstakingly recreated for the TV series Mad Men. Time-Life executives regularly travelled to the house for design meetings and there are parallels between this expansive family home and those trailblazing office interiors: floor-to-ceiling windows, coloured panelling, beautiful woods like teak and macassar, and an ethos that puts the user at the very centre of the design.

Luss’s then-wife found Ossining too remote, and they soon moved back to the city. Recently Luss has been back at the house, participating in the installation of the latest edition of Object & Thing, a design and art fair, teamed with the contemporary art galleries Blum and Poe and Mendes Wood DM. Set on subverting the usual art fair conditions of isolated booths, the first edition took place in May 2019 at 99 Scott, a warehouse in Brooklyn, where artworks and objects were displayed on plinths and tables according to aesthetics rather than gallery provenance.

Since the pandemic, the platform’s founder Abby Bangser (a former artistic director of Frieze Art Fairs) has moved the proceedings into domestic settings, taking over the high-modernist Noyes House in New Canaan last autumn, and now Luss’s former home. “It makes sense to be in a house with a small group of people, so it’s partly a response to the present conditions, and working with small groups of visitors,” says Bangser. “But also, this is how people live in their homes, with art and artefacts around them.” The current owners — actor-director Rick Rodgers and Maureen Flaherty — have removed all their possessions for the run of the exhibition; Luss has reinstated a few of his.

“Having Gerald as an active collaborator is just extraordinary,” says Bangser of the 94-year-old, who still designs — mostly Plexiglas clocks — in his basement studio at the Dakota building in Manhattan where he lives. “He’s so fit and energetic, you could imagine him running a marathon.” Luss’s designs at the house include a 12-ft long sofa, with blue upholstery on a wooden frame, and a glass coffee table, which Bangser is using to display some of the new works for sale. These include wood-fired ceramic vases by the ceramicist and gardener Frances Palmer which are carefully designed to work perfectly with flowers, and tableware by Johnny Ortiz, a potter and chef who grew up on the Taos Pueblo, a Native American community in New Mexico, and follows the local ceramic tradition using the region’s unique, mica-rich clay and firing work at the full moon to give it cosmic energy.

Elsewhere in the house visitors will find textile wall-hangings by Kiva Motnyk — hand-dyed and mixed with vintage fabrics from India and Japan — slung over beds, while a painting by the British artist Cecily Brown hangs over the fireplace and a huge pink marble dish by the sculptor Alma Allen sits on the kitchen patio. Glassware by Ritsue Mishima shimmers on a shelf that runs along a window. “That’s something you could never achieve in a booth at a fair,” says Bangser, “showing work in natural light.”

Aaron Aujla and Ben Bloomstein of Green River Project have also been spending time with the indefatigable Luss. The pair trained as and worked with artists — Nate Lowman and Robert Gober respectively — for a number of years before establishing their own company in 2017 to make furniture which pays homage to design’s past. Look carefully and you will see references to Gerrit Rietveld, Le Corbusier, or Frank Lloyd Wright. “We came into the art world in 2011, and it was the height of its expansion, when emerging artists careers were being hugely manipulated by galleries,” says Aujla over the phone from their workshop in Bed-Stuy. “We knew we didn’t want to be waiting in the studio for our dealer to call, and we did enjoy building our own studio every time we had to move, which was often.” The pair started to make functional pieces. “Now most of our collectors are people who we know from the art world, and who now want a coffee table,” says Aujla.

Aujla and Bloomstein already knew about Luss and the Time-Life building when they went to visit him at his home in Manhattan early this year. The designer inspired a new series of aluminium pieces, including a 4ft-diameter round table now sitting in the reception hall of the house in Ossining (a Matt Connors painting hangs nearby). It’s three legs represent the top of the Time-Life building which, according to Aujla, “was cut by hand by Ben’s brother Nick, so it has a wobbly edge. It’s organic.” A day bed, also hand cut, has aluminium slats beneath its upholstered cushions. “Once we’d met Gerald, we really wanted to play with the materials of late modernism, and the societal changes they imply,” says Aujla. Wall sconces are made from a combination of aluminium sheet and bamboo.

The Gerald Luss House has gone through various owners and occasional changes. The floor, once cork, is now mostly terrazzo. Bangser, herself a fan of modernism (her own home is a modernist one in Connecticut) has been helping the current owners restore certain features (painting the beams grey) and replant the gardens. Now, by filling the house with contemporary art and design, she’s also demonstrating what a fabulous backdrop Luss created for works of any period.

‘At the Luss House’ is open from May 7 to July 24 by appointment only. object-thing.com

Explore the series
READ MORE
The power of seeing 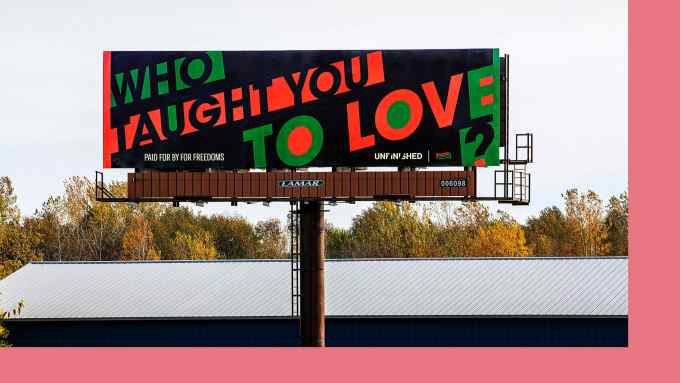