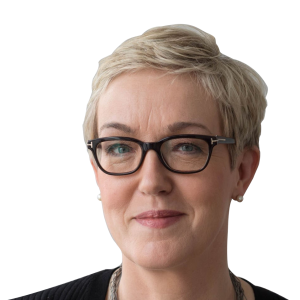 Britons may not be aware of this, but there is a generation of Germans who revere their unique style of humour. A non-trivial number of us — I swear it is not just me — can recite entire episodes of Yes, Minister or Blackadder.

We do not even need words to evoke the scene in Fawlty Towers in which Basil cautions Polly, the waitress: “Don’t mention the war”, and then does just that in front of some bewildered German guests. Two fingers held over the upper lip, in the manner of John Cleese, is all it takes to set us off cackling like idiots.

The reason we fell in love with the British brand of funniness is not that Germans cannot make jokes, although we are aware this is a popular view on the other side of the English Channel. That is partly our fault, because we make them in German. But Brits who have bothered to learn our language can attest that we are capable — if pressed we might even say “ve haf vays” — of being funny deliberately.

The wit, ruthless skewering of authority and fine appreciation of the absurd that characterises the best of British humour was a bracing breath of fresh air to Germans who grew up in the long shadow of the second world war and the Holocaust. Making a full and honest accounting of German guilt took several decades of anguished, lacerating self-examination (plus a couple of well-placed kicks from outside). It got done in the end. But its unpleasant downside was narcissism and hypocrisy: a tendency to wallow lugubriously in the past while cannily avoiding responsibility for the present.

British humour — or so it seemed to many of us — stood for the exact opposite: a large and liberal view of Europe and the world, in which Britain claimed a special stewardship for freedom of trade and the safety of the global order. We marvelled at a country that had the maturity to laugh generously at itself, and then calmly rolled up its sleeves and set things to rights. Someone who knows what is funny can usually be trusted to know what is not.

But now there is Boris Johnson. The former mayor of London, chief Conservative Brexiter, pretender to the mantle of Winston Churchill and the post of premier seems to believe lobbing insults at foreign leaders who disagree with him is the nuclear option in his arsenal.

First, Mr Johnson suggested that President Obama’s African roots explained his scathing critique of the Leave campaign. Next, he accused the EU (for which read the Germans) of aspiring to Hitler-style hegemony. And this week, The Spectator magazine declared him the winner of its “President Erdogan Offensive Poetry competition”.

There are many excellent reasons for criticising the EU and the Germans, but playing the Nazi card is just feeble — it is no more than an ingratiating lunge at the punters. And for a self-styled Churchillian to insinuate that Mr Obama’s “part-Kenyan” heritage makes him anti-British suggests a surprising degree of uncertainty about Britain’s relationship with its former colonies and present Commonwealth partners. The same Commonwealth partners who, in the vision of the Leave campaign, are to replace the EU as the UK’s main trade allies.

A red-blooded Briton bent on restoring sovereignty to his sceptred isle could not let the now-infamous Jan Böhmermann (a German comedian who is being sued by Mr Erdogan) have the last word on offending a Turkish leader. Mr Johnson’s political idol, Churchill, received his Nobel Prize for services to literature; it is underwhelming to see that his admirer, an Oxford-trained classicist, should be rewarded for rhyming “Ankara” with “wankerer” and “wild oats” with “goat”.

Clearly, Mr Johnson, like his American counterpart Donald Trump, is a raging narcissist, with rampant insecurities. That is disturbing enough. But funny?

The writer is a senior fellow at the Brookings Institution