“Women tend to do a better job,” said Ms Lagarde. “It’s quite fascinating actually, when you look at those countries that were led by women and the path they took and the policies they adopted and the communication style that was in play was quite stunning.”

Speaking on a video interview with the Washington Post on Wednesday, Ms Lagarde praised the way that German chancellor Angela Merkel had handled the pandemic, breaking with the tradition that the ECB president avoids singling out particular countries or leaders.

“When I look at what Chancellor Merkel has done here, she very, very transparently shared data, numbers, casualties and rate of contamination and so on,” said the ECB president, after saying that she was speaking in a personal capacity rather than as a central banker.

“It became very quickly a sort of common lingua franca, common knowledge that people would understand those scientific elements [and] that enabled them to appreciate why certain measures were necessary, such as masks, such as being confined, such as keeping social distances,” she added.

Ms Lagarde, who was appointed to the ECB last year in a deal struck by the German chancellor, said women leaders were better at expressing the “caring dimension” and “that was something that was considered by viewers and voters as well as authentic”.

“I was also thinking of those other leaders around the world — you look at the leader in Taiwan, in Belgium in New Zealand — many of those leaders, prime ministers or presidents have also communicated well and carried the water of bad news as well as the water of clear explanation and strong recommendations.” 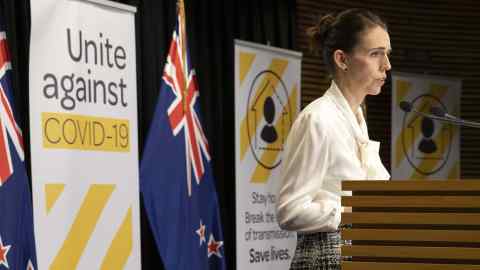 Asked whether she feared that the eurozone could suffer a double-dip recession, Ms Lagarde said this was unlikely unless there was a major second wave of coronavirus infections that forced national lockdowns to be reimposed.

She added that the recovery would be “uneven” and that data so far indicated that the ECB’s baseline projection for a record 8.7 per cent decline in the eurozone economy this year, before a rebound with growth of 5.2 per cent next year, was “probably in the right place”.

Addressing this week’s agreement between EU leaders on the €750bn recovery fund to support the countries hardest hit by the pandemic, Ms Lagarde said that it “could have been better” if the proportion of the fund which was used to make grants rather loans had been higher, as initially planned. But she said it was still “a very ambitious project”.

“This is clearly a demonstration of solidarity, of transfer to those that need it most and it is the first time that there is such joint borrowing [by the EU] of that magnitude,” she said. “It’s a breakthrough in a time of shock when the economy is massively, brutally affected.”

Women leaders shine in an age of health crises / From Howard Weinberg, New York, NY, US