Seaweed diets, anti-methane vaccines and selective breeding are being tested as ways to lower the methane emissions produced by dairy and beef farming, as farmers face increasing pressure to tackle climate change.

Livestock belch out about 5 per cent of greenhouse gases that emanate from the activities of humans worldwide, or five times Australia’s total emissions. While the microbes in a cow’s gut are uniquely efficient at grinding grass and grains into protein, the fermentation process is a powerful producer of methane, a potent greenhouse gas that traps nearly 30 times more heat than carbon dioxide.

There are plenty of ideas for how to decrease the burps and farts coming from cattle and sheep, although many are experimental and years away from being available on the market. Farmers are already trying to get more milk and beef from fewer cows, and to better manage the manure, which releases methane when decomposing.

Still, it is tougher to slash emissions from farming than, say, dirty power plants, says Jannes Maes, a Belgian dairy farmer and president of the European Council of Young Farmers.

Whereas energy, manufacturing and other polluting industries are dominated by corporations, agriculture is largely made up of small family businesses. While most industries can introduce zero-emissions and renewable technology — even if at some expense — reductions from livestock can only go so far. “We can try to be as efficient and as low-emissions as possible with our cows. But as long as we want an animal-based diet, which I don’t think we can question, we will have those emissions,” Mr Maes says.

That said, scientific leaps suggest it is possible to make significant cuts.

Seaweed looks particularly promising. Mixed into feed, it blocks the methane from forming during the animal’s digestion. Early experiments in Australia and California reduced emissions by more than 85 per cent in sheep and as much as 50 per cent in dairy cows. Scientists are now testing it on beef cows, which produce the most methane.

Farmers like the seaweed because it is natural. Even the ancient Greeks took their cattle to eat algae on the beach to give them vitamins and nutrients. For those who feed their livestock in yards, rather than just grassy pastures, it is also the simplest way to target each animal, says Rob Kinley, lead scientist on the study run by Australia’s Commonwealth Scientific and Industrial Research Organisation.

However, it is still far from becoming commercially available or attractive. For one, the type of seaweed being tested — Asparagopsis — is rarely farmed. For another, farmers will want to be sure there is a value in buying it.

“They’re already back against the wall in terms of their margins for the effort they put in,” says Mr Kinley, whose research is backed by Australia’s meat and livestock industry group. “If you say ‘you have to use this seaweed’, that’s just a flat-out expense. What they need is to have an identification of a return.”

Another feed additive could hit the European market within a year. Dutch health company DSM created the methane-inhibiting molecule known as 3-NOP, and says it could slice a cattle herd’s emissions by a third.

Further down the line, genetics may provide a solution. Researchers in New Zealand are collecting genetic data on the microbes that live in cow and sheep stomachs. With those genome sequences, they hope to pinpoint the best way to reduce the microbes’ methane production.

If you say ‘you have to use this seaweed’, that’s just a flat-out expense. What they need is to have an identification of a return

Meanwhile, farmers are already tackling pollution simply by managing their operations more efficiently. In the US, they produce the same amount of beef with 33 per cent fewer animals compared to 1977, according to Ashley McDonald, senior director of sustainability at the National Cattlemen’s Beef Association.

Nonetheless, emissions from large farming countries continue to rise. New Zealand’s agricultural emissions grew by 12 per cent between 1990 and 2016, as the dairy herd nearly doubled. Ireland’s emissions are also inching up, driven by the country’s fast-growing dairy industry.

Taxes and credits against methane could boost the uptake of emission-cutting tools such as the seaweed additive. New Zealand is thinking about setting a price on agricultural emissions, making it the first in the world to use a measure already imposed on carbon emissions from energy, manufacturing, airlines and other industries.

Farmers broadly support measures that would make it cheaper to shrink their climate change footprint — only as long as it applies worldwide. If emissions are taxed in one country but not another, the eco-friendlier farms will lose out, they argue.

“It will only work if everyone in the world agreed to do it — charge the same sort of price — and that’s unlikely to happen,” says Andrew Hoggard, a dairy farmer and national vice-president of the Federated Farmers of New Zealand. “The end result would be more expensive food.” 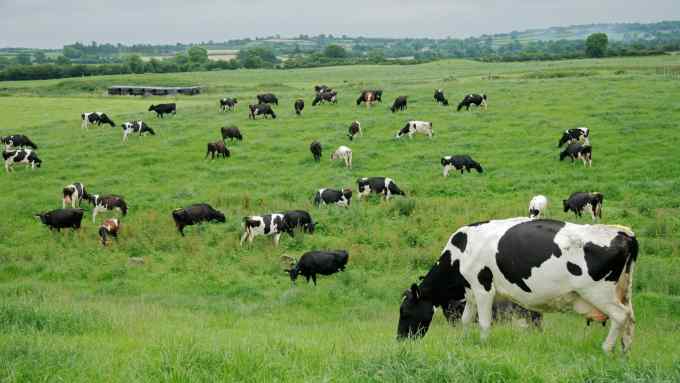