There are now more than 340,000 wind turbines spinning around the world and to the casual observer, they look much the same as ever. Yet appearances are deceptive. Thanks to a series of little-recognised technological advances, wind power has become far more cost-effective and prevalent than expected.

It accounted for close to 40 per cent of Denmark’s electricity mix in 2016 and about 10 per cent across the EU.

Wind farms were the leading source of new electricity generating capacity in Europe, the US and Canada in 2015, and the second largest in China.

Despite this, less than 4 per cent of the world’s electricity came from the wind in 2015. That is nowhere near enough to help shift the global economy away from the climate-warming fossil fuels that still supply most of the world’s energy.

The wind industry acknowledges more technical advances are needed. These are the main features of the emerging new technology:

The generating capacity of the turbines in many early wind farms 25 years ago was measured in kilowatts and produced only enough power for a handful of average-sized homes in a country such as the US.

Today they have been supplanted by far more powerful turbines that can each supply hundreds of homes.

As farms have spread from land to sea, where wind speeds are stronger and squabbles over blocked views less likely, turbines have mushroomed to once unimaginable sizes.

The 9.5MW monster launched this year by Denmark’s MHI Vestas, the world’s largest turbine maker, can power more than 8,000 homes with blades that sweep an area larger than the London Eye.

This means more electricity can be generated from fewer turbines that cost less to install and maintain than a cluster of smaller machines, says Matthew Wright, UK managing director for Denmark’s Orsted, the world’s largest operators of offshore wind farms.

“It’s a genuine economy of scale where, for a doubling of the size of the turbine, for the equivalent megawatt capacity you are close to halving the cost,” he says. “It’s an appreciable difference.”

By 2024, even larger turbines with a capacity of up to 15MW should be available, says Giles Dickson, chief executive of the WindEurope trade body.

“That’s a significant turn of events,” he says, noting Orsted said this year it would build offshore wind farms in the German North Sea by 2024 with zero subsidies.

This is a progress for an industry that has relied heavily on public support and one reason industry experts think as much as 30 per cent of Europe’s electricity could come from wind power by 2030, up from 10.4 per cent in 2016.

Offshore wind power costs have already plummeted in the last three years in the UK, an offshore wind superpower thanks to its huge coastline and relatively shallow seas.

This is no use, however, for countries surrounded by very deep waters. Today’s turbines are hammered into the seabed and that is tricky in a country such as Japan, which lies on a continental shelf that quickly drops to depths that make offshore wind farms financially unfeasible.

Japan is one of several countries testing floating turbines to get around the problem, despite widespread scepticism that they would ever work.

This year, however, Siemens turbines are being installed by the Norwegian oil group, Statoil, in what has been billed as the world’s first floating offshore wind farm, off the east coast of Scotland.

The floating systems are far more expensive than stationary ones today but costs should fall as more are installed.

One reason wind farms do not supply as much electricity as older power stations is that they do not work on still days.

Larger rotors that can capture more wind energy and other advances in turbine technology have already led to higher capacity factors — the amount of electricity a power plant actually produces compared with what it could generate running at full capacity.

“Nowadays it is the norm in the large US Midwest market for projects to have capacity factors above 50 per cent, something that was unheard of 10 years ago,” says energy specialist, Ben Backwell of FTI Consulting.

Renewable energy advocates have long sought ways to boost that number further by storing power generated on windy, sunny days so it can be released in still or dark circumstances. The high cost of common storage technologies, such as lithium-ion batteries, is a hurdle. Prices are falling, however and some companies are looking at ways to hook up turbines to batteries.

In the US, the Deepwater Wind company plans to pair a wind farm off the coast of Massachusetts with a Tesla battery system. The world’s biggest lithium battery device — installed in South Australia this year by Tesla’s Elon Musk — is connected to a wind farm, though its job is to inject power rapidly to help keep the grid stable.

Such schemes may eventually pave the way for much wider use of storage.

Wind turbine technology may have advanced but some companies, including Google parent Alphabet, are testing bolder ideas, such as airborne generating technology.

In Scotland, the Kite Power Systems company has secured more than £5m of investment from groups including Shell Technology Ventures for its plan to fly two kites as high as 1,500 feet attached by tethers to a winch system that generates electricity as it spools out. The company claims the technology could transform the offshore wind industry because it would be cheaper to make, build and install than turbines.

Many wind industry engineers say kite power is decades from commercial operation. Yet it was not that long ago that the idea of 9MW turbines and floating wind farms also seemed a distant prospect. 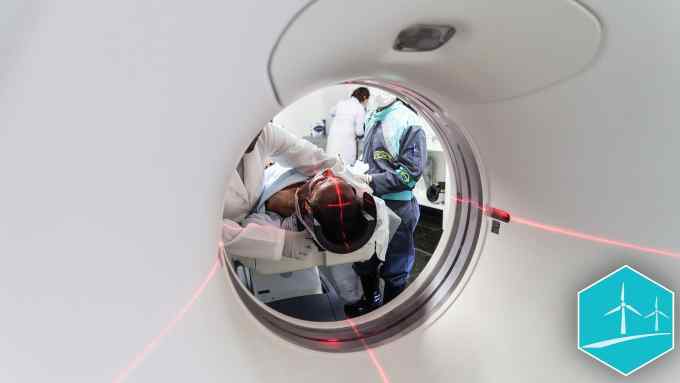