The Cause: the rescue dogs teaching children to be kind

As a child, the British florist Nikki Tibbles would often be found sleeping in the dog’s bed, so deep was her affection for the family hound. Today she owns four rescues – Lenny, Ronnie, Ruby and Rita – and presides over the Wild At Heart Foundation, a global charity working to reduce the world’s 600m stray-dog population through rescue, adoption and sterilisation. At the heart of the foundation is a mission to educate people on how to care for animals, a pledge she’s put to work with her latest project: the Be Kind programme for schoolchildren.

Available for free from September, Tibbles’ new curriculum is the result of an ongoing partnership with Manolo Blahnik: the project is being funded by the shoe brand, and CEO – and owner of pet Schnauzer Poppins – Kristina Blahnik is working closely on the project. Like Tibbles, Blahnik grew up around dogs, and Manolo himself has 10 rescues at his home in the Canary Islands. “He’s always said that he gets on better with dogs than he does humans,” says Kristina of her uncle, the unfailingly sociable Spanish-born designer, who is now 78 years old.

By teaching children how to interact with dogs, Blahnik and Tibbles hope to inspire kindness, compassion and understanding. Comprising 10 hours of lessons, the programme is an extension of the foundation’s work around the world to foster respect for dogs. “Where before these dogs might be kicked or mistreated, they’ve now become loved pets,” says Blahnik, “and that has also brought communities together.”

Five workbooks follow a fictional rescue called Lucky, who teaches students how to recognise his emotions – happy, relaxed, angry or scared. Teachers then use those feelings as a springboard to ask how their students might react in similar situations. “If children are struggling to communicate how they are feeling, we believe this will help,” says Tibbles. “And then they can recognise these emotions not only in themselves but in all living beings. This isn’t just about taking dogs into schools for children to pat in assembly – this is real and life-changing. You educate one child and you reach seven adults.”

Health and wellbeing: six ways to get back to nature
The Cause: Sugi’s ‘forests of healing and learning’ 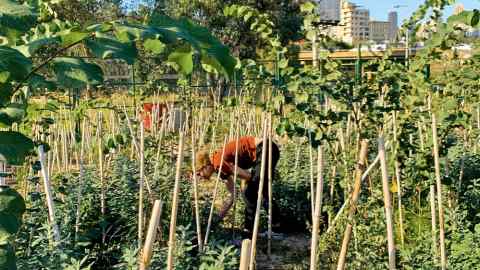 Although linked to the national curriculum, Be Kind is a voluntary programme for primary-school pupils, with most teachers opting to deliver lessons during PSHE (personal, social, health and economic classes). But the hope is for it to go further than that. “We want this to be part of every school’s curriculum,” says Tibbles, who is currently working on adapting the programme to suit secondary schools.

“It’s creating a kinder world,” says Blahnik. “If we can even make one child help another child or talk about how they’re feeling when they wouldn’t have done so before, then that is a success.”