Mehreen Khan in London, Pavlos Papadopoulos in Athens and Jim Brunsden in Brussels

Brussels has formally concluded that Greece has succeeded in repairing its public finances, a move that puts France at risk of becoming the only country still in breach of eurozone budgetary rules.

The European Commission said on Wednesday that after seven years of bailouts Athens’ budget deficit is now within agreed EU limits. It recommended the closure of the excessive deficit procedure opened when Greece plunged into its sovereign debt crisis in 2009.

The office of Alexis Tsipras, Greece’s prime minister, hailed the news as further confirmation that “the Greek economy is returning steadily to European normality.” It added: “The government is studiously continuing on the course for a final exit from the economic adjustment programme in August 2018.”

The commission decision, set to be signed off by national governments in the coming weeks, will leave France and Spain as the only countries in the euro area subject to the excessive deficit procedure, under which nations agree targets with EU authorities for repairing their finances.

While Spain is on course to fall under EU’s 3 per cent deficit ceiling next year, France’s prospects are less clear.

The country’s state auditor has forecast that the French deficit will be stuck at 3.2 per cent this year and next unless the country makes €8bn of spending cuts or tax rises.

Paris has repeatedly missed targets agreed with the commission for bringing its deficit within the 3 per cent limit.

Simon Kuper
How Greeks have adjusted to the forever crisis 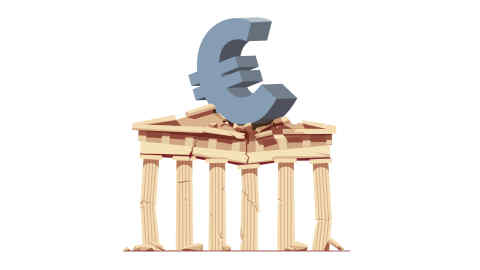 Edouard Philippe, French prime minister, told the Financial Times this week that some flagship tax cuts for businesses and households could be pushed back to 2019 to plug the budget black hole. However, some tax cuts for the wealthy and investors will kick in as soon as next year.

Mr Philippe also told Les Echos newspaper this week that the government would aim for a deficit of 2.7 per cent in 2018.

Asked about France’s budgetary situation, Pierre Moscovici, said on Wednesday that the country had “repeatedly committed” to complying with the 3 per cent rule in 2017 and that the target was “within reach.”

“I have confidence in the French authorities to stick to this commitment,” he said.

Mr Moscovici added that Wednesday’s decision on Greece was a symbolic moment “turning the page” from a tumultuous era in which the country endured the worst depression of any European nation in modern times.

He also said Greece’s exit from the excessive deficit procedure was good news for the eurozone as a whole. “2018 should be the year where finally all euro area countries without exception should be below 3 per cent,” he added.

Mr Moscovici said the commission’s decision, combined with the recent release of an €8.5bn tranche of bailout aid for Greece, was likely to send a strong signal to investors as the country plans its return to the markets.

“Obviously this is the next step,” he said. “This signal is clear . . . that Greece has fulfilled its commitments.”

Yannis Stournaras, the governor of the Bank of Greece, said the commission recommendation marked “the beginning of a new era for the economy of Greece based on sound fundamentals.”

The commission’s move contrasted with previous clashes between Athens and other EU governments — some as recent as two years ago, when Greece imposed stringent capital controls and citizens rushed to get money out of the country.

However, the Greek economy remains afflicted by many problems, with the IMF concerned that t the country’s debts are still not sustainable and youth unemployment remaining at very high levels.