Does the Belgian designer’s duchess satin jackets mean return of tailoring for men?

“We need a new outline,” said Raf Simons, after his spring/summer 19 show that had focused on large, loose tailoring in women’s couture cloths. “Too many hoodies with prints.” It was his first show in Paris for two years, having decamped his own-label show to New York while he found his feet in his job as creative director of Calvin Klein. Only this show wasn’t in Paris, but in a club in the suburb of Montreuil, a 50-minute metro journey and walk away. It was 10.30pm.

This was fashion as a cultural studies class. Simons was focusing on the specific moment when punk became new wave. “I wanted to do it in a way where you didn’t get the typical ingredients,” he said. “No safety pins or studs. No black leather.” On the soundtrack was “Bela Lugosi is Dead” by Bauhaus. The band’s look was graphic and austere, like the chaos of punk had been washed away.

A model came out in a knee-length white duchess satin coat, its shoulders wider than his body. On its back was a grid of silver balls, which Simons said was inspired by Jean Royere, one of his favourite furniture designers. It set the look for the show.

He was inspired by the enlightened colour combinations of Yves Saint Laurent; a long green duchess satin coat was worn over a hot pink roll neck. Another clashed yellow with pink. Some black coats had diagonal zips from which emerged vivid silk scarves. These wrapped around the neck before attaching into a zip at the back.

T-shirts had been turned 90 degrees, a sleeve removed to make the hole for the head. They were printed with archive images of New Wave kids from late ’70s/early ’80s London. Knits had extra neck holes. Models carried six-packs of beer to signify delinquency. Yet the collection felt elevated from the urgent adolescent air his shows once had.

Maybe it’s age — Simons is 50. Maybe it’s because, in the two years since Simons last showed in Paris, his role in fashion has changed. At Calvin Klein, Simons is now part of the establishment, responsible for every creative aspect of a brand which announced fourth-quarter revenues of $977m. The core of that business is jeans and underwear (see the recent ad campaign starring the Kardashians). Maybe he now wants to push his own label to become a more rarefied sanctuary.

I wonder about calls for a swing away from hoodies. Simons himself admitted responsibility for fashion’s adoption of the garment, which was a staple of his early shows. But now the garment is worn through societal change rather than fashion whim, the uniform of those who work from their phones. To keep its need for novelty satisfied, maybe fashion needs a new outline. But I’m not sure men themselves do. 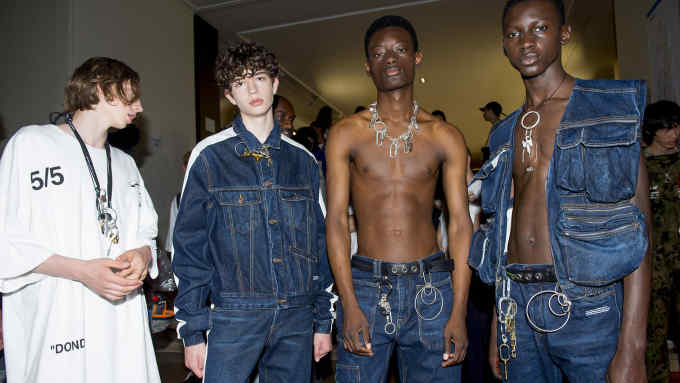