Michael Bloomberg, the billionaire media owner and former New York mayor, has stated for the first time that he is considering a run to become US president, a move that would dramatically reshape the 2016 race for the White House.

Gideon Rachman: American rage against elites
Yearning for leaders from the fringes will have profound implications

Speaking to the Financial Times, the founder of the eponymous financial information group criticised the quality of the debate so far. He said ​he was “looking at all the options” when asked whether he was considering putting his name forward.

“I find the level of discourse and discussion distressingly banal and an outrage and an insult to the voters,” Mr Bloomberg said in an interview, before adding that the US public deserved “a lot better”.

His comments follow a New York Times report​ last month that said the billionaire had told advisers to draft a plan for a run as an independent candidate that could see him spending as much as $1bn of his​ estimated​ $39bn fortune.

The first confirmation by Mr Bloomberg, who has considered running for the Oval Office in previous elections, comes as Donald Trump, the bombastic billionaire running a populist​ campaign, dominates​ the Republicans’ race. The property mogul has a significant lead in polls ahead of Tuesday’s primary in New Hampshire. In the Democratic race, Senator Bernie Sanders, the self-declared socialist senator from Vermont, boasts a sizeable lead over Hillary Clinton, the former secretary of state.

Mr Bloomberg told the FT that he would need to start putting his name on ballots across the US at the beginning of March. “I’m listening to what candidates are saying and what the primary voters appear to be doing,” he said.

His entry would radically affect the election, which has already been upended by the anti-establishment campaigns of Mr Trump and Mr Sanders. Many experts believe that Mr Bloomberg would help the Republican nominee by drawing more support from Democrats over Republicans because of his liberal stance on issues such as gun control and the environment.

Highlighting the steep climb that Mr Bloomberg ​would ​probably ​face, a poll conducted by his own news organisation and the Des Moines Register ahead of the Iowa caucuses found that only 9 per cent of Republicans had a favourable view of him, while 17 per cent of likely Democratic voters in the state ​had a favourable opinion.

Mr Trump ​has said he would be “very happy” if Mr Bloomberg entered the race, while Mr Sanders ​has ​criticised the prospect, saying it would confirm that the US was “moving away from democracy to oligarchy”. ​

​​Mr Bloomberg reportedly also has reservations about the campaign of Mrs Clinton, who has dismissed the threat of his possible candidacy by arguing that he would only ​enter ​the race if she was not the Democratic nominee. But the strong challenge being posed by Mr Sanders raises the chances that the Democratic nominee will not be chosen by early March, the point at which Mr Bloomberg would need to make a decision about entering.

While experts believe that an independent candidate would struggle in a system that is heavily skewed to favour those from the two ​main ​parties, the 2016 race has already proved the danger of ​accepting conventional wisdom.

A year ago, most ​experts predicted that the election would see Mrs Clinton face Jeb Bush, the former Republican governor of Florida, or Scott Walker, the Wisconsin governor. But Mr Walker ​dropped out early, and Mr Bush is struggling to save his campaign as he languishes in fifth place in the New Hampshire polls after doing badly in Iowa.

Mr Bloomberg was speaking as he launched the Task Force on Climate-Related Financial Disclosures, which was created to improve how companies report their exposure to climate change. He chairs the group, which was announced by Mark Carney, Financial Stability Board chief, at the recent climate change summit in Paris.

Mr Bloomberg has taken an increasingly hands-on role at his company since leaving the mayor’s office in 2014.

He had been expected to pursue his philanthropic endeavours, such as his work fighting climate change and his push for tighter gun control legislation. But the former mayor grew restless and went back to work full time at the company he co-founded in 1981.

His return was followed by upheaval in the upper echelons of the financial information company, with Dan Doctoroff, a long-time confidant, among the first to leave.

Mr Doctoroff was Bloomberg’s chief executive, a role that Mr Bloomberg took himself. Several figures from the news and editorial side of the business have also left or stepped back, notably Matt Winkler, the bow tie-wearing father of the company’s news operation and Mr Bloomberg’s right-hand man for 25 years. He was replaced by John Micklethwait, editor of The Economist.

The shake-up in editorial came as part of a greater focus on the company’s data terminals. Bloomberg is facing new competitors on multiple fronts, notably Symphony, a messaging service owned by some of Wall Street’s biggest banks, and low-cost operators, such as Money.net.

Brian Fallon, spokesman for the Clinton campaign, declined to comment, as did the Rubio campaign. 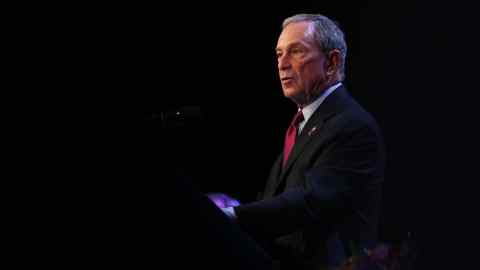 At a Sanders rally in Derry, New Hampshire, supporters said Mr Bloomberg’s entry into the race was unlikely to change their vote.

Christopher Anderson, a 49-year-old art dealer who described himself an independent voter, said of Mr Bloomberg: “I don’t care for him. There’s not much difference between him and Hillary — they’re all in bed with Wall Street and big corporations.”

James Coll, s 43-year-old teacher in US history from New York, added: “If he runs as an independent, how would he govern after getting support from Democrats and Republicans?”

Get alerts on Jeb Bush when a new story is published