German magazine Der Spiegel sparked international controversy in February when it published an editorial under the headline “Donald Trump is the world’s most dangerous man”.

Within three months of the publication of the article, Mr Trump has defied critics and pundits to become the presumptive Republican candidate in the US presidential election this November.

Most observers — including the global asset management industry — doubted the US billionaire would ever get this far.

But his unexpected ascent in America’s political hierarchy has raised some difficult questions for many of the world’s largest investors about just how dangerous, or beneficial, he could be for their portfolios.

Pimco, the world’s largest bond fund manager, believes Mr Trump is “all but certain” to receive the Republican nomination at the party’s convention in July, now that his two closest rivals, Ted Cruz and John Kasich, have dropped out of the race.

But Libby Cantrill, executive vice-president at the Californian asset manager, believes Mr Trump’s triumph provides few clues to investors about how they should react.

“A Trump candidacy does not make it easier for investors to anticipate the possible economic and market implications of a Trump presidency if he were to win the US general election in November,” she says.

James Clunie, manager of the absolute return fund at Jupiter, the UK-listed asset manager, believes international investors have been woefully slow to consider the ramifications of a Trump victory in November.

“A lot of people in the investment community think it is so inconceivable he could become president that [they] are not thinking about hedges. That is, collectively, a big mistake.

“[The US election] should be the talk of the town, but it’s not. Trump is a good wake-up call to stop thinking everything is fine [in the US], as we have done for the past six years. It is a good time to think about fragility in the States.”

To prepare for the possibility of Mr Trump winning in November, some asset managers are beginning to take a careful look at the potential impact of the controversial policies the US businessman has endorsed so far.

These include pursuing a protectionist economic agenda by scrapping the proposed Trans-Pacific Partnership trade deal, and imposing high tariffs on Chinese and Mexican imports.

Mr Trump has also indicated he wants to cut the top rate of corporate income tax from 39 per cent to 15 per cent, but will clamp down on the use of “inversion” deals that allow companies to shift their tax bases overseas.

Both Mr Trump and Hillary Clinton, the frontrunner for the Democratic presidential nomination, have pledged to plough money into infrastructure, and to ditch a tax break worth billions of dollars to private equity and hedge fund managers.

Some investors highlight healthcare as a sector that could suffer under Mr Trump, who has repeatedly promised to abolish Obamacare, the law that expanded access to care and the biggest medical programme for the poor in the US.

Other fund managers suggest shorting container shipping companies to prepare for a Trump presidency, as a break-up of trade agreements and the imposition of trade barriers could hurt trade, or betting against listed hedge funds and private equity firms in anticipation of more stringent taxation.

Mr Clunie recalls the run-up to the 2014 Scottish referendum on independence from the rest of the UK, when few financiers were prepared for the possibility of Scotland opting for independence.

He took out a short position against Caixabank, the Spanish lender, before the referendum, based on the theory that if Scotland voted to leave the UK, it would increase the likelihood of Catalonia, a wealthy Spanish region with its own language and parliament, becoming independent.

Although Scotland chose to remain in the UK, the referendum was much closer than pollsters originally anticipated. Mr Clunie believes the US election could yield similar surprises.

He has not found another “non-obvious” hedge to prepare his portfolio for a Trump presidency. But he points out other commentators have made the tongue-in-cheek suggestion of buying Canadian residential property on the basis that Americans could “flee” north of the border if Mr Trump wins.

Other investors point to the many sectors that could flourish under Mr Trump’s leadership, including banking and defence.

Michael Gregory, chief investment officer at Highland Alternative Investors, the Dallas-based asset manager, says: “Less aggressive banking regulation would be a lift for the big banks. Trump sees banks as having a material role in economic growth and lending, and has called for the repeal of Dodd-Frank [the financial regulation legislation].

Gillian Tett
How to Trump-proof your portfolio 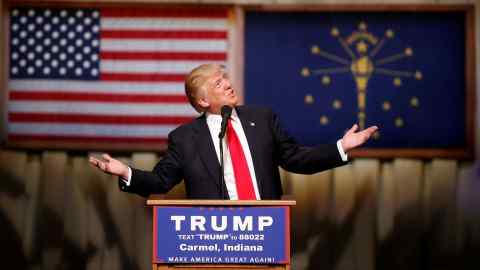 “We could expect defence and aerospace spending to boom during a Trump presidency as he looks to strengthen the US military. Increased cyber security and intelligence networks will also serve to benefit defence IT and communications.”

Yet most fund managers are reluctant to begin putting hedges in place and fine-tuning portfolios before they have a clearer sense of Mr Trump’s final position on issues such as taxation, infrastructure and healthcare.

The businessman’s existing policies are widely viewed as inconsistent and contradictory, making it difficult to predict what his ultimate position will be, although some suspect his final stance will be softer than the politician currently implies.

Martin Moeller, head of equities at UBP, the Swiss private bank, says: “The campaign has focused on the entertaining and ridiculous statements, [but], once elected, there will be less need for media attention and more focus on finding consensus with other politicians to get things done.

“I think President Trump would be more realistic and reasonable than Campaigner Trump.”

Investors are also torn over whether a Trump presidency is so unlikely that it is not worth preparing for or whether it is a viable possibility that warrants careful positioning.

Political surprises have abounded over the past two years, from the rise of the far-left Syriza party in Greece last year, to the UK Conservative party’s outright win in the 2015 general election. These unexpected developments have delivered painful lessons for investors and politicians alike.

Specifically in terms of the US election, Mr Trump is seen as a unique nominee who has so far broken all conventional rules about what makes a successful presidential candidate. This makes him extremely unpredictable.

Sushil Wadhwani, investment manager at GAM, the Swiss fund house, who is a former member of the Bank of England’s Monetary Policy Committee, says: “Much of the historical work on elections and markets suggests that it is the party that matters.

“This time is different. Trump is an unusual candidate as he is not a typical Republican. We might need to rewrite the rules in this case.”

The consensus is that investors should not rule out the possibility of a Trump presidency in 2017.

Americas economy
Obama fights back against Trump over US trade deals 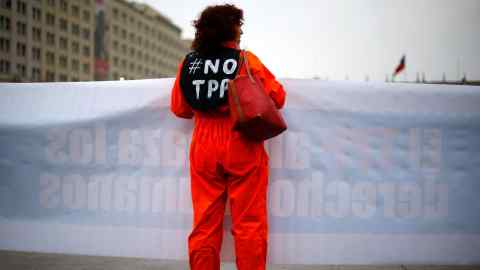 Steve Dexter, chief investment officer at Copper Rock Capital, a Boston-based asset manager, says: “Trump has repeatedly surprised. The talking heads like to discount his base as just a bunch of disaffected blue-collar rednecks, but in reality the post-election polls have shown that he has drawn significant support from middle- to upper-income college-educated segments of society.

“He also draws from both the Republican base and the Democrat. This means he could surprise and I would suggest most [investors] still view him as a long-shot loose cannon.”

The vast majority of US companies would prefer Hillary Clinton, the Democratic candidate (pictured), to become president rather than Republican businessman Donald Trump, according to new FT research published last week.

In a survey of business views on the US election, half of the 53 lobbying groups representing a range of US companies said they would break from the country’s traditional party of business to back Mrs Clinton, despite strong reservations about her candidacy.

Only a quarter of respondents backed Mr Trump, raising concerns about the billionaire property developer’s stance on global trade agreements and his unpredictability.

A quarter of respondents said they could not decide which candidate would be best for business because it was too early to judge their policy platforms.

Some asset managers believe US businesses can afford to be more relaxed about the election outcome.

Sir Michael Hintze, who founded British hedge fund CQS in 1999, told Americans to “get a grip” and stop predicting chaos under a president Trump, while speaking at the lavish Salt conference in Las Vegas earlier this month. The US political system is “strong enough to withstand whoever”, he said.

James Klempster, head of portfolio management at Momentum Global Investment Management, agrees: “The majority of investors surely believe that US-listed companies will find the means to thrive regardless of the political challenges they face. There will be winners and losers along the way, but the headline returns for the market will smooth these impacts out.”