Judging the consultants — how firms weigh individuals’ worth

Assessing effectiveness is more complex than who wins repeat business

“Consultants can demonstrate their quality only by their performance; the ones that succeed on the job will be sure of getting plenty of repeat business.”

This was one of the conclusions of a 1961 Financial Times report that attempted to answer the question “what are [UK management consultants] really aiming to be [and] how should their long-term objectives be defined?”

Nearly 60 years on, that verdict remains apt, to the point of being a truism. If a consultant satisfies his or her client, he or she is likely to win a new assignment. If not, not.

But assessing individual consultants’ performance is harder than that implies. Andrew Sturdy, management professor at the University of Bristol, says that “things have been balanced too far in favour of sales and sell-on, and against quality”. As he puts it: “There are very few clients who welcome and reward a consultant who says what they don’t want to hear.”

Naturally, consultants take issue with this assertion. Anna Purchas, head of people at KPMG UK, points out that the ideal consultant is a “critical friend” to clients. “You need to be able to challenge — and it’s one of the competencies we assess”, when deciding, for example, whether to promote consultants to partner.

Michael Garstka, managing partner of Bain & Company in the UK until February, says its consultants are encouraged to provide “supportive challenge”. His successor in the role, James Hadley, adds that it is possible to fall short either by being too abrasive or too friendly.

Judging consultants’ performance is rife with such complexity. The emphasis on winning repeat business is combined with “the difficulty of assessing and agreeing on outcomes”, Prof Sturdy says.

It is hard to apportion credit for complex, long-running, cross-disciplinary projects. Consulting is, after all, a “team sport”, as Mr Hadley says, where collaboration is vital. Ms Purchas points out that in many cases appraisal is complicated by the fact that consultants, unlike their counterparts in KPMG’s audit business, may spend years on a client engagement which is run by a manager different from the one who assesses them.

The big accountancy firms, for which consulting has long been a more lucrative business than audit, face the added difficulty of having to judge staff in the two main operations by different criteria. That can lead to infighting and jealousy, according to Laura Empson of Cass Business School, author of Leading Professionals, a book about how to manage such firms. Audit partners think of themselves as “reputation creators” and consultants as “breadwinners”.

Partners also fall prey, she says, to a self-sustaining “myth of meritocracy” that militates against reform: “Everybody who rises to the top believes they have risen there on merit and automatically believes it’s a good system, because it found them.” In pure partnerships, of course, the partners also own the business, creating a further obstacle to change.

Some of these drawbacks used to be solved by the “lockstep” system, whereby partners were paid according to seniority rather than by the fees they brought into the group. Lockstep had its own problems, though, including the risk of freeriding by lazy partners. Large consultancies — like many of their counterparts in law and accounting — have tended to vary, dilute or even abolish lockstep’s rigidities and allow more of an “eat what you kill” approach, closer to bonus systems used by corporate clients.

Andrew Hill
How do you decide who gets the chop in a professional services firm? 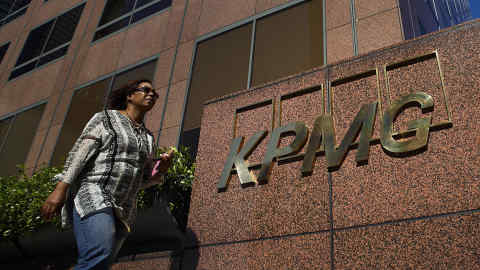 Mr Hadley says Bain’s “third way” is not just a mix between tenure- and profit-based rewards. Consultants are assessed on three dimensions: client outcomes, people outcomes, and intellectual property and expertise. Staff are asked to report, on a rolling basis, whether they would recommend others to work on their project. Bain uses this version of a “net promoter score” (used to gauge whether customers would advocate a particular service or product) to monitor where there may be difficulties with specific clients, teams or individuals.

KPMG UK assesses its consultants against a framework consisting of technical skills, sector expertise, and “core consulting and leadership”. The framework was introduced two years ago in part because KPMG needed to be able to assess outside recruits, and to be sure that it avoided any unconscious bias in its appraisal system. It has also re-emphasised the importance of behaviour and values. As part of an effort to recover from a reputational crisis, KPMG has cut some partners and seen others retire. “When we got this right, we were having a fair conversation with [partners] about their skills and the way the world is changing,” says Ms Purchas.

Some of that change comes from below. Prof Sturdy detects an evolution in the attitude of bright graduates “who might be less inclined to follow the money”. Bain’s Mr Hadley adds: “There’s a generational shift in terms of how individuals see the definition of results we’re getting with our clients.” That is unlikely to end consultants’ traditional chase towards the goal of repeat business, but it is sure to make it even harder to appraise how they reach their destination.