EU prepares call to speed up plans for no-deal Brexit

EU leaders are to call on member states, companies and organisations to step up preparations for a no-deal Brexit amid concerns that the UK has made “no substantial progress” on the Irish border, the biggest sticking point in the talks.

Draft conclusions for a summit of EU leaders next week offer a stark, four-paragraph overview of negotiations that have largely stalled since March on the most important political issues.

In an unwelcome warning for Theresa May, British prime minister, the summit text says contingency planning for a hard exit in March 2019 must be accelerated.

“The European Council renews its call upon member states and all stakeholders to step up their work on preparedness at all levels and for all outcomes,” the conclusions state.

The prospect of a no-deal Brexit is also at the centre of parliamentary machinations in Westminster, as Mrs May seeks to quash a rebellion by pro-European Conservative MPs who want to be able to stop the prime minister from taking Britain out of the EU without an agreement. On Tuesday evening, Mrs May and the rebels were involved in talks to find a compromise deal to avoid a showdown.

While the prime minister has dropped her previous rhetoric that “no deal is better than a bad deal”, instead insisting that her government seeks an ambitious accord with Brussels, her supporters argue that Britain needs to maintain the option of walking away from talks to maintain its leverage.

Video: Why Ireland could shape the Brexit deal - or doom it

The EU side acknowledges progress in parts of the withdrawal talks, covering relatively uncontroversial areas relating to Britain’s divorce.

But frustration is growing in European capitals over the slow pace of negotiations on Ireland and the future relationship. “It is going nowhere and it is clear to everyone,” said one senior EU diplomat, who expected the talks to drag on into the winter.

British officials are, in turn, showing annoyance at what they see as inflexible EU positions that prevent a creative discussion about Brexit solutions, particularly over the commitment for a “backstop” to avoid a hard border in the island of Ireland if other solutions fail.

While the European Commission’s proposed backstop would keep Northern Ireland under EU rules even as the rest of Britain went its own way, Mrs May’s government has instead proposed a time-limited backstop that would apply to the whole UK.

In response to the EU draft summit conclusions, Mrs May’s spokesman said: “We have put forward a proposal in relation to the backstop and Northern Ireland. We look forward to discussing that with the EU further.”

Michel Barnier, the EU’s chief negotiator, has dismissed the UK proposals on the backstop as flawed and incomplete. 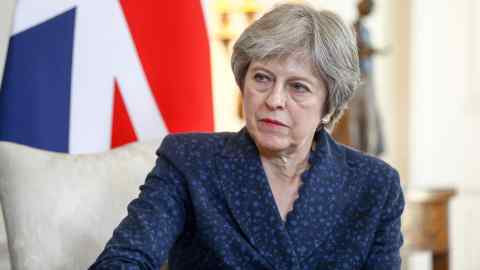 In what he presented as a call for greater realism by London, Mr Barnier gave a speech on Tuesday in which he ruled out UK participation in the European Arrest Warrant and full access to EU law-enforcement databases. He said this was a result of the British government’s “red lines” on issues such as the role of the European Court of Justice.

“They want to maintain all the benefits of the current relationship, while leaving the EU regulatory, supervision and application framework. And they try to blame us for the consequences of their choice,” Mr Barnier said. “Once again, we will not be drawn into this blame game. It would mean wasting time we don’t have.”

But at present Mrs May’s government is primarily focused on the domestic battle to overcome the small number of pro-European rebels who could be responsible for its biggest defeat to date over Brexit legislation.

With a crunch vote looming on Wednesday on the EU withdrawal bill, Mrs May met the rebels to urge them not to undermine her negotiating position in Brussels. A revolt by only a dozen Conservative MPs could see her defeated.

Some of Mrs May’s allies insisted the rebels were starting to wilt under the pressure and that only a hardcore of about six or seven MP would vote against the government. But one senior pro-Remain figure said: “I don’t know who is telling you that. We are standing firm.”

Chuka Umunna, a leading Labour pro-European MP who is working across party lines with Tory rebels, claimed that the rebels were being subjected to “all manner of threats” including the possibility of deselection. “It is an affront to parliamentary democracy and totally unacceptable,” he said.