Lift the gold lid of a tub of Halo Top ice cream and you will be greeted with a cheery message printed on the seal, such as “Save the bowl”, “Stop when you hit the bottom” or “Guilt-free zone”.

The slogans encapsulate the promise that has earned the low-calorie, high-protein ice cream a legion of fans since it was created by Justin Woolverton as an experiment in his Los Angeles kitchen in 2011.

Halo Top offers the indulgence of premium ice cream but with much less of the sugar and fat contained in traditional brands such as Ben & Jerry’s or Häagen-Dazs. A 473ml tub of Halo Top’s Chocolate Chip Cookie Dough will set you back 360 calories, compared with 1,120 for the Ben & Jerry’s equivalent.

Halo Top’s simple proposition, paired with the online marketing savvy of Woolverton, 39, and his business partner Douglas Bouton, 33, has won over calorie-counting consumers. In barely six years, Halo Top has become North America’s sixth-biggest ice cream brand, with a 3.7 per cent market share in 2018, according to Euromonitor data. The private company does not disclose financial information, but its co-founders say it has about 120 employees, and is profitable and growing rapidly.

Woolverton and Bouton have retained majority control after declining several takeover offers and raising $1.5m from a combination of friends and family, angel investors and crowdfunding.

To build on its success in the US, Halo Top has embarked on an international expansion drive, launching last year in the UK and Canada with flavours such as Peanut Butter Cup, Mint Chip and Birthday Cake.

The looming challenge will be to encourage international consumers to develop a taste for Halo Top by adapting its sales pitch to countries with differing food cultures and dietary habits.

“So far in the UK, we’ve seen the same meteoric growth as in the US. We outsell Häagen-Dazs in Tesco [the UK’s biggest supermarket chain],” says Bouton with a hint of disbelief. “It was so hard to build the company in the first few years — we almost went bankrupt. But now we’ve gotten to a level of stability so we can actually enjoy it, innovate and build the business.”

The two Californians, who knew little about ice cream or retail when they started out, surprised many industry executives who scoffed at the idea that a newcomer could break into a category that has long been dominated by multinationals Unilever and Nestlé. 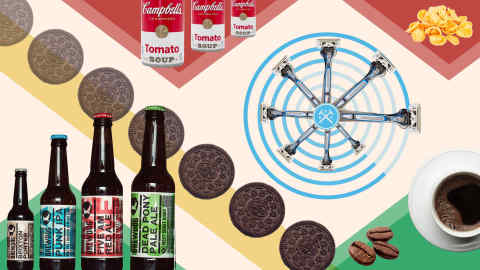 In the process, Halo Top has become a poster child for the new reality shaking the consumer goods industry: the rise of challenger brands in everything from razors to dog food. Pitching themselves as greener, more local, more authentic or healthier than mainstream products, these upstarts often sell directly to consumers via online channels and use social media to attract attention.

Graeme Pitkethly, Unilever’s chief financial officer, admits the consumer goods giant “had missed the trend in the US” for healthier ice cream and that Halo Top is taking share “very, very quickly”. Unilever and Nestlé have scrambled to catch up; both have introduced copy-cat “healthier for you” ice creams in the US. Launched in mid-2017, Unilever’s Breyers Delight mimicked Halo Top by placing the calorie count in large figures on the tub label.

Bouton says the new rival brands were not totally unwelcome, although their arrival slowed Halo Top’s growth last year. The company’s US retail sales in 2018 fell 6.4 per cent year on year to $329m, while units sold rose 4 per cent to 77.5m, according to IRi, a Chicago-based market research firm.

“It validates the market for healthier ice cream, which we pioneered,” says Bouton. “But there are now too many brands for the space, so retailers will cull the brands and keep the best ones.”

So how did Halo Top go from being a creation in a home kitchen to filling supermarket freezers? It began with Woolverton, who in 2011 was working as a corporate lawyer in Los Angeles but was bored with his job. A fitness buff who was keen to optimise his diet, he experimented with fasting and often cut out sugar to help control his hypoglycaemia. However, he had a sweet tooth and missed eating ice cream.

Seeking alternatives, he started tinkering in his kitchen, first by freezing Chobani, a brand of thick, high-protein Greek-style yoghurt, and adding fruit and sugar substitutes.

Woolverton hit upon a recipe that was sweetened with stevia, a sugar substitute made from a leafy shrub native to Paraguay, and erythritol, a no-calorie sugar alcohol found in fruits such as pears and grapes that adds texture; both ingredients can, therefore, be described as “natural” in marketing materials. The recipe also includes milk, cream and air.

Now we’re at a level of stability, we can build the business

But scaling up from batches made in his kitchen was not easy. Woolverton looked for “co-packers” — manufacturers that produce packaged foods under contract, often for big food companies or retailers.

The existence of such outsourced manufacturing capacity has been an important factor in the rise of challenger brands in the consumer sector. Without it, few would have be able to turn their ideas into real products at scale.

After almost a year, Woolverton figured out how to make bigger batches of his ice cream and signed a deal with a California-based manufacturer. Using credit cards and loans, he paid a designer to create the packaging and logo, and convinced a local gourmet store to carry the product. He then enlisted Bouton, a friend who was also a lawyer, to join him scaling up the business. 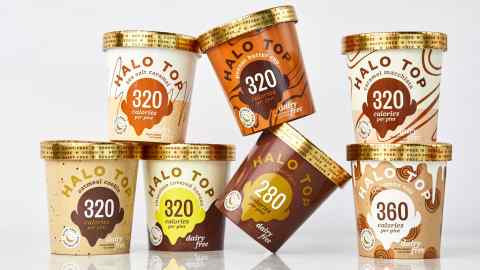 They built the brand initially by using targeted Google search ads and marketing on Facebook; they eschewed television adverts, which they could not afford anyway. But the most important channel for building the brand was Instagram, the photo-sharing app. Halo Top gave free samples to thousands of “influencers” — athletes, gym trainers and healthy-living gurus — with a critical mass of followers the company thought might like the product. “We were constantly reaching out to people to try to get the word out about Halo Top,” explains Bouton.

A viral news story in early 2016 was a catalyst for the brand: a science journalist for GQ magazine ate nothing but Halo Top for 10 days and lost more than 4kg. Sales took off.

However, success attracted imitators, and the arrival of competing products in the US made Halo Top realise it needed to expand abroad or risk losing the first-to-market advantage that was crucial to its local success. “With their scale, we knew Unilever and Nestlé would be able to roll out their healthier ice creams much more quickly than we could,” says Bouton.

In mid-2017, the business partners began to determine how to get Halo Top on sale in as many countries as possible, as fast as possible.

This was harder than they expected. Since their ice cream was manufactured in the US, it would have to be shipped internationally and be kept frozen during transit.

Figuring out local regulations and securing distribution were also a headache. “I felt like I was banging my head against the wall because we were having to reinvent the wheel for every new market,” says Bouton.

Then over the summer of 2017, Bouton heard from a stranger offering to help. Matt Fulbrook, a former sales director for Ben & Jerry’s in the UK, sent him an email, asking if Halo Top had thought of expanding to the UK. “We are a team of three ice cream guys with over 50 years collective experience within the UK ice cream sector . . . and know there could be an opportunity here for you,” Fulbook wrote.

Within weeks, the two had met and signed a deal under which Fulbrook’s company, Brand of Brothers, would help Halo Top expand to Europe in exchange for a commission on sales. That connection enabled Halo Top to obtain UK distribution quickly. Tesco was the first to sign up, and by the fourth quarter of 2017, eight other customers, including supermarkets Sainsbury’s. Morrisons and Asda, had also agreed to stock the ice cream.

On the branding side, Halo Top knew it had to tailor its advertising and marketing for a British audience or risk not connecting with consumers as it had in the US. “Our brand’s voice has to be authentic and genuine — the antithesis of the big corporation or conglomerate,” says Bouton.

Halo Top hired local staff and ad agencies, and produced an ice cream flavour called Lemon Wedding Cake: a homage to the choice of Meghan Markle and Prince Harry for their wedding cake last year. Halo Top’s efforts appear to be paying off: in its first year on the market, the company recorded UK sales of £20.2m, according to IRi.

The group found a contract manufacturer in Germany, which will soon start making the ice cream that is sold in continental Europe, replacing stock currently shipped across the Atlantic. Halo Top has also started selling in the Netherlands and Germany.

“We’re in 12 countries right now,” says Bouton. “If we wanted to, we could double that quickly, but we want to go slower to make sure we do it right.”