The former FT columnist had hopes of becoming a silver fox. It didn’t go as planned

The young man at Hackney Picturehouse took my money, gave me a quick glance and asked: “Will that be a senior’s ticket?”

Every woman must remember the first time she is taken for an old-age pensioner. My outrage was prodigious — and preposterous, given that, at 58½, I am a mere 18 months too young to claim a cut-price cinema ticket.

Yet what was most distressing about the exchange was its timing. It was my first outing to the cinema since going grey. Things were not going to plan.

For years my relationship with my dyed brown hair had been getting increasingly dysfunctional. Every time I caught that saturated orange/green tinge that all fake brown tends towards, I resolved to stop.

My life seemed measured out, if not in coffee spoons, then in strips of tin foil at the hairdresser. Each trip cost well over £100 and took at least three hours. Sometimes I’d paint the colour on myself over the bathtub — which took 10 minutes and cost about a fiver — but the result was so horrid I’d be back at the hairdressers the next time.

Who was I fooling in pretending I had a full helmet of brown hair at the end of my fifties? Certainly not myself.

Yet still I hesitated. My then hairdresser (not entirely a disinterested party) was set against it. When I pointed out that grey was fashionable, she explained it was only so if you weren’t grey naturally. On older people, she said, grey hair made the skin look grey, too. If she’s right, this suggests a design flaw of the part of God: he should have made us grey at birth with colour only arriving in late middle age.

In search of support, I looked online, only to be further discouraged. There were a few blogs from American women who had taken their hair “on a journey to grey”. Which, given my aversion to all spurious “journeys”, was an excellent reason for staying put, hair-wise.

My only true role model was my ex-colleague Sarah Gordon. She wrote a barnstormer of an article on these pages a year and a half ago about going white. She pointed out how rabidly sexist is our approach to grey — distinguished, even sexy in a man, merely old in a woman. When it comes to hair, she said, it’s as if the 1960s never happened. The bit I liked best was the surprising news that going grey doesn’t actually make you look older. There was a study in which people were shown pictures of the same woman with grey and brown hair — there was almost no difference in how old she was judged to be.

But even then I prevaricated. It wasn’t until I’d uprooted my career and left journalism for teaching that I was ready for the bigger decision: to go grey.

All summer long I let the brown get bleached to yellowish straw and let the grey grow in. Just before the start of term I went to a new hairdresser, the Glasshouse Salon in Hackney, to have most of it cut off and cream streaks put through the rest. I liked it at once. I felt I could meet my own eye in the mirror and think: yes, that’s what I look like. It’s fine.

The impression on others was equally instant. On crowded trains, passengers leapt to their feet offering me their seats in a way they never did even when I was nine months pregnant.

None of my dyed friends could bring themselves to discuss it, though the three acquaintances who are also grey welcomed with open arms another member into their sparsely populated club.

At school a couple of weeks ago, I was telling my year 7 class about my old life in journalism and showed them a picture of me in the FT taken two years ago. They stared blankly. When I said it was me, there was an amazed gasp. “Was that when you were young, Miss?”

Another moment came when I had written some worded problems for them. One read: “Trevor is 11 and a half. He is one-fifth my age. How old am I?” This particular class struggles with fractions, and so some of them decided to skip the calculation and go straight to the most plausible answer. “Is it 75?” one of them called out.

So, Sarah, my experience suggests you couldn’t have been more wrong about how the sight of grey on a woman’s head alters how others see her. And you were wrong about something else, too. You said a few people told you how brave you were to go grey and how you assured them that changing your hair wasn’t brave at all.

I hate to tell you that “brave” spoken by one woman to another about her appearance nearly always means foolhardy. And in any case, you were brave. And so am I.

I’m constantly congratulated on my bravery for giving up journalism to be a maths teacher. I deny this, too. I’d had it with journalism, and so to retrain doing something I wanted to do was not brave at all. By contrast, I think my new hair is miles braver than my new career. I have wittingly done something that makes everyone I meet assume I’m ancient. It wouldn’t be brave if I didn’t care. But I’m as vain and trivial as the next person and I do care. Yet even so, I don’t think I’ll go back.

Grey is a one-way ticket. Once you have revealed your true colours (or lack of colour) to the world then to revert to brown would mean the pretence worked even less well than it did before.

Never mind that I’m in a minority of one, I still genuinely do like how I look. I don’t look older to myself. Oddly, I look younger, but that is because I feel better and am doing new things. In extremis, I could put a highlight in every now and then, but I doubt if I’ll bother.

What I must do now is convince myself that if people think I’m a pensioner, it doesn’t matter. My one grey-haired friend assures me she has come to love the seat she always gets on a crowded train. So I have resolved to do the same: to smile nicely, thank the person who has given up a seat, sit down and get out my marking.

If you’re letting your grey hair grow in you’ll need to change your habits. With grey hair, it’s super important to keep the hair hydrated and smooth. Use a shampoo that will clean gently (grey hair needs to look clean so you may want to shampoo every day) then a deep conditioner that must be combed through. A mask once a week will add that extra level of conditioning. Grey hair needs to shine and sparkle to give the colour reflection and life. (Redken All Soft Shampoo, £9.72, lookfantastic.com)

My top tip is to adopt the “no-shampoo method” used by Californian and Brazilian women, who wash their hair with masks or conditioners to avoid damaging weakened hair. If you decide to embrace the grey, be careful not to allow it to become frizzy. And ban extensions as they will be visible through finer, more fragile hair. (Christophe Robin, Regenerating Mask, €53, Christophe-robin.com)

I started going grey in my teens and have tried everything. All those blue/purple-toned shampoos actually stain my hair: I’ve tried a lot of them and they all leave a blue tint, which is irritating. I love the Oribe Silverati line of products (pictures below, £41 for shampoo and £44 for conditioner, spacenk.com), Nexxus shampoos, conditioners and leave-in conditioners such as their Encapsulate Serum and Youth Renewal Elixir drops (pictured above, £29, escentual.com), which is a leave-in for “ageing hair” so I think it’s good for grey. I also like Shades EQ Gloss, by Redken, a semi-permanent colour that makes the hair brighter. However, I find ordinary shampoos are just as good.

When it comes to products for men in particular, I would avoid a matt wax as it can make the hair look dull and greyer. Opt for a product with shine and add luminosity with my Jo Hansford Illuminoil (£29, johansford.com). I would suggest a short, sharp cut to keep hair looking chic and classy. And get a trim every six to eight weeks to keep ends looking sharp. 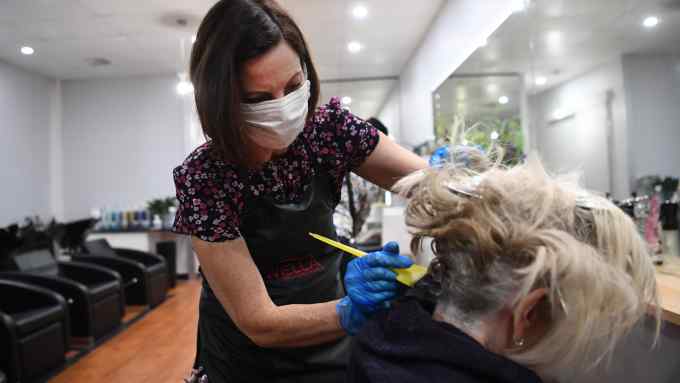