Before she quit her job at Universal Music Group to become a full-time jazz singer, Lauren Henderson, 33, used to moonlight as a performer at bars and restaurants in New York. Dashing across town after a day making television adverts, she just about had time to change and sound-check before heading on stage.

“I really wasn’t sleeping much. Sometimes they would ask me to do an extra set, and I would go into the night, knowing I had to get up at 6am the next day for a meeting,” says Henderson, who spent her breaks at work going through songs and jotting down musical arrangements.

By 2014 the juggling act had become too much. Having built up enough contacts and work, Henderson decided to pursue music full time. Five years later, she is a performer with five albums and tours of Europe, South Africa, Mexico and Russia under her belt. Alongside this she runs her own record label and has an executive MBA from IE Brown.

The path towards executive education started when Henderson wanted to make her first album. She researched the industry and spoke to different labels but became unstuck as many wanted to own the rights to all her music as part of the contract.

Her experience in television production gave her an advantage over many of her musician peers when deciding which label to choose. Many artists head into the industry straight from music school and have little understanding of management and production. But Henderson felt that loss of rights also meant she risked losing autonomy over the direction of her career and music, which she says is influenced by her mixed African-American and Caribbean heritage.

“I wanted to be taken seriously and to effectively ask for what I wanted and needed as an artist,” says Henderson. “I wanted to feel equipped to handle various aspects of my music business. I didn’t want to rely on other people.” But for this, she needed more insight into how business worked.

She was already familiar with IE Brown — which is in Providence, Rhode Island — having grown up in neighbouring Massachusetts. Using savings and a loan, she enrolled on its EMBA in 2017. “I thought this would be a great experience for me to learn from others and advance,” she says. The 15-month course kicked off with two weeks at IE in Madrid, followed by stints in Providence and South Africa. The course was a combination of in-person and online sessions, allowing Henderson to continue touring.

As the only professional musician on the programme, Henderson appreciated the diverse cohort. “We had a surgeon, people from [consultancy] Deloitte, from Wall Street, a sommelier, an art critic,” she says. “I learnt so much from them. We were all balancing our careers and some people were making transitions.”

During the programme some students welcomed babies into the world, while others had relationship problems or family bereavements. Maintaining a balance between studying, work and personal commitments was tough. “I didn’t expect to sleep much and I didn’t,” she recalls. “Because we worked together so much and travelled the world together as a cohort, we really helped each other through.”

Henderson was busy making her own transitions too. While managing her work as a performer and her studies, she set up her own record label, Brontosaurus Records. “It quickly became apparent I could navigate this on my own and be in control of how I’m represented as an artist and how much money I’m making,” she says. “The label is new and the opportunity to study business seemed to arise at the perfect time.”

The artist and new business owner found the marketing course particularly valuable. “Really going deep into why things appeal to different audiences or having goals and deadlines — looking at things in an organised manner — was very helpful to me,” she says.

There were some surprises too. “Economics was something I was so nervous about because I had never taken it before — it was one of my favourite courses,” she says. She found the topic intriguing and feels empowered by her new understanding. “In the past, even when I was doing taxes, I would basically have no idea. Now I feel informed,” she says.

The musician has noticed a big change in her approach to her business since taking the EMBA. She is still paying off the loan but feels strongly that it has been worth the investment. “I’m already doing things more efficiently. I have a better understanding of what I’m putting out there,” she says, from analysing the market and adapting marketing strategies for different regions, to how she communicates with venues.

Henderson admits she was a “people-pleaser” before but says the EMBA has helped her be more comfortable balancing business needs and personal relationships. “Before, I wanted everyone in the band to make X amount of money and to stay in a really comfortable hotel, but if I can’t provide that I need to come up with another solution, to make sure I’m making money and not losing it,” she explains. She is also more confident working with her accountant, expressing what her financial goals and expectations are for the fiscal year.

Many freelance musicians in the US cannot take advantage of the benefits of health insurance paid for by an employer, she says. “We have to figure out how to pay medical bills and insurance, while balancing a career that doesn’t always guarantee you the next pay cheque.”

Through Brontosaurus Records she wants to give other artists the confidence to develop their business acumen. “I see this all the time: artists are taken advantage of as they can’t express what they need and what their limitations are,” she says. “When you sign a contract you need to be sure you are reading the fine print and what is happening with the [master recordings] of your work. Over the years I have learnt the different sticky situations you can get in if you are not aware of what is going on.” 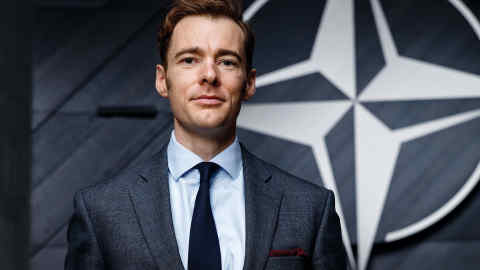 Brontosaurus is a small, boutique label that lets its artists manage the rights to their work. Henderson works with several artists on a freelance basis, but as of October she only represented four in addition to herself — they have to be the right fit for the label, and she also wants to make sure she has the capacity to fully support each one.

Alongside helping artists with creative matters, Henderson works with them to develop personal career plans and goals. “I do whatever I can to prepare my artists to be entrepreneurs, as well as to own and develop their intellectual content,” she says. This includes selecting artists who can “collaborate with one another to learn, grow and develop musically and from a business perspective”.

For now, Henderson manages Brontosaurus Records on her own and is happy with it being a small label, though she plans to expand gradually. “Having worked with Universal, the people that bring in the most revenue are the priority, but that can create problems for emerging artists,” she says. “Quality over quantity is the way to go, especially in jazz or Latin jazz, which is such a nice art form.”

She intends to run the label while performing as much as she can herself, which means balancing her time and focusing on realistic goals. “While I’m still young I think about my retirement, and what I want to do later — I hope to be wheeled out on stage still singing,” she says.