Dramatic destinations to explore by boat

It’s time to hit the water, from Turkey’s Turquoise coast to Alaska’s Inside Passage

People you know may have been to Komodo, the Banda islands or Raja Ampat, the three vertices that make up eastern Indonesia’s “coral triangle”, which harbours some of the best diving, and diversity of marine wildlife, in the world. (The thrills of riding the gentle currents through the Technicolor corals at Melissa’s Garden and watching mantas with six-metre wingspans cavort offshore of Arborek island remain, for me, unmatched.) Chances are, those people you know saw this part of the world from a boat – and chances are even better that the boat was a traditional sailing phinisi, built on South Sulawesi in the tradition of Bugis pirates. These (like hotels, airports and, alas, fellow travellers) have multiplied at a prodigious rate across the region.

But the best are still the best, and near the top of that list is Dunia Baru, the seven-cabin yacht that’s the only wooden vessel classified by Biro Klasifikasi Indonesia, the national maritime regulator for Indonesian waters. It has 18 full-time staff, including dive masters and instructors, a chef and a spa therapist to serve the needs of 14 guests.

The interiors are sleek and stylish, all burnished ironwood and swanky cabins with en suites; no side berths here. The Singaporean owners had chartered it back in 2015 and liked it so much they bought it; already avid conservationists, they’ve leveraged Dunia Baru’s range to bring medical teams and coral researchers to remote corners of the country where they’re needed. duniabaru.com, from $120,000 a week via y.co

Temple tours and island picnics on the Nile

Egypt is on fire as a destination right now, and a Nile cruise a de rigueur part of any itinerary. Nour El Nil’s fleet of six beautiful dahabiyas range in size from 37m to 57m, and 8 to 12 rooms. The Aswan to Luxor routes take in, among other sights, the temples of Khnum and Nekhbet and Gebel Silsileh (the bigger Nile cruisers aren’t permitted to call in here, so those aboard a Nour El Nil boat sometimes have the site to themselves). Guests are taken by horse and carriage through ancient market towns; they picnic on islands and swim in the river.

Most of all, though, they revel in the exquisite design and atmosphere aboard: the decks, lounges and suites are all furnished with impeccable style – think layered kilim and soumak rugs, handmade furniture, original oil paintings, brass reading lamps and libraries filled with well-worn novels and biographies. nourelnil.com, from €1,325pp for a five-night cruise

Charting a course for wows in Alaska

Calving glaciers and extinct volcanoes. Bears, orcas, moose. Gold Rush towns and First Nations heritage sites. Two of America’s finest national parks. There’s a reason people come from the ends of the earth to see Alaska. Likewise a reason so many do it from a boat, whether a cruise ship or an expedition yacht. All the finest of both categories, from Regent Seven Seas to Lindblad Expeditions, operate from May to September up and down the Inside Passage – home to many of the state’s most impressive sites, and largely inaccessible from the interior. UnCruise Adventures has made a name for itself with adventure itineraries that marry land excursions with sea ones (half-day treks are for the taking if you want one, as is polar plunging). Its 11-cabin Safari Quest, sleeping 22, isn’t conventionally luxurious in any sense: there’s a hot tub on the deck, and rooms are cosy but simple. What Safari Quest has is far more agility and range than most of the bigger boats, allowing rare access to particularly remote inlets and wilderness sites. uncruise.com, from $8,395pp for seven nights

All about the gulet in the Turkish Aegean 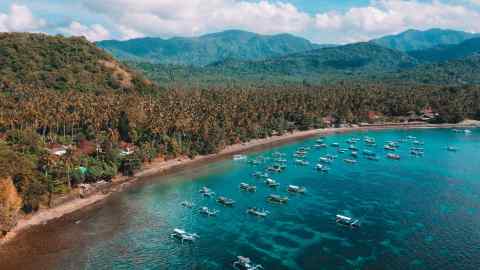 Onetime banker Michael Bird fell for the Croatian island of Vis many years ago on holiday; his purchase of a home there was followed by the establishment of a boutique charter company, Dalmatian Destinations, which started with a few crewed sailing boats and gulets that plied the Dalmatian Coast. He’s since expanded both the fleet (there are some smart motor yachts) and the geographical range as well, making Turkey’s Aegean coast another speciality area of his. A fleet of smaller (18m to 30m) and more authentic gulets sleep 10 guests, and come with a skipper and a chef. You board in Bodrum and cruise to Marmaris, taking in the Datça peninsula, the ruins at Knidos and Gebe Kilise, the splendid mosque at Selimiye and more (not least an abundance of hidden coves with gorgeous turquoise waters). dalmatiandestinations.com, Turkey charters sleeping 10 from €30,000 for a week-long cruise